“WHAT AM I TRYING TO HIDE?” 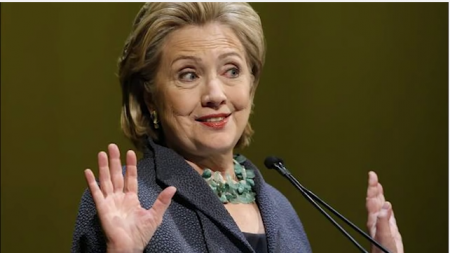 (Aug. 31, 2016) — Well, what do you know… elements of the mainstream media are finally beginning to emerge from their HRC swoon, probably better described as an objective reporting coma.

No less than the Associated Press has had the temerity (some might call it “principle” or a “journalism epiphany”) to report that, during HRC’s occupation of the office – it would be inaccurate to state that she “served” the nation as its Secretary of State – she met with scores of persons who just prior to the meetings (usually orchestrated through HRC aide Huma Abedin) had “just happened” to have made “modest donations” to the Clinton Foundation.

And by “modest,” we mean “huge.” The AP report states that in the aggregate, there were at least 85 donors who contributed as much as $156 million. AP also reports that at least 40 donated more than $100,000 each, and 20 gave more than $1 million. And. of course this was not even close to a “pay-to-play” shakedown. How could you possibly even imagine something that crass… you… you… “alt-right” conspiratorialists?

Recall that the AP story was based on e-mails “recovered” by the FBI and WikiLeaks… yes, those e-mails that HRC and her lawyers tried to relegate to their own 1984-esque “Memory Hole.”

But wait…. there’s more. Stay with me here, because this gets better.

First, we now learn from the Benghazi Select Committee that some extraordinary measures were taken by HRC and her enablers to make sure that no one – meaning from deities on down to absolutely anyone in a position to prosecute – would ever know what was in those “personal” e-mails. Indeed, it was that committee where we first learned that HRC maintained her own “homebrew” computer server.

The committee’s efforts were pilloried by a sycophantic media intent on painting the committee (along with its chairman, Congressman Trey Gowdy), as being nothing but a politically-motivated ploy to embarrass both the current regime as well as HRC in her quest to succeed the Usurper at 1600. In short, it was a groundless witch-hunt.

Memo to the electorate # 1: it looks like we are getting closer to finding the real witch.

It turns out that HRC and her lawyers, after identifying some 30,000 “personal” e-mails which they “claimed” had no secret or classified information in them – just yoga routines and wedding plans – not only hit the “delete” key, they resorted to one of the most sophisticated computer disk and cache cleaning software programs available, to wit: “BleachBit.”

Indeed, as a marketing tool, BleachBit’s homepage now advertises (Main site tab) Chairman Gowdy’s comment about HRC’s use of the software to destroy the evidence contained in the e-mails. He stated that her actions were intended to so corrupt the e-mails that “even God couldn’t read them.”

Really? It is never wise to place wagers against God. That aside, why would HRC and her lawyers want (or need) to so completely destroy the information in the e-mails, and then continually lie about eradicating them? What super-duper secret yoga positions were discussed in them? What highly-sensitive “eyes-only” color schemes for bridesmaid’s gowns were disclosed? Moreover, HRC’s juvenile “What, like with a cloth?” response to questions about her disk-cleaning habits merely underscores her anxiety and disingenuous character. Sort of like dodging sniper fire in Bosnia.

Wait… wait… maybe there is… a different reason.

What if… hypothetically speaking, of course…, what if the information in the e-mails did not relate to yoga positions or bridesmaid’s gowns? What if the information was instead so sensitive…, so radioactive…. perhaps even so incriminating that its complete and utter destruction… so much so that even God could not retrieve and read it… was imperative? Curious? Read on.

On the BleachBit “Documentation” tab sub-site – conveniently linked here – one can scroll down the left column to the link for “Shred files and wipe disks.” There, one can learn some really interesting facts relating to how the software works and, more importantly, why people who want to destroy the content of things on their computers should consider using the software.

For example, scrolling down to the section entitled “How secure are BleachBit’s methods?” one finds the following: “When used appropriately, BleachBit’s data wiping features are generally sufficient to hide traces of most data from most people.” The website then continues: “Even more important than asking how secure an application or technique is, start by asking yourself….” four questions.

The first question is: “What am I trying to hide?” The second question is: “How much harm could it do if disclosed… [and might it] … shift global political power?” The third question is: “Who would try to find it … [perhaps] … a superpower government?” The fourth question is: “How much time, money, and skill does that entity have … [and] … how much is it willing to spend to find your secrets?” The site then notes: “The answers to these questions will lead you to the appropriate level of caution.”

So, with the answers to these questions in your mind, if you were HRC or one of her sycophantic apparatchiks (or even co-conspirators), would you seek out BleachBit to try to eradicate your yoga positions or bridesmaids’ gown pastels? Or is the more likely and plausible conclusion that BleachBit was selected because the information contained in some of the e-mails may have related to things exponentially more lethal to BHO’s “legacy” and/or HRC’s Oval Office fantasies?

Bear in mind, we now know, courtesy again of the AP and – amazingly – Time Magazine, that the FBI has recovered an additional 30 e-mails from the HRC computer that were never turned over to the State Department. Those 30 e-mails all relate, in some way, to the September 11, 2012 attack on the U.S. “Special Mission Compound” in Benghazi. These new e-mails have come to light in the context of ongoing litigation brought by Judicial Watch. Those folks need a medal.

Ironically, the State Department’s lawyers said they would need until the end of September to review the emails and “redact potentially classified information before they are released.” Really? HRC keeps highly-classified information on an unsecured, rinky-dink Lego home computer – available for anyone from Guccifer to Joe Blow from Kokomo to hack into it – yet skates on a felony indictment thanks to an incompetent FBI director and marionette U.S. Attorney General… but the attorneys need more time to redact “classified information?”

Seriously? As if BleachBit was not enough, now the State Department lawyers want to try to re-eradicate information in the e-mails not already destroyed by BleachBit.. What, pray tell, could still be so “classified” or “secret” or “incriminating” to require additional erasures by some of the same lawyers who may have been responsible for resort to BleachBit in the first place? As noted here, here, here and finally, here, a quick word-search of these newly-recovered e-mails could be very illuminating.

If, for example, such a search were to disclose any instances of the words “kidnap,” “abduct,” “Morsi,” “Abdel-Rahman,” “Butner” or other terms which might support the conclusion that the Benghazi event was a botched kidnapping attempt wherein Ambassador Chris Stevens would be exchanged for the Blind Sheikh, Abdel-Rahman, for political purposes, it would go a long way toward explaining why HRC and her lawyers went to the lengths they did to deep-six those e-mails.

The truth always comes out, eventually. The big issue now is whether the truth about what was really behind the Benghazi attack and the deaths of four Americans will come out before the general election in November. The State Department, the “Justice” [sic] Department, the White House, the DNC… indeed, every slimy tentacle of the BHO regime is desperately trying to obfuscate the truth and drive its discovery as far into the future as possible, and at minimum, beyond November 8, 2016.

What, pray tell, are they so panicked about? For the answer to that question, go back and review the questions posed on the BleachBit website: “what am I trying to hide?”; “how much harm could it do if disclosed?”; “who would try to find it?”; and “how much time and money would an investigator be wiling to spend to uncover the secret?”

The true venality and ruthless mendacity of the BHO regime and its heir apparent, HRC, might well be found in these new e-mails. And remember HRC’s callous question, ”What difference at this point does it make?” Answer:  It could well make all the difference in the world.