FOR WHOM DO THEY WORK?

According to its website, the BOPR’s function is to “aid in supervising the ethical conduct of attorneys. The Board of Professional Responsibility publishes ethics opinions, responds to informal ethics inquiries by Tennessee attorneys, hosts an annual ethics workshop for Tennessee attorneys, and regularly conducts continuing legal education seminars on various topics throughout the state. The Board also has a Consumer Assistance Program to help resolve consumer concerns which do not rise to the level of serious ethical violations.”

Roane County is one of four counties within Tennessee’s Ninth Judicial District, which has been prosecuting the case of State of Tennessee v. Roy Cook, 2013-CR-197 on an extortion charge without resolution after more than three years.

Roy Cook was recently assigned his fourth defense attorney at the county’s expense.

In April 2013, Roy Cook was accused by his twin brother, Andrew Cook, of attempting to extort him of $30,000 in return for a number of computer circuit boards which had gone missing from Andrew Cook’s apartment.

Roy Cook has denied all wrongdoing and maintained that a proper criminal investigation has never been conducted.  All three of Roy Cook’s former defense attorneys have refused to file a Motion to Dismiss.

Roy Cook has contended that if his first attorney, public defender Walter Johnson, had subpoenaed materials in a timely manner which are no longer available, the case would have been dismissed long ago.  Roy and Andrew exchanged emails through Andrew’s Yahoo! account, but after subpoenas were eventually issued for the emails by Roy Cook’s second attorney, Joshua Hedrick, Yahoo!’s legal department responded that emails are saved for only four months.

Rather than Edwards appearing before the Roane County grand jury to present the alleged evidence against Roy Cook, the task was devolved upon Andrew Cook.

A forensic analysis of Roy Cook’s three computers and cellular phone ordered seized in May 2013 by then-investigator Jeff  Vittatoe reportedly took place over a 20-month time frame in which the equipment remained in police custody, but a formal report has never been presented to Roy Cook or to either of the two judges who have presided over his case.  According to Roy Cook, the Evidence Log makes it appear that the equipment never left the evidence room. Roy Cook’s own investigation revealed that at least three law enforcement agents handled the equipment and that there was a forensic analysis done in September 2013. This was only discovered in May of this year (three years after the search warrant was served). Roy Cook subpoenaed the results of the forensic analysis from Shane Harrold, who performed the analysis, but instead of sending the results to the court clerk as required, Harrold provided it to DA Edwards in June of this year. Edwards has yet to turn it over and Harrold’s promise to fax those same results to Roy Cook has yet to be fulfilled.

The BOPR complaints were first filed electronically, then sent in hard copy by FedEx to its office in Brentwood.  On Wednesday of last week, Roy Cook received a written acknowledgement of the complaints from Beverly Sharpe, BOPR Director of Consumer Assistance. 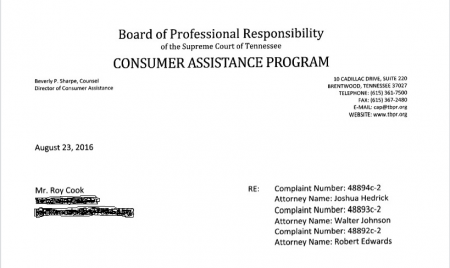 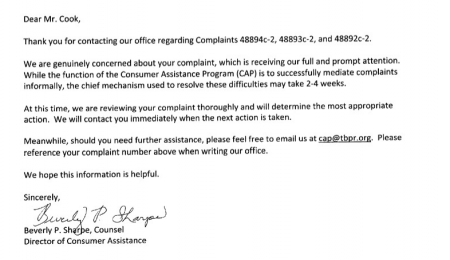 The complaints can be read here:

In an interview on Friday, Roy Cook told The Post & Email:

My complaint is unique because I filed three at the same time. You can’t separate them.  I filed against Edwards for failure to turn over evidence.  Walter Johnson and Hedrick are going to have to say, “We asked him for it; he claimed he didn’t have it.”  Otherwise, they will have to say, “We didn’t ask.”  “But Roy has emails where he said you had…”  All three can’t tell the same lie.

With Hedrick, he knew an article on the case had been published (at The Post & Email), but I never told him about you or your paper.  My complaint against him is that he violated attorney-client privilege.  He also failed to issue subpoenas.

[Editor’s Note:  In Roy Cook’s complaint about Hedrick’s conduct, an email is included in which Cook asked Hedrick why he believed Johnson was “proceeding with this prosecution,” to which Hedrick responded, “The real reason, in my estimation, and based on my discussions is that there is apparently some website writing about this case. They feel boxed in to prosecution because they believe that if they drop it now it will look like they’ve been bullied into dismissing.  They don’t want to give the impression to other defendants that they can be bullied into dismissing cases” (page 16 of 22).

In the case of Walter Johnson, he’s going to have to answer the question, “What did you do for 14 months?”  I had the evidence, and I asked him to subpoena Andrew’s Vonage logs.  He never did anything.  When I got the computers back in December 2014, I noticed the evidence log hadn’t gone out.  I said, “These things have been here for 20 months; what’s going on?”  A phone call to Lt. Dan Schneider, who was reportedly analyzing the computers, would have gotten this information.  They did nothing; they were never going to do anything.

My complaint against Edwards is that he lied to the judge, telling him that I was the reason things were being delayed.  He said that April 15 was the first time he had heard about the Vonage phone logs, but I have the email where I saw them talking about phone calls and times.

The other thing Edwards hasn’t explained is why he had the forensic analysis done in September 2013 and hasn’t turned it over.  The computers were not returned to me until 15 months later, and every time he makes that statement to the judge, he’s lying to the judge.  If he knows this, how does he know this?

The other attorneys can’t sit there and say, “We didn’t ask him about the call logs.”  They had the call logs and forensic analysis as early as September 2014.

This is not to embarrass the attorneys but rather, to shed light on the problem with the system, the problem being it’s hard to get a fair trial when you’re at the mercy of a public defender’s office that is more concerned about preserving relationships with the DA than they are about doing their job and representing the clients. This entire ordeal is nothing more than Russell Johnson attempting to intimidate me because I called him out on refusing to prosecute my wife’s former employer (HT Hackney) for perjury during an unemployment hearing, a crime that actually damages citizens of Roane County. Someone should ask him why he cares so much about a plaintiff who hasn’t lived in the U.S. for over ten years (my twin brother) but refuses to serve the citizen who elected him. He is so angry his office cannot even play by the rules. If I am so guilty then why does he have to conceal and tamper with evidence? I know the answer. It’s because the evidence that has been concealed and tampered with proves me innocent.

I challenge Russell Johnson, Robert Edwards, and Kim Nelson (the head public defender) to answer these questions. You’ve gone so long without responding to questions. Edwards has to appear before the BOPR, as do Hedrick and Walter Johnson. These three stooges work for Russell Johnson and Kim Nelson. I wonder if they’re willing to come to their defense now.

Roy spoke with Sharpe on Thursday and said that he told her, “This needs to be made public no matter what you do.”  He suggested that the BOPR “treat all three of these the same. Put them all up there and ask them all the same questions and see how many different answers you get.”

A status hearing on August 19 which Roy Cook did not attend resulted in the next hearing date set for the third week of October.