Are “Non-Affiliated” Inmates Discriminated Against at Trousdale?

REPORT: GANG MEMBERS GIVEN PREFERENCE OVER “NON-AFFILIATED” INMATES FOR JOBS

(Aug. 24, 2016) — [Editor’s Note:  The following letter was received on Monday from an inmate not heard from previously by this publication. However, it is one of dozens of letters The Post & Email has received since early May detailing problems at the Trousdale Turner Correctional Center (TTCC) in Hartsville, TN.

On Monday, Tennessee Department of Correction (TDOC) spokeswoman Neysa Taylor termed similar reports regarding the Trousdale facility “inaccurate,” stating that the department’s partnership with Corrections Corporation of America (CCA), which operates TTCC, is an effective one which provides adequately for the facility’s inmate population.

Taylor said there is a grievance procedure in place wherein any inmate can file a complaint, to which The Post & Email responded that a source informed us that grievance forms at TTCC are routinely “thrown in the trash,” according to an eyewitness.

A number of the facility’s inmates and their relatives who have visited have reported that gang members have intimidated correction officers to the point where they permit the gangs to essentially operate the prison on their own terms.

The maintaining of minimum-security inmates in a 23-hour lockdown mode for weeks at a time, a lack of regular meal and medication schedules, no employment opportunities or access to the law library, and intimidation and theft on the part of gang members have been reported repeatedly by various inmates since their transfer to the institution, which opened its doors in January.

For close to seven years, The Post & Email has exposed corruption within Tennessee’s judicial and legislative branches of state government and subsequent denial of any wrongdoing by the executive branch which perpetuates a web of dishonesty, graft, payoffs and kickbacks among so-called “public servants” compensated by the taxpayers.

In order to omit the identity of the inmate in the following letter, the first line is not included, but the relevant words directly preceding his account reads, “I’m an inmate…”

In prison terminology, “non-affiliated” or “unaffiliated” refers to an inmate who is not a member of the gang.] 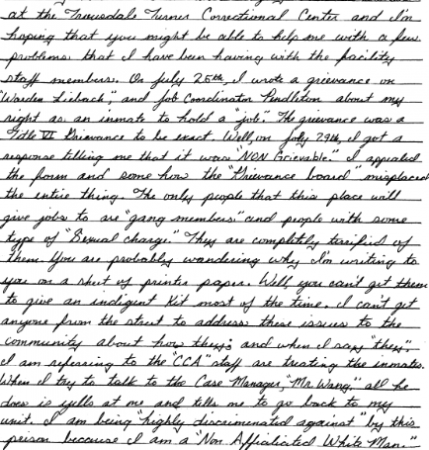 An enlargeable version of the inmate’s letter appears below (click twice on image to enlarge). 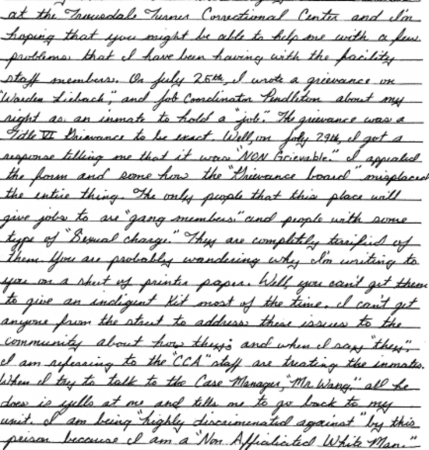 Are “Non-Affiliated” Inmates Discriminated Against at Trousdale? added on Wednesday, August 24, 2016