DOJ to Cease Contracts with Private Prison Operators, But What About the States?

AND TENNESSEE, IN PARTICULAR 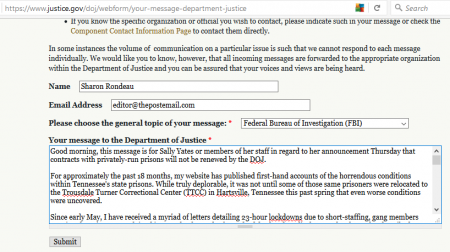 (Aug. 22, 2016) — On Thursday, Deputy Attorney Gen. Sally Q. Yates announced that the US Department of Justice would not renew contracts with private prison operators or would “substantially reduce its scope in a manner consistent with law and the overall decline of the bureau’s inmate population.”

“This is the first step in the process of reducing—and ultimately ending—our use of privately operated prisons,” Yates wrote.

The decision was based on an Inspector General’s report finding that privately-operated prisons are not safer nor more efficient than those run by the federal Bureau of Prisons (BOP).

On page 3 of the 86-page report, the inspector general’s office wrote:

We found that in a majority of the categories we examined, contract prisons incurred more safety and security incidents per capita than comparable BOP institutions. We analyzed data from the 14 contract prisons that were operational during the period of our review and from a select group of 14 BOP institutions with comparable inmate populations to evaluate how the contract prisons performed relative to the selected BOP institutions. Our analysis included data from FYs 2011 through 2014 in eight key categories: (1) contraband, (2) reports of incidents, (3) lockdowns, (4) inmate discipline, (5) telephone monitoring, (6) selected grievances, (7) urinalysis drug testing, and (8) sexual misconduct. [3] With the exception of fewer incidents of positive drug tests and sexual misconduct, the contract prisons had more incidents per capita than the BOP institutions in all of the other categories of data we examined.  For example, the contract prisons confiscated eight times as many contraband cell phones annually on average as the BOP institutions. Contract prisons also had higher rates of assaults, both by inmates on other inmates and by inmates on staff.  We note that we were unable to evaluate all of the factors that contributed to the underlying data, including the effect of inmate demographics and facility locations, as the BOP noted in response to a working draft of this report. However, consistent with our recommendation, we believe that the BOP needs to examine the reasons behind our findings more thoroughly and identify corrective actions, if necessary.

The change in federal policy does not affect privately-run prisons contracted by state governments.  Over the last several years, a number of reports have detailed lengthier incarceration times and the practice of “skimping on provisions, including food,” within privately-run prisons.

A May/June report by the Council of State Governments weighing the benefits and drawbacks of privatizing state penal institutions concluded that “the jury is still out on whether such actions are successful.”

As readers of this publication are aware, since early spring, a number of Tennessee inmates with whom we were in contact before were relocated to the Trousdale County Correctional Center (TTCC), where they observed conditions described as significantly worse than the dangerous facilities from which they had come.

Unexplained inmate deaths; short-staffing; substandard, cold food served at all hours of the day and night; lack of medical care and dispensing of prescribed medications; no employment opportunities; very limited, if any, access to the law library, which is the right of all inmates in preparing motions in their own defense; and the daily operation of the prison by gang members have been corroborated by a number of inmates, many of whom contacted The Post & Email for the first time since their relocation to TTCC.

While many “minimum-security” inmates were relocated to TTCC, the facility is designated as “medium-security” and houses the most dangerous gang members, according to inmate accounts.  Relatives of inmates have told The Post & Email that the gangs actually operate the prison.  “It’s a concentration camp,” said one relative.

“It’s a business,” we have been told of Tennessee’s private prisons.

The smuggling-in of contraband, including illicit drugs, has also been reported.

Last December, WSMV in Nashville produced a documentary covering some of the same concerns within Tennessee prisons as a whole, without specifically focusing on privately-run prisons.  The news outlet’s findings included “purging” of records relating to assaults on both staff and inmates; “introduction of contraband” by at least one correction officer; and knowledge on the part of TDOC institutions of upcoming external audits.

TTCC is owned and operated by Corrections Corporation of America (CCA), whose spokesman, Jonathan Burns, has refused to respond to The Post & Email’s requests for comment pertaining to the facility, which opened its doors in January of this year.  TTCC Warden Blair Leibach is insulated so as to be unreachable by members of the public.

On Friday, a relative of a TTCC inmate told us that in order for her loved one to make a phone call, he must ask permission of the gang which claims ownership of the prison telephone. She added that while he is on the phone, he surveys his immediate environment for safety reasons and therefore has trouble focusing on the conversation.

Some of those requesting protective custody have been told that they must wait several days, although a request for PC indicates that the inmate fears for his physical safety and life.

On Sunday night, The Post & Email received the following message from Bridget Thweatt, who has been vocal about her husband’s treatment in Tennessee CCA facilities:

The Retaliation against my husband is out of hand. I’m here to tell you it’s just not Trousdale Correction Facility, James is in South Central Correction Facility and because I brought to light their wrong doing a guard this week made the statement he mad someone high up mad they have came in tore his cell up rip the sink from the wall for it to leak and told him he better learn to swim. Then today in visit I witnessed a guard by the name of Novi shove my husband as he went through a door and called him a piece of crap my husband did nothing wrong. He told the sergeant he wanted to file grievance on him they told him sit down or our visit is terminated so he did. I ask on my way out to see captain Ronnie Enman I told him I want to fill papers out on the guard he said there was none I could fill out so I told him I’m taking it higher that if my husband would of touched the guard he would of got a assault charge so why can’t the guard be charged with assault. Some how some way CCA has to be stopped. This is another CCA that stays on lock down. They had a stabbing there this week. They are short staffed as well.
On Monday morning, The Post & Email sent the following message through the contact form at the Justice Department website:

Good morning, this message is for Sally Yates or members of her staff in regard to her announcement Thursday that contracts with privately-run prisons will not be renewed by the DOJ.

For approximately the past 18 months, my website has published first-hand accounts of the horrendous conditions within Tennessee’s state prisons. While truly deplorable, it was not until some of those same prisoners were relocated to the Trousdale Turner Correctional Center (TTCC) in Hartsville, Tennessee this past spring that even worse conditions were uncovered.

Since early May, I have received a myriad of letters detailing 23-hour lockdowns due to short-staffing, gang members running the prison, unexplained inmate deaths, and substandard food and medical care. They have also described a complete lack of work opportunities which would normally be expected in a prison environment and upon which inmates rely for a little spending money and to pay their court fees and fines.

TTCC is owned and operated by Corrections Corporation of America (CCA), whose spokesman, Jonathan Burns, refuses to respond to my multiple requests for comment about the conditions there.  However, I know for a fact that CCA personnel regularly read the articles I have published on this topic.

On Friday night, I was informed by an inmate’s relative that an inmate was killed when his throat was slashed at the beginning of this month, something which has carefully not been made public.

The relative of an inmate in another CCA prison, South Central Correctional Facility (SCCF), has informed me that her husband was shoved without provocation by a guard and threatened with the suspension of all visitors for 90 days for stating that he planned to file a grievance against the guard.  From all accounts I have received, the treatment of inmates by CCA correction officers is worse than if they were animals.

The Tennessee Department of Correction (TDOC) has refused to respond to the many inquiries and reports I have sent which come directly from inmates. I have sent copies of inmate letters to my local FBI and the Memphis FBI office, as an investigation of the practices of both CCA and the TDOC is clearly warranted.

I left you a voice message on this matter several minutes ago.

DOJ to Cease Contracts with Private Prison Operators, But What About the States? added on Monday, August 22, 2016