(Aug. 21, 2016) — In what appears to be a surprising turn of events since Saturday night, the Yahoo! main news page contains an editorial just under the “Politics” heading by Michael Goodwin of The New York Post which scathingly calls out the mainstream media for its bias toward Democrat presidential nominee Hillary Clinton over Republican nominee Donald Trump.

Below Goodwin’s piece are several articles about Trump with neutral headlines.

On Saturday evening, this writer published an article noting that at that time, the story appearing just below the featured article at Yahoo! News was a U.S. News & World Report recycling of news from August 2 about Trump’s then-withholding of political endorsements of New Hampshire Sen. Kelly Ayotte, Arizona Sen. John McCain, and Wisconsin Rep. and Speaker of the House Paul Ryan.

Several days later, Trump did, in fact, proffer endorsements of all three.  Ryan won his primary on August 9, while Ayotte will be challenged by primary candidate Jim Rubens on September 13.  On August 30, McCain will face a primary challenge from Dr. Kelli Ward, a former Arizona state senator.

In performing an internet search for Ayotte’s possible primary date on Sunday morning, however, the USN&WR article dated August 2 appeared at the top of the results and at this link. 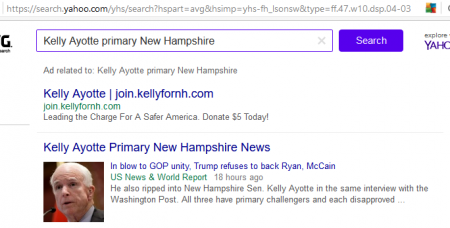 On Saturday night, the recycled article occupied the same position at Yahoo! News in which Goodwin’s editorial now appears.

While this publication seldom links to The New York Post because of its at-times adult graphical content, it notes that Goodwin, a former New York Times writer, declares in his piece that all semblance of objectivity relative to the 2016 presidential race has been cast aside by not only the former “paper of record,’ The New York Times; but also, by other media giants ABC News, NBC News, and CBS.

In his opening paragraphs, Goodwin wrote:

Donald Trump may or may not fix his campaign, and Hillary Clinton may or may not become the first female president. But something else happening before our eyes is almost as important: the complete collapse of American journalism as we know it.

The frenzy to bury Trump is not limited to the Clinton campaign and the Obama White House. They are working hand-in-hand with what was considered the cream of the nation’s news organizations.

The shameful display of naked partisanship by the elite media is unlike anything seen in modern America.

Throughout the campaign cycle, which began in early 2015, a number of The New York Post’s writers have expressed staunch disapproval of Trump in regular editorials, tweets and on-air commentary.

Goodwin goes on to say that when he wrote for The New York Times, the editors of the Opinion and News columns were different people and that “reporters’ political views” were not published.  “Those days are gone,” he now asserts.

Goodwin’s claim that the American major media are openly promoting Clinton is supported by statements made by former Guardian reporter Glenn Greenwald in an interview with Slate subtitled, “And in their rush to condemn Trump, are journalists betraying their values? Glenn Greenwald says yes to both.”

In the interview, Greenwald, who lives in Brazil and broke the news about the NSA’s spying capabilities as reported by Edward Snowden, stated that although he, too, opposes Trump politically, “The U.S. media is essentially 100 percent united, vehemently, against Trump, and preventing him from being elected president…But that doesn’t mean that as a journalist, or even just as a citizen, that I am willing to go along with any claim, no matter how fact-free, no matter how irrational, no matter how dangerous it could be, in order to bring Trump down.”

Goodwin went further by writing, “Any reporter who agrees with Clinton about Trump has no business covering either candidate.”

Interestingly, below Goodwin’s article is one by The Huffington Post titled, “Donald Trump is Going to Be Elected.”  “TV and entertainment now dictate everything political. It is a never-ending show,” wrote author Michael Rosenblum.  “Who gets better ratings?…He is Kim Kardashian. She (Hillary Clinton) is Judy Woodruff.  Who would you rather watch for the next four years?”

The Post & Email notes that as would be expected, USN&WR has updated its home page on Sunday, albeit with an arguably different tone from last night.

Our question sent to USN&WR as to why it recycled an old story has not received a response as of press time.

Update, 11:24 a.m. EDT:  Yahoo! News has updated its page to feature an article at the top about North and South Korea, below which now appears an article in the “Politics” section titled, “Donald Trump’s Support for Forced Deportation Is ‘To Be Determined.'”

Editorial Claiming Media Bias in Favor of Clinton Featured at Top of Yahoo! News on Sunday added on Sunday, August 21, 2016

4 Responses to "Editorial Claiming Media Bias in Favor of Clinton Featured at Top of Yahoo! News on Sunday"