“NEVER BEEN HEARD BY THE AMERICAN PEOPLE” 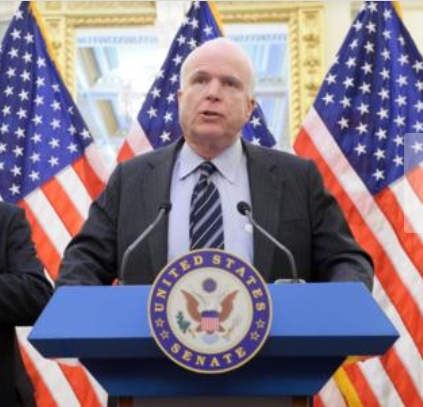 In 1975, South Vietnam, which the U.S. had been defending against communism, fell to the northern forces, and the U.S. began the withdrawal of troops under President Gerald R. Ford.  The unified communist country is now known simply as “Vietnam.”

On Thursday, TruNews reported, “The 1969 North Vietnamese radio broadcast has never been heard in the United States of America. In fact, there has never been any knowledge that such a recording existed. The audio recording was found in a misplaced file in the National Archives in Washington, D.C. The broadcast was recorded by the Foreign Broadcast Information Service, a branch of the CIA that monitored international shortwave and foreign radio broadcasts.”

At 13:00 in his broadcast that day, TruNews host Rick Wiles began the segment with McCain’s biography, then revealed the existence and obtaining of the recording in which McCain allegedly expressed “deep gratitude” to the North Vietnamese “for caring for him” after his Navy plane was shot down on October 26, 1967.

McCain was reportedly a prisoner of the North Vietnamese for five and one-half years and has been said to have received regular beatings and other torture while in captivity.

What is alleged to be McCain’s voice in the recording begins at 17:45.

GotNews also has a feature story about the recording, which Johnson said was found at the National Archives, although mislabeled.  “I had known that this audio was out there,” Johnson told Wiles.

Wiles told his audience that over the years, he has received many communications from Vietnam veterans who said that McCain was not the “war hero” he has been made out to be.  Wiles likened the alleged McCain recording to “Tokyo Rose,” who was American-born but was “stranded” in Japan following that country’s attack on Pearl Harbor, HI on December 7, 1941.  Tokyo Rose, whose birth name was Iva Toguri, remained in Japan and agreed to operate an anti-American radio program, possibly with other female broadcasters.

At the conclusion of World War II, Tokyo Rose was returned to the U.S., tried and convicted of treason, serving six years in prison.  In 1976, President Gerald R. Ford pardoned her.

Earlier in the 2016 presidential campaign cycle, Republican presidential candidate Donald J. Trump was excoriated for having criticized “war hero” McCain, about whom Trump had said, “I like people who weren’t captured.”

Johnson stressed that McCain has used his Vietnam service and captivity to advance his political career, which began in the U.S. House of Representatives in 1982 and now includes four terms in the U.S. Senate.  He is seeking a fifth term this year and is facing a competitive challenger, Dr. Kelli Ward, in a primary on August 30, the day after he turns 80 years old.

A Gold Star father who spoke at the Democratic National Convention last month, Khizr Khan, told CNN in a follow-up interview that his son, who was killed by a car bomb on June 8, 2004 serving in the Army in Iraq, considered McCain “his hero.”  Trump has been the object of incessant attack from the mainstream media and Khan since Khan gave his speech on July 28, subsequently reporting that Trump might withdraw from the race, that “an intervention” was planned to refocus Trump in what is now a general election contest with Hillary Clinton, and that major GOP figures continue to reject him.

CNN’s objectivity has been called into serious question as it has characterized Trump’s Twitter responses to Khan’s numerous interviews in which Khan has disparaged Trump’s character as “attacks” on Trump’s part.

McCain defended Khan against Trump’s remarks by stating, “I cannot emphasize enough how deeply I disagree with Mr. Trump’s statement. I hope Americans understand that the remarks do not represent the views of our Republican Party, its officers, or candidates. In the end, I am morally bound to speak only to the things that command my allegiance, and to which I have dedicated my life’s work: the Republican party, and more importantly, the United States of America. I will not refrain from doing my utmost by those lights simply because it may benefit others with whom I disagree.”

At 28:38, Johnson told Wiles that McCain has worked in the Senate to “seal” POW records, “including his own.”  McCain currently serves as chairman of the Senate Armed Services Committee.

In 2008, many Americans questioned McCain’s presidential run on the grounds that he is not a “natural born Citizen,” as is required for the president in Article II, Section 1, clause 5 of the U.S. Constitution.  That year, he ran against Barack Hussein Obama, whose past and birthplace are unknown given that Obama’s long-form birth certificate and Selective Service registration form have been found by a criminal investigation to be forgeries.

During the campaign, McCain would not tolerate criticism of Obama, the mention of Obama’s middle name, or speculation that Obama is a Muslim, not a Christian.

McCain was born in Panama to two U.S.-citizen parents on August 29, 1936, a fact he acknowledged in the propaganda recording if it is authentic.

Johnson opined that over his congressional career, McCain “has been on the wrong side” in America’s conflicts around the world.

Toward the end of the radio show, Wiles and Johnson speculated as to whether or not the mainstream media will cover the story.

At 48:15, Johnson cited that certain McCain donors include Paul Singer, “who’s backing up Paul Ryan,” the Speaker of the House whose Republican primary is Tuesday against political newcomer Paul F. Nehlen III.

One Response to "Report: John McCain Made Communist Propaganda Recording Broadcast in 1969"