SUBSEQUENT CALLS TO TAKE PLACE EVERY OTHER THURSDAY, OPEN TO THE PUBLIC 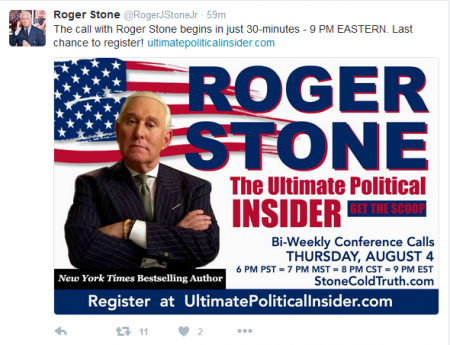 (Aug. 6, 2016) — On Thursday night, longtime political adviser and author Roger Stone was a guest on a new biweekly conference call titled “The Ultimate Political Insider” to be held biweekly at 9:00 p.m. EDT.

The calls are open to the public.  Anyone wishing to register may do so at the link sent out by Stone on Twitter prior to the call.

The host was Jason Sullivan, who introduced Stone as the “single man behind the scenes trying to get Donald Trump to run for the past 28 years.”

Stone’s websites are “stonezone.com” and “stonecoldtruth.com.” Stone often tweets vintage photos of Trump and himself from the 1980s and 1990s as well as photos of men’s fashion statements, an area in which Stone has developed a reputation as a trend-setter.

He has written books about the Bush family, the Clintons, Richard Nixon and the assassination of JFK.

After Stone was introduced by Sullivan, he criticized the mainstream media for excoriating Trump over every perceived misstep and statement of last week while at the same time, “we learn that Hillary Clinton sold Apache helicopters and weapons to ISIS and that she lies about it.”

Stone described the revelation that the IRS is probing the Clinton Foundation as “the thread that will unravel the entire coat” and the foundation itself as “the largest money-laundering scheme in U.S. criminal history.”  “It is rife with corruption,” he said, stating that “the Russians, the Saudis, the Chinese” have contributed to the foundation “in return for governmental favors.”

Stone said that Julian Assange, founder of the government transparency website Wikileaks, will be releasing more emails damaging to the Clinton presidential campaign.

At approximately six minutes into the call, Sullivan asked Stone if it were true that if elected, Trump will forego the $400,000/year presidential salary, which Stone said Trump plans to “return to the government.”

Stone revealed that he first wanted Trump to run in the primary against George H.W. Bush in 1988, who Stone did not think was the best candidate.  He also wanted Trump to run in 2000 and in 2012.  Stone speculated that 2012 “was not the right time” for Trump to run because of his business holdings but that now, his children are capable of running the day-to-day operations of the Trump companies.

Both Sullivan and Stone ruminated that Trump has made sacrifices to run and will continue to do so if elected given the enormous fortune he has amassed as a constructor of large hotels, golf courses and resorts around the world.

“He doesn’t like seeing what’s happening to America,” Stone said of Trump’s reasons for running now. “To me, Donald Trump is a rejection of 30 years of the joint policies of the – I hate to say this – the Republicans and the Democrats, the Bushes and the Clintons – that have gotten us where we are.”

Stone then cited that current situation as “endless war, massive borrowing and debt, erosion of our civil liberties, a weak military that can’t fight abroad if they have to, a foreign policy that is beyond ‘neocon’ where we go around the world looking for trouble…”

Stone decried the 1994 “Three Strikes and You’re Out” crime bill signed by then-President Bill Clinton which Stone said was Clinton’s attempt to bolster the re-election of congressional Democrats in elections that year.  Clinton has said he now regrets signing the measure.

Sullivan asked if “there was any truth to rumors that Trump is quitting the race,” which Stone said is false and had its origins with Republican Party senior operatives.

Stone said that Khizr Khan, the Gold Star father who stridently called upon Trump to read the U.S. Constitution and abandon his plan to more carefully screen Middle Eastern “refugees” on the last night of the DNC convention, “kind-of used his son’s tragic death as a shield” by “waving the Constitution and saying Trump hasn’t read it.”  As has been reported by Breitbart, The Washington Examiner and other sources, Stone said that Khan has “written extensively” about Sharia law as being superior to the U.S. Constitution and that the two systems of governance are incompatible.

Trump was excoriated by major media outlets virtually incessantly following his Twitter responses to Khan and condemned by Sen. John McCain, his daughter Meghan and other political operatives on both sides of the aisle.  Republicans and CNN, in particular, claimed that Trump had gone “off-message.”

Meghan McCain has previously made it clear that she will not vote for Trump.

Stone rejoined that Trump’s desire to possibly ban Muslims from certain countries from coming to the U.S. is constitutional and characterized Khan’s remarks as “a political hit job.” Khan has gone on to conduct numerous interviews with the media in which he said that Trump has “a black soul” and does not listen to the voters.  An interview with Pakistani media revealed Khan claiming that “Allah” is directing Trump to “make mistakes.”

“Trump is a fighter; Trump is a brawler; there are going to be many, many turns in the road…” Stone said in response to a question posed by Sullivan as to whether or not the Khan matter had doomed Trump’s campaign.

Another question asked whether or not a Trump campaign “upheaval” is imminent as has been rumored, which Stone said was false. Stone did, however, describe RNC chairman Reince Preibus as “apoplectic” at Trump’s lack of endorsement of Rep. Paul Ryan and other Republicans running for re-election.  On Friday evening, Trump formally endorsed Ryan, New Hampshire Sen. Kelly Ayotte, and Arizona Sen. John McCain, all of whom are facing primary challenges in the near future.

Stone questioned why Preibus has been retained as RNC chairman when presidential races have been lost twice in a row to Barack Obama.

Also on Friday, Stone published an article at Breitbart in which he called out the media for failing to report about the “latest email scandal” which broke just before the Democratic National Convention.  In his piece, Stone detailed that hacker “Guccifer 2.0” self-reported having hacked the DNC’s servers and handed over thousands of emails to Wikileaks which demonstrated that party operatives had favored Clinton over Vermont Sen. Bernie Sanders during the primaries and sought ways to publicly discredit his campaign.

Stone said he believes that the remaining days of the 2016 presidential campaign are likely to be affected by “big-picture” issues and incidents yet to occur.

Sullivan went on to say that several callers had asked if Hillary Clinton will “steal the election.”

When Sullivan read the question, “What is the biggest challenge Mr. Trump faces?” Stone responded that there are two, the first of which he said is the “incredible media bias.”

In regard to Trump’s views on the admission of Middle Easterners, Stone said that the threat of Islamic terror in America is real, and “to not screen or vet in a better way, to not be allowed to look at the social media postings of someone who wants to come here to see if they’re calling for death to gays….that’s stupid.  Donald Trump would put together a system that would allow us to vet people.”

Stone identified other recent rumors that Trump is “dropping out,” that “an intervention” is being planned to change Trump’s public presentation, and that Trump campaign manager Paul Manafort is being replaced with strategist Ed Rollins as “false.”

Regarding Clinton, Stone said he believes that her campaign is “overconfident” that she will win in November.

“His second-largest challenge is the fact that they are prepared to steal this,” Stone said, referring to the earlier question and citing the ease with which Diebold and other voting machines reportedly can be pre-programmed.

Sullivan responded that “the majority” of questions submitted by listeners focused on the election being “stolen.”  He asked Stone if volunteers could be trained to”be vigilant” to avoid “shenanigans” on Election Day.

“The machines are going to try to vote illegals,” Stone replied, stating that illegal aliens are “already allowed” to cast a vote in New York City and San Francisco’s municipal elections.  “The single most important thing that can be done is to register one million approximately new voters who are Trump voters in the ten swing states,” he said.

Stone said that he arrived at that figure by compiling the number of votes by which Mitt Romney lost in 2012 in 11 swing states and doubling it.  “That has to be done by October 6.  I’m involved with the Committee to Restore America’s Greatness. You can find them at RestoreAmericasGreatness.org, and we are actively raising money through a Super PAC that does no communications, no TV spots, no radio spots, but works solely on the concept of raising one million against voter theft,” Stone said.  “You have to win so big that they can’t steal it, that it would be too obvious.”

In response to the question Sullivan presented about volunteers, Stone said that volunteers are definitely needed “and if the Trump campaign doesn’t have it, we’re going to have to build it.”

He described the attempt to combat voter fraud as “a monumental task” but one that needs to be accomplished.  Sullivan said that people wishing to volunteer or make a financial donation to the effort can do so at RestoreAmericasGreatness.org.

Sullivan then spoke about a video posted at Infowars.com of a voting-machine analyst who explained that the results can be easily changed to reflect “the opposite” of how people actually voted.  Stone responded that voting machines are generally under the purview of the 50 Secretaries of State, some of whom are political activists. When Sullivan asked if that is “legal,” Stone replied that he believes it is legal but “disturbing, to say the least.”

Toward the end of the call, Sullivan confirmed that subsequent calls will be held every other Thursday at 9:00 p.m. ET/6:00 p.m. PT.

Regarding the national debt, Stone called out the “Republican Party establishment” as being “part of the problem” with out-of-control spending which has ballooned into trillions in national debt.  “Donald Trump is clearly the reform candidate,” he said.

Sullivan proffered a question from a listener asking if proof could be obtained to determine whether or not a “Danney Williams” is the biological son of Bill Clinton.  Stone said he has met Williams, who he described as a “30-year-old, abandoned son of Bill Clinton and Bobbie Ann Williams,” an alleged prostitute.  “I had to go see him for myself to find out whether this is true,” Stone continued.  He looks and sounds exactly like his father; he’s very bright; he’s very hardworking; he has five kids of his own; he works two jobs to make ends meet even though his father is worth several hundred million dollars.”

Stone said he included Danney Williams in his book about the Clintons and that Bill Clinton “sent Christmas presents” to Danney for five years “and told him specifically, ‘Don’t tell Hillary.'”

Stone is convinced that Bill Clinton is Danney Williams’s father.

Stone claimed that the Clintons have “bullied” the media into refraining from making public Bill Clinton’s scores of alleged assaults on women, a number of whom are not well-known such as Paula Jones, Kathleen Willey and Juanita Broaddrick.

The Post & Email was not able to find on Hillary Clinton’s campaign website or Twitter feed that any of her surrogates are holding conference calls, but should they be announced, we will register and participate as with Stone’s invitation.  The Post & Email follows both nominees on Twitter.