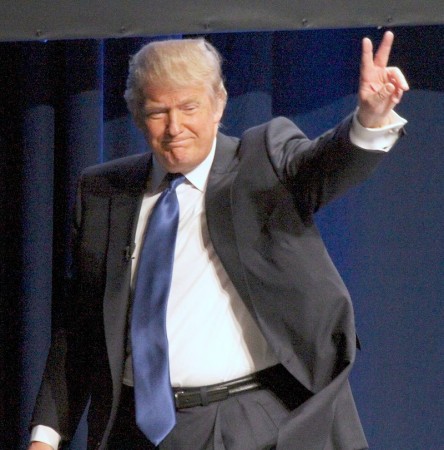 (Aug. 5, 2016) — The presidential race has now become Donald Trump versus the world. The outsider businessman is facing a vast array of opponents that is unprecedented in American politics. The attacks against Trump have worked perfectly to assist Hillary Clinton, his ethically challenged opponent. She refuses to hold news conferences or answer truthfully about her email scandal, foundation fundraising or Benghazi, but is now leading by a comfortable margin.

It will only get worse for Trump over the next three months. While he overcame unfair media treatment in the primaries and dispatched the party establishment and 16 entrenched candidates to win the nomination, the level of resistance he will face in the general election will be much greater. This tsunami of opposition will be designed to deny Trump the White House.

Of course, Trump must deal with Hillary Clinton and her corrupt political machine. This is the same campaign that used DNC Chairwoman Debbie Wasserman Schultz to rig the nomination process and thwart the chances of insurgent candidate Bernie Sanders. As the WikiLeaks email disclosures proved, Clinton was guaranteed the nomination no matter how well Sanders did.

In the general election, Clinton will attempt to derail Trump, a political newcomer, by taking advantage of her usual dirty tricks and decades of political experience. She will also have the complete loyalty and support of the mainstream news media. Every day, Clinton is given a steady stream of positive media coverage, while Trump is constantly savaged. The latest analysis from the Media Research Center shows the mainstream news media gave the Democratic National Convention more attention and much more positive coverage than the Republican National Convention.

In the last few days, the media has been going crazy giving non-stop positive coverage to Khizr Khan, who lost a son in the Iraq War. Khan and his wife were featured at the Democratic National Convention and have been giving interviews responding to the supposed “attacks” from Donald Trump. In fact, the only “attack” from Trump was a question about whether Mrs. Khan, a Muslim, was allowed to speak at the convention. It is indisputable that women are treated as second-class citizens in many Muslim nations, but this painful reality has been ignored by the media in their obsession to condemn Trump.

While Mr. and Mrs. Khan have been given tremendous attention, Pat Smith, the mother of Sean Smith, who was killed in Benghazi, has been practically ignored by the media. She has been speaking out for almost four years, blaming her son’s death on the inaction of then-Secretary of State Hillary Clinton. Ms. Smith also claims that Clinton attributed her son’s death to an Internet video, thus lying to her about why Sean Smith was killed. Even though she is both compelling and genuine, Ms. Smith has been rarely, if ever, given an opportunity to tell her important story. According to the Media Research Center, the Khans received 50 times more media coverage from the major broadcast networks than Ms. Smith after her speech at the Republican National Convention. This is just another indication that media bias is real and a very useful tool for Hillary Clinton in her campaign against Trump.

The Donald also has to deal with the usual array of special interest groups, from unions to Hollywood stars, who always support the Democrat Party. However, in this election, Trump faces internal opposition that most Republican nominees do not have to face. Trump is opposed by the Republican Party establishment, represented by commentators such as Bill Kristol and politicians such as the Bush family and Mitt Romney. Trump also is opposed by wealthy donors like the Koch brothers, who refuse to support him in this election, in effect, providing a major assist to Hillary Clinton.

There are also the “Never Trump” Republicans, such as Senator Ted Cruz and his conservative purist supporters, who somehow believe that the nation can survive four years of Hillary Clinton and another GOP nominee can save the country in 2020. Unfortunately, after several Clinton Supreme Court nominations, it will be too late for America in 2020. The inescapable truth is that this election is our last chance to save the country.

Finally, Trump is taking on the globalists and the foreign interests who have benefited from decades of support from our country. Trump believes in “America First” and this is a direct threat to many foreign leaders who do not want to pay for their own defense costs and who profit by taking jobs from Americans and selling cheap exports to our country. This week in a news conference Barack Obama expressed the globalist view perfectly when he labeled Trump as someone who “doesn’t have the judgment, the temperament, the understanding to occupy the most powerful position in the world.”

Of course, Barack Obama was elected President after serving less than one term as U.S. Senator and had no experience on the world stage. Obama was a community organizer for years, not an ideal training ground for the presidency. In contrast, Trump has been an international businessman and has spent decades building a worldwide empire. His lack of experience as a politician is exactly why so many people are attracted to his campaign.

In the remainder of the campaign, the unrelenting attacks from all sides will continue. If Trump is going to prevail, he must go over the heads of his many critics and directly address the American people on the vital issues which are at stake in this election. He needs to continue to emphasize safety, jobs, law and order, secure borders and his “America First” agenda.

If he can cut through the noise and focus on this agenda, he can win, but he must not get sidetracked by his innumerable opponents who want to talk about everything but the real issues that are impacting millions of Americans.

Jeff Crouere is a native of New Orleans, LA and he is the host of a Louisiana based program, “Ringside Politics,” which airs at 7:30 p.m. Fri. and 10:00 p.m. Sun. on WLAE-TV 32, a PBS station, and 7 till 11 a.m. weekdays on WGSO 990 AM in New Orleans and the Northshore. For more information, visit his website at www.ringsidepolitics.com. E-mail him at jeff@ringsidepolitics.com.

One Response to "Trump vs. the World"