INVESTIGATION THAT STARTED WITH A TIP FROM DARIEN POLICE RESULTS IN THE ARRESTS OF THREE MEN, INCLUDING MID-LEVEL DRUG DEALER FROM BRIDGEPORT

(Aug. 4, 2016) — Bridgeport – Bridgeport Police today announced that an operation conducted by the Narcotics Division and the Violent Crime Reduction Task Force, in conjunction with the Darien Police Department,  has resulted in the arrests of three men including a significant drug dealer in Bridgeport who is believed to have run a heroin and marijuana ring out of Bridgeport’s Black Rock neighborhood.  The Bridgeport Police Narcotics Task Force working tandem with the Darien Police Department, conducted a long term drug investigation into a large scale heroin trafficker, later identified as Joel Jean, born 08/30/86. Investigations revealed that Joel Jean, while free on Parole, has been distributing large quantities of heroin throughout the city of Bridgeport and lower Fairfield County.   As a result of the investigation, search and seizure warrants were gained for Jean’s residence, located at 127 Hansen Avenue, Bridgeport Connecticut, and for his vehicle; a 2004 Honda Accord, which police witnessed Jean used to transport heroin. Lastly, an arrest warrant was obtained for Joel Jean charging him with a substantiated count of sale of narcotics.

“This significant action by the Bridgeport Police underscores the point that we will proactively pursue those who sell poisonous illicit drugs in our city and use illegal weapons to harm our residents,” said Bridgeport Mayor Joe Ganim.  “In this case our police officers got key cooperation from the Darien Police Department and this dealer was selling these dangerous substances while on parole to customers all over Fairfield County.  This behavior will not be tolerated in Black Rock or any neighborhood in Bridgeport and we will continue to work very hard to crack down hard on anyone who endangers our residents.  These actions make Bridgeport’s streets safer.”

On August 3, 2016, members of the Bridgeport Police Narcotics Division and Darien Police Department apprehended Joel Jean and his cohort, Scott Similient, during a motor vehicle stop. Shortly after the pair were taken into custody, authorities executed the search and seizure warrant on Jean’s residence, which resulted in the seizure of  approximately 400 bags of heroin, 2 pounds of marijuana, scales, drug packaging materials, a pump action 12-gage shotgun, two loaded semi automatic pistols, assorted ammunition and over $3,000 in cash from drug proceeds. 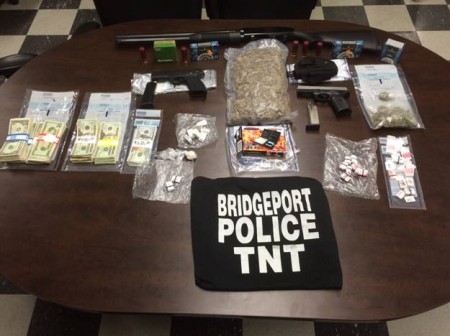 During the search of the residence a male, later identified as Jamel Jacobs, arrived on scene. It was determined shortly thereafter that he also resided at the address. Police later located a firearm in his vehicle.  Jacobs had a valid pistol permit; however, after he provided a combination to the safe located inside the residence, which was opened by police and found to contain two pounds of marijuana, he too was placed under arrest.

Joel Jean was charged with Criminal Attempt at Sale of Narcotics, Possession of Marijuana With Intent To Sell, Possession of Narcotics With Intent To Sell and Operating a Drug Factory. Jean was charged separately with the arrest warrant for one count of Sale of Narcotics, that was attached with a court set bond of $250,000. Due to his status of being on Parole (supervised release from prison), Joel Jean will be remanded back into custody.