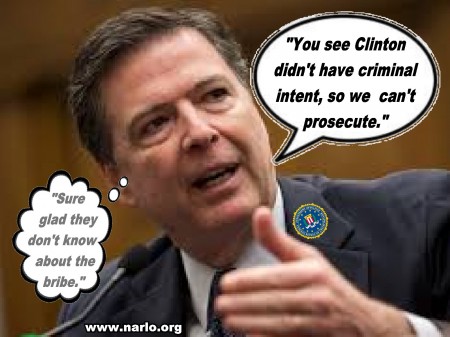 Was Comey bought off?  We don’t know.  But, ladies and gentlemen, it smells so bad as to remove all doubt that a “deal” was made at the highest level of government to save Hillary Clinton’s presidential bid.  That is tyranny and corruption by any definition.  Whatever respect we had for James Comey was dashed by his obviously political decision.  He sacrificed honor for political expediency.

We ask you to view a nine-minute video in an under-oath exchange between U.S. Representative Jason Chaffetz and FBI Director James Comey about Hillary Clinton’s actions as Secretary of State with regard to her treatment of classified material.  It will give you an idea of just how bad it smells and that it was no coincidence that the FBI and the DOJ let her off.  Trump is right.  The system is rigged and not in the little guy’s favor, especially if the little guy finds him- or herself in the sights of a federal bureaucracy like the IRS, or the EPA, or the BLM, or the USFW, or OSHA, or the USDA, or DHS, or the FBI.

The IRS doesn’t need for you to have criminal intent to be hounded, harassed, intimidated, or prosecuted by this rogue, out-of-control bureaucracy that has no master.  All you have to do is to run afoul of the IRS’s interpretation of Title 26 of the United States Code (USC).  Depending on the agent and the office location, their interpretation of Title 26 can be whatever they want it to be.  You have two choices:  comply or fight.  Fighting can be an exhausting, time-consuming, expensive and a highly emotional experience.   Most taxpayers just capitulate to the almighty Goliath.

As we stated before in another article, the IRS hounds over 10,000,000 taxpayers every year for IRS mistakes.  As we write this, we are in the sights of the IRS for one of their mistakes.  That fight has been going on since November of last year.  And that is only one of the fights we have had with the IRS that extends over 10 years.  They are relentless.  They pay no attention to your claims of innocence and ignore your legal defenses.  They violate your right to due process and they trample all over your constitutional rights.  They use threats of huge fines, penalties and even jail time if you resist.  In the criminal world, their actions amount to coercion, extortion and blackmail.  Congress won’t rein them in and they are free to operate as a shadow, ruthless government, with virtually unlimited power.

The IRS has gone after any conservative group who dares to ask for tax-exempt status.  Their persecution of these groups was fodder for a giant scandal that ended in an FBI investigation.  But like the Hillary Clinton FBI investigation, the FBI let the IRS off the hook.  Once might be a coincidence, but twice it is collusion at the highest level and therefore an illegal conspiracy.

And God help you if the EPA comes along and charges you with a violation of the “Clean Water Act.”   One Wyoming rancher was attacked by the EPA for creating some irrigation and stock watering ponds on his property, with full permits from the state.  That wasn’t good enough for the EPA.  They hit the rancher with a fine of $37,500 per day for a Clean Water Act violation.  As the fines mounted to almost $20,000,000 he had to take the case to the U.S. Supreme Court to beat back their attack.  He prevailed, with the help of the Pacific Legal Foundation which defended him at the high court.  He got the fines lifted and the violation rescinded but he received nothing for his lost time, money and emotional distress.  But how many ranchers and farmers have the resources to fight the federal government?  While at the same time, presidential candidate Hillary Clinton is free as a bird for multiple federal law violations.

The Endangered Species Act (ESA) is another federal law overseen by the U.S. Fish and Wildlife Service with drastic consequences for landowners.  Tens of thousands of rural landowners, mostly west of the Mississippi, have become the target of radical environmental groups that sue the government over whether an animal or plant species should be listed as threatened or endangered.  God help you if your land is the habitat for one of these species.  On the backs of the taxpayer these environmental groups and their attorneys receive huge settlements from the government, allowing them to continue their lawsuits to preserve species that should have been de-listed based on fraudulent science.  The ESA has become a cash cow for environmental groups and their attorneys while devastating rural landowners who lose the right of use of their land because of a threatened or endangered species.  The landowners lose, but Hillary and others like her win.

Legitimate businesses are also targets of federal bureaucracies.  Federal agents raided Gibson Guitars over some woods they were using in the manufacturing process.  The government claimed the woods were banned.  The charge had no merit in law.  That raid cost Gibson several million dollars in fines, penalties and lost business.  Gibson Guitars was a non-union company and the owner had donated fairly large sums to Republican candidates.  Meanwhile, Hillary Clinton gets a free pass.

Dairy farmers have been raided by federal agencies for daring to exchange their un-pasteurized milk with willing buyers.   Thousands of farmers are having their irrigation water cut off for a stupid two-inch fish.  But Hillary can break the law with impunity and receives no punishment and is in fact rewarded for her criminal behavior.  She could become the next president of the United States.

Illegal aliens flood into America by the millions, breaking our laws.  Very little is done to stop the flood and many American cities are openly shielding them.  Illegal aliens get rewarded for their law-breaking with our tax dollars and Democrats continue to promise them amnesty through proposed immigration reform legislation.  The federal government gives sanctuary cities a pass while these cities openly defy federal law.  But Hillary can’t be prosecuted because she didn’t have criminal intent.

The Black Lives Matter (BLM) movement perpetrates violent protests all over America for an injustice that doesn’t exist.  They are funded with millions of dollars from rich liberal businessmen and Hollywood actors.  Very few of the BLM lawbreakers are prosecuted for their criminal activities.  Obama and Hillary have endorsed and promoted this violent group, as they did the Wall Street protests.

There are federally-perpetrated injustices on private citizens every day, day in and day out.  Americans are being prosecuted for the smallest infractions, paying big penalties and sometimes jail time.  But powerful, politically influential and wealthy individuals receive scant interest by prosecutors who are sworn to uphold the law.

After over 10 years of writing a weekly column about the decline of America into ruling-class chaos, where the politically-anointed are shielded by the system from misdeeds and criminality, we stand aghast at the docility of the American people to accept this as “just the way it is.”  That’s how dictatorships are born.

Millions of Americans naively believe that they can change the system with their votes.  They further erroneously believe that one man can do the job for them.  But that only works if the believers have the majority.  To those who continue to exist in the Land of Oz and other wizards, the Democrats have the votes because they have been successful in the last 100 years buying off the majority of the American people with promises from the public treasury.  This Democrat policy of buying votes had nothing to do with compassion and everything to do with maintaining perpetual political power.  If all of the people who could vote did vote, America would just be another European socialist country going broke.  But the fact is, ladies and gentlemen, America IS just another European socialist country going broke because the American people continue to let the government buy off the low-information voter with the people’s money and give sanctuary and a free pass to the ruling class, like Hillary Clinton, that are above the law.

That is why this rogue, out-of-control bureaucracy called the IRS that has no master doesn’t need criminal intent to hound, harass, intimidate and prosecute American citizens but shield and actually work for those in power.   The axiom that says Americans are innocent until proven guilty under the law does not apply at the IRS and probably doesn’t apply in the American court system if the truth be known.

What’s the solution?  To those who have an ounce of intellect, the solution is abundantly obvious but comes with high risks, huge costs and a monumental mind shift in the body politic.  Sadly, we will never live long enough to see this shift, if it ever happens.

If you don’t AGREE, let us hear from you.