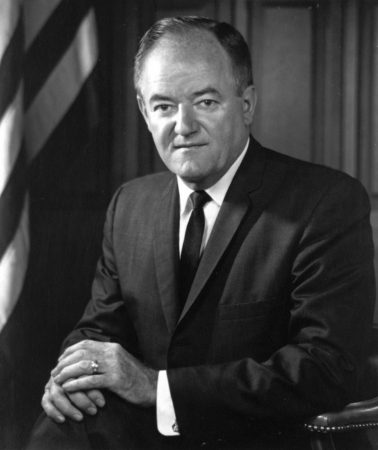 (Jul. 31, 2016) — On August 29, 1968, Democrat presidential nominee Hubert H. Humphrey gave his acceptance speech at the quadrennial party convention in Chicago, IL in which he praised the policies of his would-be predecessors, Lyndon B. Johnson, Franklin Delano Roosevelt, Harry S. Truman, and John. F. Kennedy, the latter of whom famously said, “Ask not what your country can do for you, but what can you do for your country.”

Humphrey had served as vice president during Johnson’s full term from 1965 to 1969 and expressed a desire to end the Vietnam War, which saw violent protests, “conscientious objectors” and draft-dodgers defecting to Canada until the war ended in 1975.

Humphrey was born in South Dakota in 1911 and became a pharmacist by profession.  He settled in Minnesota after attending the University of Minnesota for his bachelor’s degree and the University of Louisiana for his master’s degree in political science, a subject he taught during World War II by means of a program established by FDR, the Works Progress Administration (WPA).

Humphrey was a founding member of the Minnesota DFL (Democratic-Farmer-Labor) Party, which was a merger involving Minnesota Democrats and the Farmer-Labor Party.

Today, the DFL believes in “social justice,” environmental issues, and strengthening the party’s representation both locally and in the U.S. Congress.

Humphrey served as mayor of Minneapolis from 1945 to 1949, where he developed a reputation for toughness on crime.  He was elected to five terms in the U.S. Senate beginning in November 1948, serving three complete terms. His third term was interrupted when he agreed to run as Johnson’s vice president.

Humphrey died in 1978, less than one year after he was seated for his fifth and last Senate term.

In 1968, Eugene McCarthy and Robert F. Kennedy were Democrat presidential primary contenders against Johnson, but Johnson’s withdrawal following the New Hampshire primary and Kennedy’s assassination following his winning of the California primary yielded Humphrey as the eventual nominee.

As The Post & Email reported, the Democrat National Convention (DNC), held in Philadelphia from July 25-28, featured speakers promoting the issues of LGBTQ “rights;” gun-control legislation in the wake of domestic shootings, some of which were perpetrated by Islamic terrorists; “social justice;” equal pay for women; public education; the environment; “Mothers of the Movement,” and “love” for others, which Humphrey also invoked in 1968 by quoting the prayer of St. Francis of Assisi.

Humphrey was considered “liberal” for his time.

The issue of the party’s favoring of primary contender Hillary Clinton over Bernie Sanders as evidenced by emails released by Wikileaks on July 22 was not raised except by protesters on behalf of Sanders, some of whom walked out of the convention.  Some placed tape on their mouths to demonstrate that they believed their votes had been disenfranchised and their opinions silenced.

There was also no mention of Clinton’s handling of her own emails which were directed through a private server set up in her home rather than government-supplied equipment and systems which could be searched as a result of Freedom of Information Act (FOIA) requests. The arrangement resulted in classified information being sent without proper security protocols and the hacking of Clinton’s private server allegedly by a Romanian man calling himself “Guccifer.”

An alleged second hacker, “Guccifer 2.0,” claims to have obtained the emails showing DNC favoritism of Clinton and attempts at marginalization of Sanders.  Some have attributed the hacking to the Russian government.

The first night of the 2016 DNC convention saw chairwoman Marcia Fudge booed loudly and at times overwhelmingly by Sanders supporters, and Fudge reportedly decided to strike an introduction of Tim Kaine as Clinton’s vice-presidential nominee “for fear restive Bernie Sanders supporters would stage an angry interruption.”

Former Obama Attorney General Eric Holder, who chose not to prosecute members of the New Black Panthers for a 2008 case of voter intimidation captured on video because it “demeaned his people,” said at the DNC that “We can respect and support our police officers while at the same time pushing for these important criminal justice reforms.  We can do both and we will do both.”

Humphrey saw the Democrat Party as “an instrument of progress” but said of the 1968 convention:

This week our party has debated the great issues before America in this very hall, and had we not raised these issues—troublesome as they were—we would have ignored the reality of change.

Had we just papered over the differences between us with empty platitudes instead of frank, hard debate we would deserve the contempt of our fellow citizens and the condemnation of history.

Yes, we dare to speak out and we have heard hard and sometimes bitter debate. But I submit that this is the debate, and this is the work of a free people, the work of an open convention and the work of a political party responsive to the needs of this nation.

Democracy affords debate, discussion and dissent. But, my fellow Americans, it also requires decision. And we have decided here, not by edict but by vote; not by force, but by ballot.

Majority rule has prevailed but minority rights are preserved.

On the last evening of the 2016 convention prior to Clinton’s acceptance speech, without warning, an actress speaking in a comical voice in a “Facebook Live” event introduced a topic considered by this writer to be “adult content,” at which time The Post & Email’s coverage of the convention halted given its child-friendly policy.

When the Dallas County sheriff, a woman, asked for a moment of silence for law enforcement officers killed in the line of duty in recent weeks, several convention attendees shouted out, “Black Lives Matter!”  During a follow-up interview with Fox News’s Greta Van Susteren, Sheriff Lupe Valdez denied that the shouting occurred during the moment of silence she led.

In 1968, Humphrey decried “tyranny” and predicted that “a new day will dawn” for eastern Europe, which was then under communist rule by the former Soviet Union.  Humphrey reportedly strongly opposed communism.

He also spoke about the need to improve conditions in cities:

The simple solution of the frustrated and the frightened to our complex urban problems is to lash out against society. But we know—and they must know—that this is no answer.

Violence breeds more violence: disorder destroys, and only in order can we build. Riot makes for ruin; reason makes for solution.

So from the White House to the courthouse to the city hall, every official has the solemn responsibility of guaranteeing to every American—black and white, rich and poor—the right to personal security—life.

Every American, black or white, rich or poor, has the right in this land of ours to a safe and a decent neighborhood, and on this there can be no compromise.

I put it very bluntly—rioting, burning, sniping, mugging, traffic in narcotics, and disregard for law are the advance guard of anarchy, and they must and they will be stopped.

But may I say most respectfully, particularly to some who have spoken before, the answer lies in reasoned, effective action by state, local and Federal authority. The answer does not lie in an attack on our courts, our laws or our Attorney General.

We do not want a police state. But we need a state of law and order.

We do not want a police state but we need a state of law and order, and neither mob violence nor police brutality have any place in America.

Humphrey believed that “law and order” were “rights,” along with the means to make a decent living.

Humphrey ran against Republican Richard M. Nixon, who also pledged to pursue “law and order” and the “rule of law” if elected.

And now the third reality, essential if the other two are to be achieved, is the necessity, my fellow Americans, for unity in our country, for tolerance and forbearance for holding together as a family, and we must make a great decision. Are we to be one nation, or are we to be a nation divided, divided between black and white, between rich and poor, between north and south, between young and old? I take my stand—we are and we must be one nation, united by liberty and justice for all, one nation under God, indivisible with liberty and Justice for all. This is our America.

Humphrey spurned “extremism” and said he would “appeal to reason and to your good judgment” for the outcome of the election.  “Remember that those who founded this republic said that in order to secure these inalienable rights of life, liberty, and the pursuit of happiness, they pledged their lives, their fortunes and their sacred honor,” he said, referring to the Declaration of Independence.

The Nixon Presidential Library reports that “The campaign of Vice President Hubert Humphrey, the Democratic nominee for president, went into a tailspin after the Democratic national convention in Chicago was marred by mass protests and violence.”

In 1993, then-President Bill Clinton touted “law and order” to control “violent crime” and employ additional police officers on the streets.  At the time, Bloomberg News reported that “blacks, too, are demanding action against the tide of inner-city violence.”

As of this writing, according to The Chicago Tribune, there have been 2,338 “shooting victims” in Chicago this year as compared to 2,988 for all of 2015.  Chicago was where Barack Hussein Obama performed “community organizing” and received his start in politics.

According to a 2007 Politico article, “During the mid-1900s, Hubert Humphrey was one of the toughest anti-crime mayors in America. But by the 1968 presidential campaign both Republican Richard Nixon and independent George Wallace were viewed as more capable than the Democratic nominee of doing the ‘best job in handling law and order,’ according to a poll that year.”

In November 1968, Humphrey lost very narrowly to Nixon, garnering 42.7 percent of the popular vote to Nixon’s 43.4%.  Third-party candidate George C. Wallace garnered 13.5% of the vote, all from the Deep South.  Nixon’s overwhelming win in the Electoral College included the states of Vermont, New Hampshire, and New Jersey; a majority of southern and mid-southern states; the entire Midwest except for Minnesota; and California, Oregon and Alaska.

Today, Republican presidential nominee Donald Trump has said that he and running-mate Mike Pence as the “law and order” ticket, while one source characterizes the Democrats as walking a “tightrope” on the issue.