WILL IT BE SANDERS OR CLINTON? 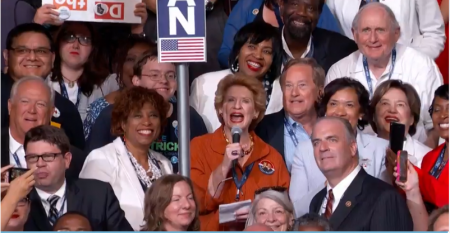 (Jul. 26, 2016) — Just before 6:00 p.m. EDT, a roll call vote is taking place at the Democrat National Convention in Philadelphia, which can be watched live here.

As with the Republican National Convention last week, the second night of the DNC saw roll call voting, with delegates expressing the will of the voters during the primaries for either Sen. Bernie Sanders (I-VT) or former Secretary of State Hillary Clinton.

Prior to the beginning of the roll call vote, a number of speakers addressed the convention hall to support Sanders’ nomination.  Sanders folded his campaign and endorsed Hillary Clinton on July 12.

This writer observed eight American flags, four on the left and right of the podium, respectively, which were not there last night, causing much public commentary on Tuesday morning.

Support for Sanders was also quite strong on Monday both inside and outside of the Wells Fargo Center.  On Monday 61 speakers addressed the delegates on a variety of issues including the rights of the disabled, immigration, proper conduct during the convention after booing temporarily overpowered Chairwoman Marcia Fudge, and the theme of the convention, “stronger together.”

On Friday, Wikileaks released nearly 20,000 emails hacked from the Democrat National Committee’s computer system showing that DNC Chairwoman Debbie Wasserman Schultz and members of her staff favored Clinton over Sanders during the primaries.  While Sanders acknowledged over the weekend that he had suspected as much and called for someone to assume “accountability” for the favoritism, he did not present a strong objection, instead speaking at length on Monday night and urging his supporters to vote for Clinton in November.

Schultz resigned her leadership of the committee and does not have a speaking spot over the four-day convention.

However, Sanders also said during his speech, “I look forward to your votes during the roll call vote tomorrow night.”

The leaked emails also showed a close working relationship between certain members of the press and DNC operatives.

No one at the DNC whose emails appear in the Wikileaks release has denied writing them.