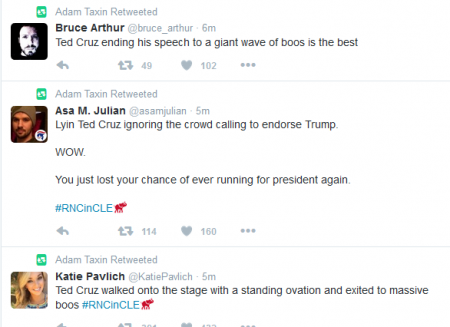 (Jul. 20, 2016) — Supporters and detractors of both Donald Trump and Sen. Ted Cruz were alternately pleased on Wednesday night when Texas Sen. Ted Cruz gave a speech at the Republican National Convention (RNC) in Cleveland.

Cruz began by congratulating Trump on his nomination but did not endorse him throughout his approximately 20-minute speech.

He spoke about freedom, the U.S. Constitution, recent police murders and the grief experienced by surviving family members, and encouraged attendees to “vote their conscience” in November.

Many speculated as to whether or not Cruz would endorse Trump, which he did not.

Cruz was welcomed by enthusiastic cheering, including that of “USA, USA!!” but left the stage amid a combination of boos, described as “deafening” by one Twitterer and cheering which was shared by observers on Twitter.

Some commenters and supporters opined that Cruz’s speech was very effective.  “Ted Cruz remains true,” wrote Conservative Review’s Amanda Carpenter, who is rumored to have had a romantic relationship with Cruz several years ago and was an activist in the #NeverTrump movement.