“WE’RE NOT RESTING UNTIL ELECTION DAY” 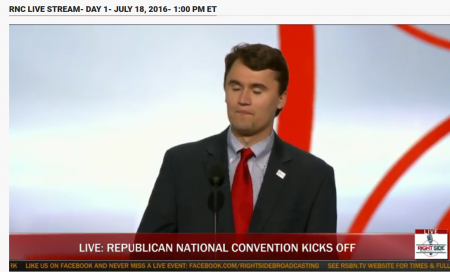 (Jul. 18, 2016) — The RightSide Broadcasting Network is providing live coverage of the Republican National Convention in Cleveland, OH, which began at 1:00 p.m. EDT.

As of 2:31 p.m. EDT, a number of speakers have addressed the convention including an Arizona state senator, a member of the Rules Committee, and a young female Republican leader who stated that millennials reject a “one-size-fits-all” approach to politics and governance.

“Four years ago, millennials lost the election for us,” she said early in her remarks.

The founder of a free-market organization then spoke, citing diversity within the Republican Party and a growing number of young governors.  “We are the party of youth and diversity,” he said.

Speakers at this time are generally taking approximately two minutes each.

The president of the National Federation of Republican Women is speaking at 2:40 p.m., stating that her organization is “committed to putting a Republican in the White House” in 2016.  “We’re not resting until Election Day,” she said.