BUT VARIOUS AUTHORITIES WERE PREPARED 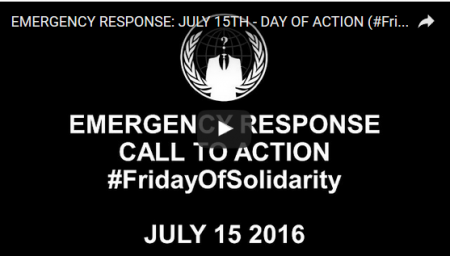 (Jul. 15, 2016) — A series of protests purportedly promoted and organized by the hacker group “Anonymous” or a possible affiliate in an internet video did not materialize on Friday.

A North Carolina publication stated that the widespread reports of protests based on the video which appeared to have been authored by Anonymous amounted to “fear-mongering,” yet law enforcement around the country prepared itself to deal with protesters if the events, which were predicted for more than three dozen U.S. cities, materialized.

The newspaper also claimed, referring to Republican presumptive presidential nominee Donald Trump’s Twitter feed, that “NC Team Trump, for example, is all ginned up about this story, because it seems like an excuse to call the Black Lives Matter movement a terrorist organization.”

Black Lives Matter formed as a result of police shootings of black men and specifically, Michael Brown of Ferguson, MO, who was killed in August 2014 by then-Ferguson Police Officer Darren Wilson after Brown struck him and attempted to grab his gun.

Obama has met with BLM members at the White House and supported the narrative that blacks are unfairly targeted by police.

On Wednesday, The Post & Email queried the FBI about the content of the “Anonymous” video and whether or not the agency had formulated a response plan if the protests took place. In response, the FBI’s National Press Office stated that it “had no information to provide” us.

The FBI additionally noted that the voice in the video, which depicted two recent killings of civilians by police officers in as many locations, called for non-violent protests.

The video’s narrator, however, termed the alleged national event “Days of Rage,” the same moniker applied to an October 1969 protest carried out in Chicago by the Students for a Democratic Society (SDS), a socialist group.  Some SDS members later joined The Weathermen, which became The Weather Underground, led by Bill Ayers and Mark Rudd.

Ayers and his wife, Bernardine Dohrn, hid from authorities for approximately a decade after orchestrating a bombing of the U.S. Capitol in March 1971. In Ayers’s book, “Fugitive Days,” he described how he and his cohorts became skilled at stealing identities and creating false identification documents in order to avoid apprehension.

Ayers and Barack Obama became acquainted in Chicago where they served on the boards of educational and charitable foundations, with Ayers holding a fundraiser for Obama’s launching of his Illinois state senate campaign in 1995.

Obama’s long-form birth certificate, ostensibly posted on the White House website on April 27, 2011, has been declared fraudulent, as has his Selective Service registration form, by criminal investigators working for the Maricopa County, AZ Cold Case Posse.

Despite their obvious acquaintance beginning in the 1990s, during his 2008 presidential campaign, Obama insisted that Ayers was “a guy who lives in my neighborhood.”

The protests allegedly planned for major cities across the country on Friday were said on the video to include Black Lives Matter (BLM) as an active participant.

According to The New York Post, the U.S. Department of Defense instructed its employees “to steer clear of tomorrow’s demonstration outside the White House protesting the recent spate of fatal police shootings across the country.”

Dallas police were reportedly “on alert” for the protest reportedly scheduled for that city in the wake of the murders of five police officers last Thursday.

Friday morning’s broadcast of “Fox & Friends” headlined on Twitter that “Police bracing for ‘Day of Rage’ protest in 36 cities nationwide.”

On Thursday, The Blaze reported that a similar false “rumor” two years ago was replicated in the “Anonymous” video released last Saturday which generated the news reports and preparedness expressed by various police departments and the DOD.