The Little Congress that Couldn’t or Wouldn’t

WHAT PURPOSE IS IT SERVING?

(Jul. 14, 2016) — Barry Soetoro-Obama, or whatever his correct name may be, has been usurping the office of President of these United States for some seven and one-half years. He has accomplished absolutely Zero of anything of value. OH! He has rid us of our annual Day of Prayer; he has turned Christmas into something other than the celebration of the birth of Jesus Christ. He has, in his mind, legalized homosexuality, bestiality, sodomy, infanticide, murder, treason, perjury and numerous other offenses and offensive attitudes. He has had a weak, ineffective series of Congresses do his bidding in the manner of a royal sovereign, a dictator, a bully boy.

The four successive Congresses sitting and twiddling their thumbs without a clue as to how they might reinsert themselves into our government and start acting like the Legislators they are supposed to be. The current House calendar is indicative of the manner by which our elected legislators propose to keep us on course. Their work schedule is intertwined around their “District Work,” which actually means the days they take off to go home and campaign and to schedule a series of photo and TV propaganda for local consumption.

While this once-powerful, influential, generous and charitable republic is being overrun by illegal, government-protected aliens, terrorists and enemies of the state, our Congress sits on its hands, buries its collective head in the sand and plays footsie with a TRAITOR and numerous accomplices. Any citizen can simply enter into the address bar on a computer “ushouseofrepresentatives.gov” and in the search box on the House site enter “House Calendar,” and voilá! Here is what you will see: 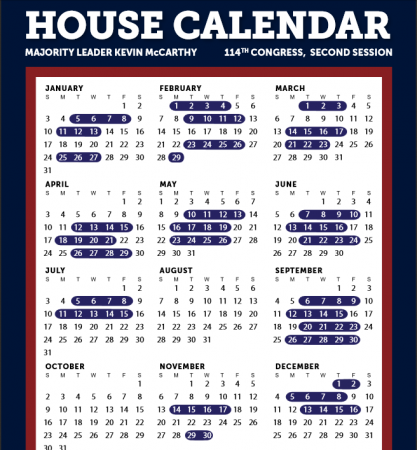 Then you will notice the work schedule, the little that there is:

What you see is what you get; our elected, overcompensated servants are being paid to do darned little of any value. Obama’s traitorous activities should be priority Number ONE on the House Agenda. But, it is not even mentioned anywhere. First on the agenda for every last one of these phonies is, “How can I keep this lucrative position and make a fortune while doing so?”

BUT! Why should I care? I am 91 years old with so little time to do so much that needs to be done. There are thousands of military veterans suffering PTSD, grievous wounds, using artificial limbs, and surviving with a growing family; so many abandoned children unable to fend for themselves; and yet you insufferably egotistical cowards have the unmitigated gall to permit a TRAITOR to persist in pursuing his hate-America, hate-Christianity and Judaism, hate our earned freedoms, hate our natural morality and dictatorially instituting “gay marriage” and legalized perversion upon our less-educated. He has endorsed NAMBLA, a total perversion.

Obama has never, not ONCE, in his years of pontificating and treason, attended the Annual “D-Day Remembrance (29,000 Americans killed) services in Normandy and never gets to Arlington where lie the remains of over 200,000 dead.

Every member of Congress is complicit in Obama’s crimes, they know all about them or should if they have open eyes and a modicum of intelligence. Their first priority MUST be, “Impeach the monster fouling the entire nation from his usurpation of the office of President.”

The Little Congress that Couldn’t or Wouldn’t added on Thursday, July 14, 2016