THE SHADOW OF INJUSTICE GROWS 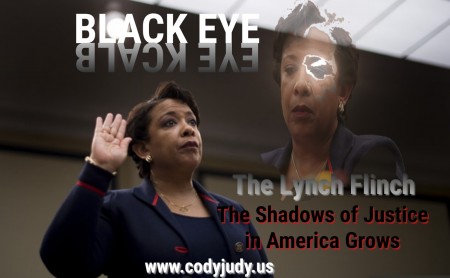 (Jul. 13, 2016) — Testifying before the House Judiciary Committee the nation’s top law enforcement official gave a sterling performance for any accused criminal on how to duck and dodge questions to avoid justice and responsibility.

One congressman noticed the absconding had totaled over 75 questions that A.G. Loretta Lynch had made to questions posed by congressmen.

What came out of the hearing was essentially that the Attorney General wanted to have it both ways.

She wanted to acknowledge very strongly she simply took the FBI’s recommendation and had no part in formulation of any opinion, (with her unprecedented acknowledgement she would do so right after her meeting with Pres. Bill Clinton on the tarmac in Arizona), while at the same time she refused to recuse herself and would have us believe she had reviewed the information thoroughly in a couple of hours the day after SOS Clinton’s unrecorded and unoathed Saturday deposition with the FBI.

What was clear after 30 Million dollars of an FBI’s 50-man team, one-year-long investigation is the American people did not have an attorney general fighting for justice.

Rep. Steve King did an excellent job in his five-minute deposition of A.G Loretta Lynch. Rep. Trent Hanks had great thoughts and exposed the attorney general’s testimony as truly disappointing of justice.

The overview was the A.G. basically admitted she was in gross negligence of overseeing any oversight of the investigation. The extremely careless recollection of statute was evident by the attorney general as to the actions of Hillary Clinton considering the investigation.

She made no reference to the avoidance of FOIA being considered a crime on the list.

Rep. Louie Gohmert  made it a point to point out the A.G.’s job under oath was to the Constitution and the law over and above the FBI’s recommendation, but it was clear the Justice Department had a lot of input in drafting the FBI director’s statement per Justice Department considerations made by a seasoned and career panel assisting the FBI.

Rep. Jim Jordan corralled the A.G. into admitting the Justice Department through her had “no impact” on any Hillary Clinton decision – she had no role but that she had contributed in her own unprecedented way in a prosecutorial discretion of a high official.

In a discussion of prosecutorial discretion the type of threat and violent backgrounds were considered in factors to prosecute. No mention that national security of Top Secret intel weighed heavy in type of threat or Hillary Clinton’s domestic abuse upon Pres. Bill Clinton while First Lady in scratching him so bad he required covering bandages and minced he cut himself shaving., or, the abuse of hassling women who made accusations of sexual harassment in the domestic violence category.

Rep. Trey Gowdy made the point that the A.G’s own email practices requires she use two different government systems to communicate via email: one for general business and a more secure one for any classified info, setting the double standard of practice and conclusion wide open to the understanding on Main Street.

He trashed her on the issue of prosecuting cases with damages even that had no intention to do harm, but caused it, like manslaughter or vehicular homicide. This showed “intent” was not necessary under more minor violations of gross negligence.

Several congressmen asked the top law enforcement officer what her opinion was in the difference between gross negligence and extreme carelessness, but she refused to give a coherent explanation.

2 Responses to "The Lynch Flinch"