“THE PROGRESSION OF CORRUPTION” 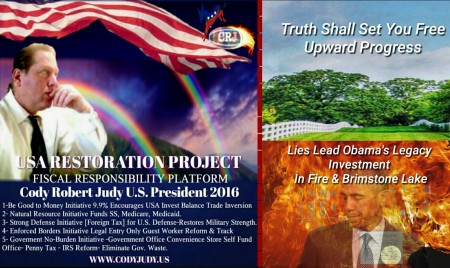 (Jul. 11, 2016) — It’s hard not to place Birthers high on the Pedestal of Political importance when Obama chose not to release his long form birth fabrications that split up like game of thrones levels as the PDF’s did Obama released to the Press three years after the 2008 election.

The example of getting-away-with -it when enough elite Government Officials decide the consequences are not worth prosecuting was a precedent here and continues with Hillary Clinton in more of a blackmailing way than ever.

It’s the progression of corruption that has hell for its destination like any lie does unchecked and un-confessed. The only way to gain relief from the lie is to admit the Birthers were right.

Truth is the power over a lie because Truth is a base that has no break down or lower level. It stands as a solid foundation. Lies are built up like a House of Cards.

We have seen the Lies Hillary Clinton actually told as if she’s been compelled to utter on the levels built by Obama. FBI Director Comey addressed them fairly thoroughly but with little legal consequence although political consequence cannot be underestimated as a discipline.

My point is when we understand upward progress is prohibited upon the steps of a Lie, you cannot lie your way into Heaven, we should understand the only Progress allowed under the heavens in a lie leads downward.

Look at the 10 Trillion dollars of Debt duding Obama’s 7.7 years, more than 42 Presidents before in U.S. History, as a sign of Truth.

Look at the witness of ineptitude and Google  “25 Scandals and Growing” with Obama.

Look at the Witness of Lies about Benghazi costing American Lives and the “Video” blamed by Obama and Hillary weeks before the 2012 elections. It’s like they were compelled in Cover Up because the consequences meant the Truth would be known and they just couldn’t live with that.

Lives, Treasure, and Time wasted on lies as an investment for Hell’s Real Estate is ultimately an investment in the Lake of Fire and Brimstone. Corruption is the instrument in the destruction of corruption in the action of reaping the Harvest. It is not the pleasure of green pastures and peace.

The question simply remains what progress do you expect and want? The answer to that reveals your inheritances understanding this life is to prove our value and glory of Truth.

This video simply remembers the identification Fraud present in the Office of President understood by the person Barack Hussein Obama.

It was never the intent or purpose of the Cold Case Possession to prove whether Obama was Constitutionally qualified, only that the three-year quest for Obama’s long-form birth certificate ended with Obama releasing a fabricated identification that wasn’t a scan.

The Truth was Obama’s father was not a U.S. Citizen confirmed by the release of this. That simply confirmed Obama was not born in the U.S. to citizen parents at the time of his birth.

The qualification in the Constitution considered in the U.S. Supreme Court Case of Minor v. Happersett. “It was never doubted those born in the country to citizens were themselves the natural born Citizens; as to the others there have been doubts.”

We heard FBI Director James Comey last week say in the “U.S History” of prosecution only one case was prosecuted in the charge considered for Hillary Clinton: a case of espionage. While failing to consider criminal intent and the legal crime considerations in this investigation he would not confirm the avoidance crimes of FOIA did not apply or that the Clinton’s Charity Foundation(s) were cleared.

The frustrations of those working downward is they cannot change their direction to upward progress [unless] they confess and repent of the Lies.