The nation watched as FBI Director James Comey gave Hillary Clinton a free pass after listing her many violations of law and oath, jeopardizing national security last week. We watched a typical dog and pony show of a congressional hearing on the matter, which is also going nowhere…

Tonight on TNALC Radio, NALC Lead Counsel Stephen Pidgeon and co-founder Timothy Harrington will discuss the law, the inaction by the FBI and Congress and what YOU can do about it in the polls come November.

Pidgeon and Harrington will also discuss the recent cop assassinations in Dallas and the growing “racially charged violent community organizing” responsible for these vicious attacks, so-called “peaceful demonstrations” and how the political left in America has been profiting from these types of civil unrest for decades.

To keep us on the move, please support TNALC.org with your contributions! (Use link below) 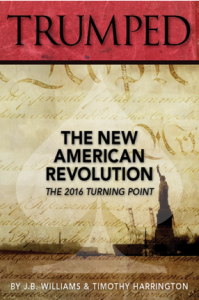 TRUMPED: The New American Revolution will start shipping out to consumers next week.

ORDER YOUR COPY TODAY at COFBooks.com

TRUMPED: the New American Revolution is about a national movement to “make America great again,” a second American Revolution to restore the Constitutional republic via a rebirth of the Republican Party, represented by the political establishment outsider Donald Trump. That movement can be best described as an organic uprising by the conservative base of the Republican Party, fed up with the anti-American counter-revolution against America that consumes Washington D.C. politics.

One Response to "Pidgeon and Harrington on TNALC Radio 5:00 p.m. ET Tonight"