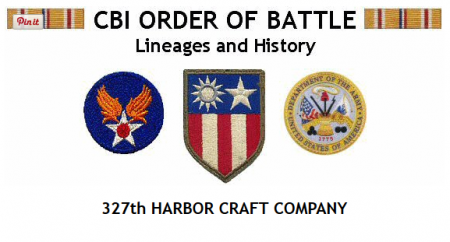 (Jul. 10, 2016) — In May of 1943, Lt. Gen. Raymond A. Wheeler submitted a plan for the restoration of communications in Burma in the then China-Burma-India theater of operations. Part of this plan included a proposal to establish an American barge line on the Irrawaddy River in Burma. Emphasis later shifted to development of the Assam Line of Communication (LOG). Some of the equipment and troops was then to be used to set up a long-haul barge operation on the Brahmaputra River. Requirements set forth in the fall of 1943 included 400 barges of 4-foot and 5 1/2-foot draft; 114 wooden towboats of 3 1/2-foot draft; 180 Chrysler-powered, twin screw Sea Mules with a 5.5-foot draft; 26 wooden patrol boats; an inland waterways headquarters; four harbor craft companies; a port battalion and an Engineer battalion.

While all these plans were being made, it was readily apparent that water transportation was to play a major role in CBI, and six Harbor Craft Companies of some 200 men each were organized and began training in Charleston, South Carolina. Two (2) of these companies were destined to be sent to CBI, the 326th and 327th.

In late June or early July of 1943, the author joined the 327th Harbor Craft Company. The unit was commanded by Captain U. G. Moser with Earl Ware as First Sergeant. Platoon Officers were 1st Lt. Henry L. Stubbs, a schoolteacher from Opelousas, Louisiana, Lt. Jerome Voeller and Lt. Cockrell. Memory fails when it comes to Capt. Ralph W. Johnson who later commanded the unit and 1st Lt. Frank J. Reardon who served at Goalundo.

There were insufficient water craft available at that time to train as a unit or to even practice the operational and navigational skills that would become necessary once the unit reached India. Much time was spent on close-order drill, extended-order drill, long marches, parades, guard duty, KP and the other tasks available to keep the troops busy. Personnel were housed in single-story, tarpaper-covered ‘barracks’ which were hot as hell in that summer of ’43. The barracks were about 60 feet long and just wide enough to have two double-decker wooden bunks end to end with a 3-foot passage between. Heating during the winter of 1943-’44 was provided by one coal-burning space heater about 20 feet from each end of the building. To say the least, housing conditions were just above primitive.

Some of the training included practice on debarking a ship via the infamous cargo net, marksmanship at simulated aircraft and a trip to the Isle of Palms to try our hand at the DUKW (the old seagoing deuce and a half). Quite a few members of the 327th had been sent to Charleston ostensibly to be assigned to an amphibious unit which operated DUKWs. Thank God for small favors; as it later turned out, river and harborcraft operations were preferable. A trip to Fort Jackson to run the obstacle course was thrown in for good measure. One of our members, Pvt. Gallagher, a former drummer on a coastwise cruise ship, and rather large, over 225 Ibs. passed out. This author, at that time a skinny little Private all of 130 pounds, was directed to pull Gallagher to the finish line. Mission accomplished; we both survived.

In November of 1943, an entity known as American Barge Lines (ABL) was established and headquartered near Calcutta. An Engineer unit was assigned to ABL and began to assemble equipment which began arriving in the theater in early 1944. The Engineer unit was located in Khulna on the Kazi Bacha River and their major assembly units were the wooden BK barges of shallow draft, about 50-feet long and some 20-feet wide. The largest barges they assembled were of steel construction with interior tanks for fluid shipment. They were about 110-feet by 40-feet with 4-feet of draft empty and 9-feet filled with fluid.

In the January, 1998 issue of Ex-CBI Roundup an article by James L. Watson, “The 504th Engineer Light Ponton Co.” noted that his unit arrived in Calcutta some months prior to the 327th Harbor Craft Company and assembled the floating cranes at King George Docks. The 504th also had the task of performing harbor duties and some river duties which would later be the responsibility of the 327th. Good going 504th!!! Watson is absolutely right about the horrendous Hooghly River traffic and tides!!

This may be an appropriate spot to clarify the waterways upon which the 327th would ultimately operate. Firstly, the two dominant rivers were and are the Ganges (Ganga) and the Brahmaputra. The Ganges has its headwaters in Uttar Pradesh State, India, in the southern portion of the Himalayas. It actually begins as the Pachila River on an ice cave at roughly 10,300 feet above sea level and falls about 350 feet per mile for some 150 miles. Near the village of Devaprayag, a point around 133 miles from its source, the Pachilati joins the Alaknanda to form the Ganges. From there it levels out somewhat to a fall of about 60 feet per mile continuing on in a southeasterly direction to Allahabad about 630 miles from its source. This first 600 plus miles is unnavigable due to shoals and rapids.

At Allahabad the Yamuna River from the southwest joins the Ganges which continues on past Benares, India’s most holy city now called Varanasi, and picks up several more tributaries such as the Son from the south and, from the north, the Gumti, Ghaghra, Gandak and Kosi Rivers. Near the top of the Ganges delta in the Rajmahal Hills and some 550 miles from Allahabad, the river turns south and begins its 285 mile descending route to the Bay of Bengal.

Near Pakaur, one branch departs the main river, assumes the original name of the Ganges and is again called the Pachilati. Some 70 miles further down, the Jalangi branches off the Ganges. These two follow individual courses for 120 miles and then unite to form the Hooghly which is the westernmost and principal channel of navigation. Calcutta, which in 1944-45 was the largest city in India and 2nd largest in the British Empire, is located on the east side and 75 miles north of the Bay of Bengal.

The main branch of the Ganges continues on into Bangladesh which was formerly Bengal State and takes on the name of Padma River. At Shivalaya (Sibalay) it joins with the Jamuna which is the main branch of the descending Brahmaputra and flows southward through the Meghna estuary into the Bay of Bengal. The Brahmaputra (taken from the Sanscrit meaning “Son of Brahma”) is nearly 1700 miles long. It begins its journey in the Kailas Range of the Himalayas of southwestern Tibet at an elevation of 17,000 feet and is known as the Yarlung Zambo. It flows eastward and then southward through Arunachal Pradesh State in India and into Assam where it is called the Dihang. Near Sadiya, Assam, it changes course to the southwest and becomes the Brahmaputra. After turning south again some 500 miles further down, it flows on into Bangladesh and, as previously noted, becomes the Jamuna, joins the Padma (Ganges) and flows into the Bay of Bengal. Steamers are able to navigate from the Bay of Bengal 800 miles north to Dibrugarh. Between the western Hooghly and the Jamuna are the many deltaic channels which form the ‘Mouths of the Ganges.’ The southern portion is mostly swampland known as the Sunderbans, named for the sundari tree that flourishes there. It is a most forbidding place, unpopulated by humans but with a huge population of creatures who do not take kindly to human intrusion. Man-eating Bengal tigers, many varieties of poisonous reptiles and several species of crocodiles frequent the entire area.

The 327th departed Hampton Roads, Virginia, on March 6, 1944, aboard the General Mann. The first night out was one of the roughest most of us could remember; this coming from men who had served in the Merchant Marine on the Murmansk run, veterans of the Pacific on troop and supply transports to the islands, Australia, New Guinea, Alaska, the Aleutians, etc.