SEEKING SEDDIQUE MATEEN’S COMMUNICATIONS WITH THE STATE DEPARTMENT, IF THEY EXIST 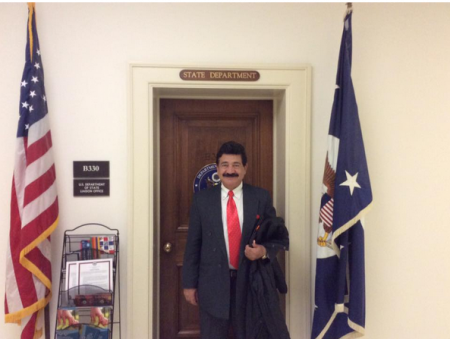 (Jul. 9, 2016) — On June 15, 2016, The Post & Email published an article in response to an external blog post which appeared to accept the premise that pictorial depictions released by Seddique Mateen, father of Orlando nightclub terrorist Omar Mateen, accurately showed the elder Mateen as having visited the U.S. State Department and possibly the White House.

On June 12, 2016, 29-year-old Omar Mateen entered the Pulse nightclub and massacred 49 people, took others hostage, and wounded 53 in an attack which appeared to take his father, Seddique, by surprise.

Seddique appeared to have been outspoken about Afghani political affairs on his now-defunct Facebook page and depicted himself  as the “interim president of Afghanistan,” however satirical his intent might have been.  Mateen additionally hosted Afghan president Mohammad Ashraf Ghani on an edition of his political television show titled “DurandJirga.com.”

According to The Washington Post, that interview may have taken place in 2009, before Ghani ran for Afghan president.

Videos of the DurandJirga broadcasts, which reportedly discuss the boundary, or Durand Line, between Pakistan and Afghanistan and other political issues, are still available on YouTube.

A response from Carl Woog of White House Media Affairs to The Post & Email’s question as to whether or not Mateen ever visited the White House reads:

I received your e-mail and I wanted to reply that this does not appear to be a photo taken at the White House.

According to Catherine Herridge of Fox News in a June 15 broadcast of “The O’Reilly Factor,” the elder Mateen was granted entry to the U.S. during the 1980s, but because of privacy laws, very little information was released about his status by the State Department.

Mateen is said to have met with several members of Congress.

On or around June 18, the website ijreview.com reported that “This April, Mateen was in Washington, D.C., doing advocacy work with Congress and the State Department,” information gleaned from Mateen’s Facebook page.  Mateen’s alleged visit to State was stated as: “He is advocating for U.S. intervention between Pakistani and Afghan fighters on the border of both countries. One caption in English reads: ‘We have the duty to tell the world that Pakistan is the killer of Afghan people.’”

The website includes a photo showing Mateen saluting an Afghani flag, and the fact that The Washington Post reported that “In one [Mateen Facebook page] video, the elder Mateen expresses gratitude toward the Afghan Taliban while denouncing the Pakistani government.”

The BBC describes the Taliban, which provided safe haven to Osama bin Laden while he planned the 9-11 attacks on the U.S. which killed nearly 3,000 people, as a “hardline Islamic Taliban movement has proved to be a formidable fighting force in Afghanistan and a major threat to its government.”  The CFR states that the Taliban is “a predominantly Pashtun, Islamic fundamentalist group that ruled Afghanistan from 1996 until 2001, when a U.S.-led invasion toppled the regime for providing refuge to al-Qaeda and Osama bin Laden.”

A website on Asian history further states of the Taliban, “They adhere to and enforce a harsh interpretation of Sunni Islam, including requirements that men grow beards, women wear full burkas, and that convicted thieves have their hands cut off with a sword.”

When The Taliban ruled Afghanistan, its treatment of women and girls was brutal and in many cases, deadly.

Mateen has made other strong statements opposing the government of Pakistan, labeling its intelligence service, the ISI, “the American & Afghan Services Killer.”

Ijreview also shows Mateen in a photo holding a banner which reads, “Only Durand Jirga can bring peace with the Taliban if the US State Department helps.”

A June 12 Buzzfeed News article references an alleged meeting between long-time New York congressman Charles Rangel and Mateen.  The article, titled “Spokeswoman: Rangel Didn’t Meet With Father Of The Orlando Shooter,” states that “A spokeswoman for Rangel, a New York Democrat, told BuzzFeed News that the congressman was stopped in the hallway for a photo and obliged. There was no formal meeting between Rangel and Mateen, she said.”

However, Rep. Ed Royce reportedly did meet with Mateen in late 2014 or early 2015. According to CBS, Rep. Dana Rohrabacher and his office gave conflicting statements as to whether or not Mateen met with the congressman.

Both Royce and Rohrabacher represent districts in Southern California.  Mateen’s television show is produced in that area.

CBS Los Angeles reported that Mateen was in Washington, DC on the same day as Obama’s 2015 State of the Union address.  On June 13, the day following the nightclub assault, Newsmax reported that “The father of the suspected shooter in the Orlando terror attack visited Washington, D.C. earlier this year and walked the halls of Congress. Last year, he met high-profile lawmakers on another trip.”  The news source took seriously Mateen’s depiction of himself as a candidate for Afghanistan’s next president, although Ghani took office in late September 2014.

Because of privacy laws, whether or not the elder Mateen ever swore an oath of allegiance and became a citizen of the U.S. is unknown.

On June 20, The Post & Email filed a FOIA request with the U.S. State Department through its website requesting emails and/or other documentation exchanged between Seddique Mateen and State between the years 2000 and 2016, if they exist.

Last week, The Post & Email received a response from State acknowledging the request which stated, “We will notify you as soon as responsive material has been retrieved and reviewed.”

FOIA law states that responsive documents must be provided within 20 business days of the agency’s receipt of a request. The second page of the mailing outlined the possible costs involved in obtaining the documents.