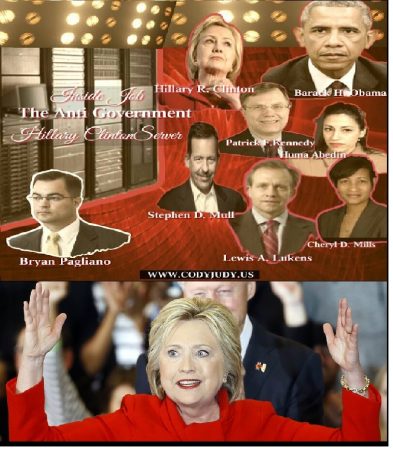 (Jun. 30, 2016) — Hillary’s conceptual semantics game with the FBI Criminal Investigation, as well as the Judicial Watch Citizens United FOIA, just went into overdrive. On the one hand we have Hillary stating she did not want any chance of her personal emails becoming public to her long- time aide Huma Abedin, recently deposed under oath. On the other hand Hillary knew all of the emails on her personal server were not subject to anyone but herself as judge, jury, and deliverer to any FOIA REQUEST. So ‘all the emails’ she was referencing in an email correspondence with aide Huma Abedin were in fact “personal” to her and in conceptual semantics she knew the State Department would have to go through her to get anything off her personal server, in fact making every email she wrote, whether personal or business, or received as Secretary of State, personal. This is how the Secretary of State Office of the United States Government was subverted and usurped. No one else had access to it until the FBI recovered what they did after her server was confiscated.

If we are privileged to Hillary’s own brand of conceptual semantics, she has just reported to her husband over dinner, “The ICEBERG TIP has just cracked through the hull, Bill, and we’re taking in serious water.”

Clinton responded in the 2010 exchange that she could get a “separate address or device” but said she didn’t “want any risk of the personal being accessible,” according to the e-mail chain. Abedin replied that the missed communications were “not a good system.”

Again, “personal” included all secretary of state business emails, because in Hillary’s mind, the State Department did not have access to her personal server she knew she was conducting all of her secretary of state business on. To shore up this point we simply need to ask Hillary why she chose to go through herself and decide which emails were personal and which ones were private. The follow-up question would be, “How did you expect the State Department to submit to FOIA requests on the Secretary of State Office under your tenure?”

State Department spokesman Mark Toner said that Clinton had said repeatedly that the 55,000 pages represented “all federal email records in her custody.”

We know of 165 pages that were not submitted but were indeed Secretary of State Business. On Monday, Judicial Watch published an additional 165 pages of e-mails from Clinton’s time as secretary of state. Those e-mails sabotage Clinton’s claim she turned over all work-related e-mails to the State Department after stepping down in 2013.

A June 29th AP Report states, “Judicial Watch lawyers repeatedly pressed Abedin to explain Clinton’s concern expressed to her in a November 2010 message that her emails might become public, but the longtime aide insisted that Clinton’s interest in wanting to keep her personal correspondence from being exposed was similar to any private citizen’s.”

That’s where we see the ‘semantics code’ being used between Hillary Clinton and Huma Abedin. They both knew that the State Department had no access to Hillary’s private server of which Huma, in her continued employ after the New York U.S. Senate and 2008 presidential run with Hillary, took up residence with her own Clinton-server email address.

The AP Report is grossly covering tracks for Hillary Clinton, or is in the journalistic mire of the campaign’s clutches, as the two paragraphs from the story relate:

“Longtime Hillary Clinton aide Huma Abedin said in a legal proceeding that Clinton did not want the private emails that she mixed in with State Department emails on her private computer server to be accessible to ‘anybody,’ according to transcripts released Wednesday.”

“But Clinton’s private server contained tens of thousands of work-related emails as well as private messages, and her decision to conduct both private and government business on her system meant that she kept control of both types of correspondence, effectively preventing her State Department correspondence from being archived by the agency and made available for public records requests. It was not until late 2014 – more than a year after Clinton left office – that the State Department learned that she held all of her email and requested that she turn over all work-related records.

Iceberg Tip: On A Personal Server, All Emails Are Private added on Thursday, June 30, 2016