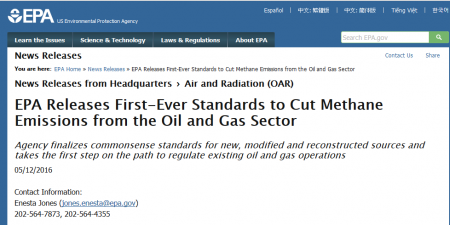 (Jun. 17, 2016) — Bureaucrats have been given another political target in their misguided war on fossil fuels—methane.

Methane emissions occur throughout the natural gas industry, for example. They come from normal operations and maintenance as well as due to unintended and irregular leaks and equipment venting.

The Environmental Protection Agency (EPA) final rule on new, modified and reconstructed sources of methane from the oil and gas sector, unveiled on May 12 is part of the Obama administration’s fight to ‘stop climate change.’ It will help the United States move closer to President Barack Obama’s target of reducing oil and gas sector methane emissions by 40% – 45% from 2012 levels by 2025. It also provides a legal stepping stone to regulating emissions from one million existing wells, something Obama promised during a March summit with Canadian Prime Minister Justin Trudeau.

When releasing the new regulations, the EPA admitted that the rules will add about $530 million—at least 25% higher than their estimates only nine months earlier—in additional costs on the sector per year by 2025. Companies will have to upgrade pumps and compressors, and expand the use of technology designed to capture methane that can be released by newly fracked wells. The costs of exploring, producing, and delivering natural gas will all rise, likely driving many small oil and gas producers out of business and further threatening America’s energy security.

The 2014 study conducted by the American consulting firm ICF International that was used to justify the EPA regulations projected a cost of $0.66 per thousand cubic feet (Mcf) of methane reduced.

Since then, natural gas prices have dropped considerably, making it far less attractive for companies to collect the lost gas for sale. So ICF re-run their study. And what they have found is staggering.

In their June 2 report, ICF demonstrated that the cost to reduce methane emissions from natural gas systems is now $3.35/thousand cubic feet (Mcf) of methane reduced, about five times the original estimate.

Oil and gas industry leaders say that methane regulations are not needed since the sector is already reducing emissions on their own. Indeed, the very slight increase in methane levels since 2007 is not coming from hydrocarbon fuel production, according to a new study initiated by NOAA and other scientists around the world.

But industry does not bring up the most important point: any rules restricting methane are almost certainly pointless from a climate change perspective. Our knowledge about the impact of methane emissions on climate is far too immature to warrant the imposition of crippling costs on the sector and a public that rely on inexpensive power for their prosperity.

The EPA leads the deception. They state on their Website:

This is the misleading since it ignores water vapor. The EPA does this because the United Nations Intergovernmental Panel on Climate Change (IPCC) ignores it. The IPCC concluded that, while humans produce water vapour (for example, from reservoirs), the amount is so small relative to the total in the atmosphere (water vapour is 95% of all greenhouse gases by volume while carbon dioxide (CO2) and methane (CH4) are 4% and 0.36% respectively) that our production is of no consequence.

They can’t possibly know this because we lack even remotely accurate measures of total atmospheric water vapour or how much it varies in space in time.

When climate alarmists finally recognized that there was an upper limit to the warming capacity of CO2, they needed a new paradigm to continue the climate scare. After all, a variation in water vapour of at most 1% equals all the possible warming from human produced CO2.

At first glance, the new hypothesis sounded feasible: as the atmosphere warms due to rising CO2 levels, evaporation rates increase which amplify the supposed CO2-induced warming. In turn that leads to more evaporation and so on; in other words, a positive feedback.

Problem was, the hypothesis was quickly debunked by scientists in the field.

The EPA claims: “Globally, over 60% of total CH4 emissions come from human activities.”

Such confidence is irrational. It was only in 2006 that researchers discovered that rain forests are a major, previously uncounted, source of methane. Similarly, in 2010, it was found for the first time that a wide expanse of Arctic Ocean seabed is bubbling methane into the atmosphere.

If one is unsure about the amount of methane coming from natural sources, as indeed we are, you can’t determine the relative importance of the human contribution. And if one cannot determine our relative contribution, then another pillar supporting climate change alarm crumbles.

The determination to find a human cause of assumed methane rise has created tunnel vision. A list of targets included;

·       Termites: forest clearing in Africa created more termite habitat which supposedly increased methane emissions. But then they discovered that termites numbers were overestimated by a factor of four.

·       Cattle: there has been an increase in cattle, especially in North America. However, they ignored the parallel decrease in ruminants such as bison, elephants, and others. Those decreases are regrettable, but a fact in proper scientific assessment. In an apparent effort to appease political correctness, not included was the impact of 250 million sacred cows in India, or the increase in Asian rice paddies, the second largest source of human-produced methane.

“Reducing methane emissions is a powerful way to take action on climate change.”

The EPA estimates the costs of their new methane rules will be offset by $690 million a year in savings by 2025 from averting severe storms, floods and other consequences of climate change.

This is ridiculous. Even if it were correct that methane emissions from human activities is an important driver of climate change, EPA regulations are estimated to reduce global warming only 0.002°C by century’s end. Such an amount is too small to even be measured, let alone have any impact on climate-related events.

This is worse than pseudo-science, it is deliberate deception to create ‘science’ for a political agenda. The next president must end this expensive charade.