AN OPEN LETTER TO MODERATE DEMOCRATS 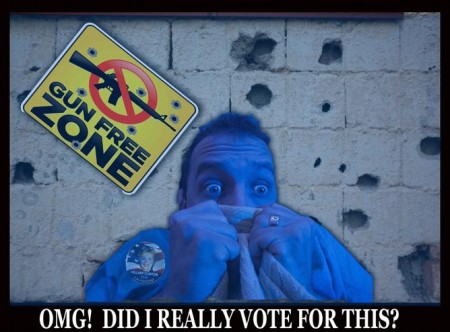 (Jun. 16, 2016) — Your Democratic Party has not just left you, it has deserted you.  It has catered to the eccentricity of the socialist outliers and isolated you.  This party is no longer the party of your parents. Locally this may not be true, but nationally they have morphed into ungodliness and globalism.  This is difficult to accept, but for the sake of this country and the future of you children, accept it you must.

For example:
It has been asked of your liberal and progressive politicians over and over; “what gun control law could they conceive of or enact that would prevent terrorists, criminals or psychos from getting and using firearms?”

All of us on the side of actual common sense, not the mangled, dishonest and distorted common sense espoused by the left, understand full well that there is no such law and so such ability.  The dirty little secret is, your faux leaders know it too.  It is you, the everyday Democratic voter who is not supposed to be so enlightened.

Those leftists in government who would like very much to disarm  law abiding citizens, which encompasses not just Republicans and conservatives but everyone not in the position of government power and elitism. By the way, the disarmed includes you, their so called constituents.  Their agenda has nothing to do with the safety of the public.  It formulates around their own safety and the impotency of the people. Again that includes you. Their never-ending quest for unchallenged power can’t continue without you.  Gun control is simply “people control”.  If you do not believe this please take several hours and review the death and mayhem tyrannical governments (mostly leftists) around the world have levied upon their unarmed citizens.

That is why your politicians will never attempt to answer the question we asked above.  But instead they will offer up the standard fare that seems to have worked on the huge majority of their mind numbed followers. Followers, like you, who willingly and obediently allow themselves to be placed in danger under the fraudulent concept of common sense gun control.   The answer they always give, in lieu of actually addressing the question, is this.  “Even if one life is saved because of common sense gun laws, that should be all the reason caring people should need. Who, after all could disagree with saving a life?””

All of us have witnessed the deployment of this idiotic policy and most of us continue to be astounded by those ignorant and compliant lemmings who never seem to lose the hunger to eat up every devious word of it.  The hope for America lies in the need for good, honest, hardworking Democrats, like you, to take notice and then take flight from a party which no longer believes America should be great and free.

Remember your party now advocates the dismantling of your Constitution in an effort to save “just one life”.   The same Constitution for which hundreds of thousands of our relatives and ancestors have died to preserve for us.

Your leaders can sit idly by while untested vaccines kill and disable tens of thousands our children every year, while car and truck accidents kill and maim hundreds of thousands of people, fifty thousand or more people die each year as result of errors in prescription drugs, another 50 thousand expire on the operating table as a result of doctor error or incompetency.  Lastly they ignore the barbarous acts of late term abortion where viable children are ripped from the womb on a daily basis.  Do you really believe they are concerned about saving “just one life”?

If your leftist politicians were actually compassion inspired activists, the very few people, by comparison, who are killed by legally owned firearms, should not even register on their heart string meter.  But legal gun ownership is in their sights.  It is long past the time when you, a constituent, should ask why.  They won’t tell you. But we will.

Every mass killing in this country, let me repeat that, every mass killing has been perpetrated in so called gun free zones.  The logical next question should be; how many lives could have been saved if someone other than the murderers had weapons?  Of course, that answer could never be known to an exact number, but no one could for one second, deny that the number would be huge.  That translates to a large number of fathers and mothers, brothers and sisters, who would be home now with their families instead of residing in their local cemetery.

Therefore the save just one life concept of gun control totally and logically falls apart.  The deaths of countless unarmed citizens having been slaughtered by armed psychos far and away outnumber the fanciful suggestion that more gun control saves lives.  Again your leftist leadership knows this.  That is why, when they talk about deaths by legal guns, they always include suicides. They couldn’t possibly be trying to mislead you, could they?

Your party displays compassion for the lives of the innocent, which we have proven is a disingenuous ploy.  There must then be disseminated, from a different origin, their true purpose.  The blue collar, hardworking, law abiding Democrats, just like you, have been taken in by the progressive leadership. This past weekend’s slaughter of many innocent and governmentally unarmed people should awaken many of you.

They are using your ignorance and your concern for safety, to provide cover for themselves.  Remember, those ridiculous policies have put every one of you at risk while their safety and security abounds.  Quite the public servants. Yes?

As you assess these facts you must understand that not one of those who profess to care about you will shed one tear if you or a loved one dies as a result of “common sense” infringements upon your right to protect yourself.  That is, unless there happens to be a camera rolling.

The bottom line is this; your socialist leaders will never tell you how they intend to prevent psychos from getting their hands on any type of weapon they decide to use against you. Why? Simply because there is none.  They know it and deep down you know it too.  Your Democratic leaders can and will take steps, as long as you allow it, to assure any mass murderer you are unfortunate enough to come in contact with, will find you unarmed.

As this government continues to import potential Islamic terrorists, by the tens of thousands, your leaders are working night and day to make sure you will not have the ability to defend your family against them.  If this makes sense to you, God help us all.