While assembling research for a new project, The Post & Email found on Friday that the article is no longer available at The Times.

By using search terms found in the article, it appears that it has also been removed from the AP’s website.

Other outlets which published the story produce an error message as of this writing, although Yahoo! News continues to post the story.  The article also continues to appear at the Albany, NY-based Times-Union with a byline of Travis Loller.

The report provided insight as to why a privately-run prison in Trousdale County, TN which opened in January stopped accepting new inmates approximately two weeks earlier.  Through public records requests, the Associated Press was able to obtain a report written in mid-March by a Tennessee Department of Correction (TDOC) official revealing that “the guards were not in control of the housing units, were not counting inmates correctly and were putting inmates in solitary confinement for no documented reason” at TTCC.

The excessive use of force was also reported as gleaned from a video appearing to show a correction officer using pepper spray on an inmate when the inmate was following directions.

TTCC and three other Tennessee prisons are owned and operated by Corrections Corporation of America (CCA), the nation’s largest private prison contracting company.  CCA spokesman has denied to the AP that TTCC is understaffed and chosen not to answer questions from The Post & Email.

The AP’s report was published at the same time that various media were conveying similar findings gleaned from visitors to the prison.

Visitors have told us that the guards have launched a competition between pods which is causing rising tensions among already-stressed inmates who are not receiving meals and medications on a timely basis.

Several reports state that the inmates’ food comes from containers marked “Not for human consumption.”  Another visitor reported that there have been nine inmate deaths at TTCC since the facility opened which have not been explained or publicized.

In addition to the AP, NBC News published a detailed article about not only the conditions at TTCC, but also state-run Tennessee prisons, particularly West Tennessee State Penitentiary (WTSP), which has seen a high level of violence.

On May 26, The Tennessean reported that a correction officer was assaulted by an inmate and that “For weeks family members with loved ones at Trousdale have sent messages to The Tennessean arguing the facility is not safe.”

After discovering the article missing first at The New York Times, The Post & Email contacted the newspaper to ask why. 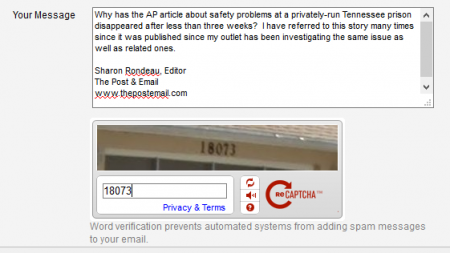 and received an acknowledgement:

but no response as of press time.

We also sent an email to the Associated Press:

Why was an AP article written by Travis Loller published on May 24, 2016 at The New York Times and at AP websites removed?

But the article can still be found here:

The Post & Email will report if and when a response is received.

We have printed the article for reference in case it disappears completely from the web.

Update, 9:53 p.m. EDT:  Minutes after publication at approximately 9:50 p.m. EDT on Friday, the AP issued an acknowledgement of our inquiry which reads:

Thank you for contacting Customer Support regarding your AP Service.

For your reference, Case ID 00954692 has been assigned to your inquiry.

The message then reiterated our question verbatim.

Why Has the AP Pulled its Article on Private Prison Problems? added on Friday, June 10, 2016