“PRISON, NOT THE WHITE HOUSE” 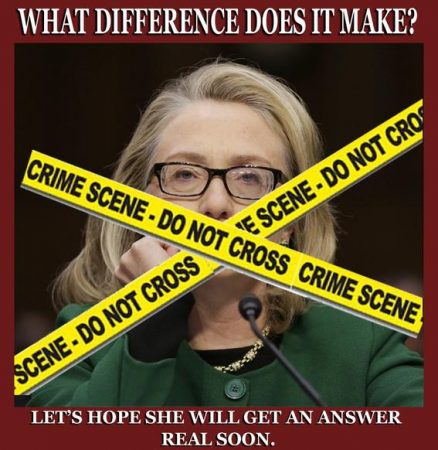 (Jun. 9, 2016) — There are many adjectives that describe the Democratic presidential front-runner, but few are complimentary or indicate that she is capable of running this country- and those that are, are stunningly mistaken.  For instance, some will claim that she is well-qualified, thinking that the years she spent throughout her career have prepared her for the job. Having been given extraordinary opportunities, Mrs. Clinton has not had any accomplishments. In reality, prison – not the White House – is the only facility Mrs. Clinton has proven she is well-qualified to occupy.  From early in her career on the Watergate Commission when she was fired for lying to the time she left the White House and took the china and other valuables with her; to her time as Secretary of State when her criminal negligence resulted in the death of four Americans; to her reckless endangerment of the security of our entire country resulting from her email choices; to her suspected quid pro quo Clinton Foundation follies, Mrs. Clinton has proven to be heartless, reckless, and corrupt.  Not only should her prior actions disqualify her from running for this office, they should disqualify her from living a life outside of prison walls.

While we wait with baited breath for the FBI to levy criminal charges against this presidential hopeful, there may be another course of action that could replace her pantsuit wardrobe with orange jumpsuits.  Mrs. Clinton should be charged with Reckless Endangerment by the families of the Benghazi victims. They certainly have legal standing. The criteria for launching such a charge against a public official depends on the official being forewarned and aware of the existing danger.  In law it is called “Notice of Claim.”  It has been well-documented that Ambassador Stevens alerted Mrs. Clinton about the dangers in Benghazi on many occasions, all of which were ignored by the woman who wants to be responsible for the safety of all Americans.  Whether or not the FBI acts, the families of the Benghazi victims can and should.

Aside from Mrs. Clinton’s past professional failures, she has made it clear that if elected, she would do everything within her power – or whatever she could get away with outside of her power – to abolish our Second Amendment rights.  This can be accomplished by simply appointing Progressive Supreme Court justices that believe our Constitution is a living document and should reflect our evolved Darwinian state of humanity.  And as many Conservatives understand, the Second Amendment is the one thing that protects all our other constitutional and civil rights.  Therefore, the only thing that may be standing in the way of totally corrupt and tyrannical government overreach is our right to keep and bear arms.

In order to protect our Second Amendment rights, we need to do everything within our power to prevent Mrs. Clinton and her kind from residing in the White House.  Additionally, we should be encouraging the families of the Benghazi victims to sue Mrs. Clinton for Reckless Endangerment, as well as Criminal Negligence.  But still, there is more I believe we can do that doesn’t rely on the decisions of progressive and ideological judges.  If you have been denied a right-to-carry firearms license, then write to your state and federal representative as well as any judge who may have been involved in the denial, informing them that as a result of this denial, you have been placed in a dangerous situation where you cannot defend yourself adequately against any terrorist or criminal assault that may come your way.  This will serve as a Notice of Claim and insure that you or your surviving family have the right to bring a legal claim against them should you find yourself in such a situation.  But it will do a whole lot more than that. It can scare the living daylights out of them and send a shockwave throughout the rest of the country as well. Now that’s what I call “political pressure.”

You see, despite using a myriad of strategies to preserve our Constitutional Republic, our Constitutional Republic has continued to decay.  Many of us have believed we can do this if we just manage to elect the right representative into a government position, but with each successful election has come disappointment after disappointment.  Then, of course, there are the more intellectual among us who have instituted well-researched and well-documented lawsuits.  They, too, have either had their lawsuits dismissed in unethical manners or have received judicial decisions that are both disappointing and unconstitutional.

Should the families of the Benghazi victims launch such a lawsuit, and should all Americans who have been unconstitutionally denied their right to carry firearms send a Notice of Claim to all officials involved, then we can begin to apply the political pressure necessary to “persuade” our elected officials to restore every jot and title of our Second Amendment rights.  We must hold all of our representatives and judges to Constitutional purity or we lose every right the Constitution protects.  Let’s start doing that today.  If you have been denied the right to carry, quickly jot down a letter to the person involved in the denial letting them know their recklessness in denying you of your constitutionally-protected rights and has therefore created a dangerous situation.  And also let them know that the letter you are writing will serve as your Notice of Claim to them regarding the danger they have ignored and will also serve as the basis for you or your survivors to institute a lawsuit against them.  And this is what I believe can be the beginning of beneficially and appropriately using political pressure in addition to the election ballot.