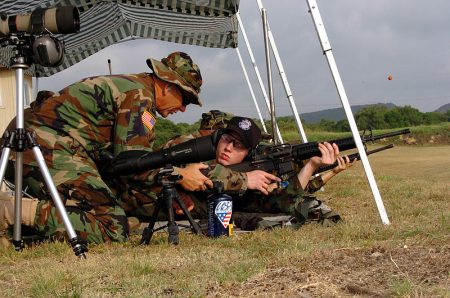 Curtain rises on a stage that looks like the middle of nowhere. There’s a 6’ metal fence running from front stage right to rear stage left. In the middle is a gate. The ground is sand and there are giant boulders here and there. The backdrop is more of the same extending to infinity. The sky is of dusk. There are two young American soldiers, rifles hanging by straps from their shoulders, near the gate aimlessly walking around. Once in a while they’ll look off through the fence.

“Exotic? Exotic is somewhere there’s a poster of. Ever see a poster of this garbage dump? You know why they don’t have landfills in Muslim countries? Because the whole country is a landfill, that’s why. Have you ever, just once, seen a garbage truck in this ‘exotic’ location?”

“Can’t say that I have, but then again, the absence of not seeing a garbage truck doesn’t mean there aren’t any.”

“Oh, no, you don’t. You’re not going to give me any of that WMD speech again. Look, this is all wrong. It’s like Vietnam all over again, but worse. Back then all they had to worry about was the enemy and the Pentagon. Nowadays we have to worry about the enemy, the Pentagon, the press, the Congress and even the Commander-in-Chief. As I said at the beginning, I don’t like it one bit.”

“Your making too much of it, that’s all it is. Take it easy. Relax. Have fun.”

“Fun? Did you say ‘have fun’? What’s wrong with your nose? Is you nose broken? You can’t smell it? It smells like we’re in the middle of a garbage dump, a dirty, rotten garbage dump, and every once in a while some lowlife rat sticks his head up and takes a potshot at us or plants ordinance in the road that everyone knows about but us. Heck, some of that stuff has been there for weeks – they all know it’s there – and then we come along and KABAM! Somebody just lost his legs.”

“The food is good. You get to have your picture in your hometown newspaper once in a while. Heck, you’re a celebrity back home.”

“A fool is more like it. We’re ignored. We’re just like those Christians getting murdered every day over here. They just can’t shoot them in the back of the head, can they? They have to crucify them; make them suffer. What’s wrong with these people, anyway? How’d they get to be so far out of, I don’t know, balance? Kilter? Removed from civilized society? They sure are messed-up, is all I got to say.”

“For once you’re making sense. They sure are a messed-up people, that’s for sure.”

“That’s right, they are. And they don’t change their stripes, do they?”

“No, they don’t. Just because they move to Germany or Sweden, they still act the same. They still live like pigs. Remember when we were in Marseilles and they said to keep away from the Arab section?”

“Yeah, I remember. And you asked if there were any signs and they said to stay away from any area that stinks, you remember that?”

“I remember. And they were right. At first I didn’t believe them, and then we got a whiff.”

“And you almost barfed.”

“Well, answer me this, then. If these people don’t change their stripes, that means they’ll continue do their ‘honor killings’ and other stuff, just like they do in their homeland, right?”

“Well, then, how come people think that they’ll all of a sudden embrace democracy, the Constitution and the American Way the minute they step off the plane in New York, Chicago or Atlanta?”

“Now that IS a mystery, isn’t it? I don’t know. All I can say it doesn’t make any sense not to think otherwise. I don’t know. They’re stupid?”

“Well, that’s the end result, isn’t it? I think they want to see themselves as ‘do-gooders.’ Makes them feel self-important, somehow, even though they’re wrong.”

“How do you think the Jewish father felt when he finally realized that the rumors of the Death Camps were true and it was too late to get his family out? It was world news when Einstein left Germany. Everyone knew that he was a Jew fleeing the repressive regime of the madman Hitler and his National Socialism (NAZI) Party.”

“And Niels Bohr escaped from Holland. So if we have Muslims in American they’ll be no place to run to, is that what your saying?”

“Give the soldier boy a cigar.”

“What about these Rules of Engagement?”

“Proof the Pentagon, via the Joint Chiefs of Staff, are working in cahoots with the Muslim Brotherhood that’s been entrenched in the White House for the past seven years, the very people we’re supposed to be fighting over here.”

“Which is why they’re winning.”

“Then how do we get out of here alive?”

“You got to switch to ‘survival mode;’ that’s the key. Look, here comes the Sergeant of the Guard with our reliefs. Let’s grab some chow and cut some well deserved Z’s.”

The men walk off whistling the “Bright Side of Life” by Monty Python.