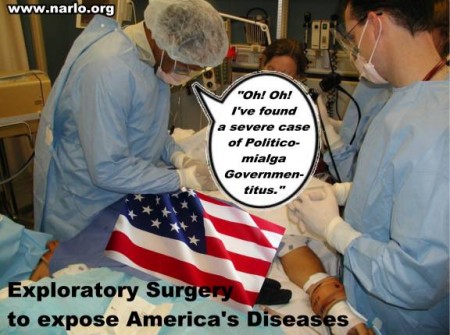 Sure!  Life is great in America.  In fact, America today is probably a better place to live than any other nation on earth, relatively speaking.  People are not flooding into Mexico from America.  They are flooding into America from everywhere on the planet because of what we have and are able to do here.  Some are even coming here to do us harm.  But what appears on the surface as a paradise to others from other countries masks the underlying problems that America faces that can and will destroy her from within.

Several years ago a close relative was suffering from esophageal cancer.  He had all the normal cancer treatments of chemotherapy and radiation and appeared to be getting better.  But what was going on, on the surface, masked what was going on inside his body.  All of a sudden he started getting progressively worse and when normal treatments didn’t work and scans produced no evidence of cancer, the doctors were forced to conduct exploratory surgery on him to find the cause of his continuing deteriorating condition.  When they opened him up, they found tiny pockets of cancer riddled throughout his body, but the pockets were so small, they did not appear on the usual scans.  He died within a few days after the exploratory surgery as his organs shut down from the rapidly metastasizing disease.

Yes, there have been numerous minor exploratory surgeries done on America’s “organs” to determine the nature of the diseases that plague “her,” but so far any cure is politically, culturally, or financially improbable because of all those things that divide us.

One of the worst diseases facing America today is “Politicomialga Governmentitis.”  People believing in the liberal ideology seem to be much more susceptible to the disease.  “Politicomialga Governmentitus” is slow-acting and an always-fatal disease and is caused by a cultural malaise known as “Indigenous Apathetico Neuronomiasis.”  “Indigenous Apathetico Neuronomiasis” causes people to ignore what government is doing and motivates them to depend on government rather than depend on themselves or each other.  People living in densely-populated urban areas, where dependency becomes the norm rather than the exception, exacerbates the condition.  The condition diminishes as the people are spread out and there are greater spaces between individual domiciles, where air-borne or direct contact infection of these diseases is less likely.

But government doesn’t want you spread out.  They want you crammed into big cities where you will be more easily controlled and become dependent on government, thereby influencing you to vote for those politicians “feeding” your dependency.  Self-reliance and independence have become passé, frowned upon, penalized and taxed.  Governments don’t like self-reliant, independent people because independent people tend to start revolutions when governments turn to tyranny.

Your entire life is being totally altered by the disease of “Politicomialga Governmentitus.”  Here’s how.  We attended a conference of real estate folks several years ago in which a bunch of big-city, over-educated planners were extolling the virtues of their profession; namely, intensely-planned, high-density urban cities with mass transit.  At the end of their speeches we asked them if they were aware of the study of rats versus density and what happens to the rats as densities are increased.  We knew that the studies showed that higher densities produced hostile behavior, infanticide, suicide and cannibalism in the rats.  The greater the density of rats in the rat colony, the worse the behavior.  One of the planners responded that he was aware of the studies but he said the studies were flawed.  We asked him why and he responded with, “Because they didn’t give the rats parks.”  His answer was not designed to be flippant.  He was dead serious.

The dream of owning a single-family home on a large lot in a suburban area where more space is available to move about and have a sense of ownership and freedom has been dashed by the irrational mandates of radical environmentalism and the insanity of social justice.  These two conditions are a sub-disease of “Politicomialga Governmentitis.”

The next most fatal disease is “Multi-cultural, Tissue-dissolving Meningitis.”  This disease eats away at the cultural base of the original indigenous population and the culture that built up around that population.  Cultural merging, where there are vast differences in the cultures, produces endless conflict and strife that leads to violence and eventually breaks down the fibers of that original harmonious culture to a condition known as “irreversible chaos.”  Inner cities like Chicago and the Black Lives Matter movement are symptoms of this disease.  Thrusting widely-diverse cultures on the American population from the Middle East and Central and South America by the American government will eventually lead to “irreversible chaos.”

Europe is facing “Multi-cultural, Tissue-dissolving Meningitis” today, and their European culture is evaporating before our eyes.  Financial collapse, violence and eventually civil war are surely to be the outcome.  America will suffer the same fate if it follows in the path of Europe, which it seems determined to do with open borders and massive immigration of undesirables, not to mention Islamic terrorists.  When illegal aliens from Mexico can raise a Mexican flag at a Trump protest rally, the disease of “Multi-cultural, Tissue-dissolving Meningitis” has already metastasized.

Then there is another offshoot of “Politicomialga Governmentitus” known as “Publicus Edu-irrational Propakandaphilia.”  This sub-disease eats away at the rational mind of children and replaces logic, reason, intellect and truth, making the children highly susceptible to a curriculum of myths, legends and lies.  This purposely-distorted curriculum is designed to serve national or international governments, or special interest agendas, like radical environmentalism, man-caused global warming, multi-culturalism, social justice, political correctness, or the one-world-order.  Allowing this disease to exist in the general population for generations without a cure, can lead to “Robotitis” and mind-numbing, irrational compliance to group or government demands.  This disease kills the survival mandate of the will to resist or the motivation to question authority.  Hitler inserted the effective components of this disease into the German water supply, thereby rendering the entire German population numb to massive human genocide.

And let’s not forget that infamous but not fatal disease of “Entertainimous Retinalosis” which results in an obsessive desire to live vicariously in the exploits, questionable accomplishments and dirty and many-times violent deeds of ne’er-do-wells, freeloaders and miscreants that appear on a two-dimensional, inanimate screen, resulting in the absorption of many hours of brainwashing and mind-numbing, nefarious triviality every single day.  This debilitating disease can trigger that other malady we described earlier as “Indigenous Apathetico Neuronomiasis.”

We would be derelict if we did not mention the brain disease of “Voteranimous Ignoramous Stupideo, Mental Dimnorosous.” This disease causes people to believe that their vote for any political candidate, president or otherwise, will immediately cure the disease of “Politicomialga Governmentitis.”

So you can see, ladies and gentlemen, as you sit around the dinner table at night, enjoying the fruits of your labor, in the company of family, harmonious or otherwise, your America is being eaten alive from the inside by diseases most people never thought of or heard of before, or even named.  These diseases are attacking the vital organs of a free nation of individuals from within, where those who should be able to see those diseases can’t because they are blind to reality or choose to ignore reality because they have been infected with the  “Entertainimous Retinalosis” disease.  That blindness renders them oblivious to the internal damage going on inside the “body,” and one day, highly intrusive, possibly lethal, exploratory surgery will have to be conducted to see if it is possible to kill the thousands of little pockets of “Politicomialga Governmentitus” that are dissolving and devouring the very life blood of America.

The truth is, the disease of “Politicomialga Governmentitus” is sitting at your diner table right now.  The disease is influencing what you eat, what you wear, how much you earn, where you live, where you work, how much electricity and water you use, what garbage you can throw out, what kind of energy you will have to use, where you keep your money, how much your money is worth and what you do with your money.  It is governing your health care, controlling your land, brainwashing your children and it is wasting your money by the billions through waste, fraud, abuse and corruption.  This infectious disease has become arrogant, abusive, dictatorial, and treats your individual, unalienable rights with dispassionate, cold-blooded disdain.

Contrary to some optimists who still believe America’s best days are ahead of her, the body of America is slowly dying from internal, metastasizing diseases, and without positive intervention, or a miraculous cure, she will die a horrible, gut-wrenching death in revolution, civil war, or abject slavery.

Sure!  Life is great in America for now.  That is, if you don’t look too closely and you aren’t “ready to see what really exists on the other side, what exists behind the blinds and under the skin, and taste all the ugly fruit instead of all that looks right, plump and ripe.”   You can’t cure a disease you can’t see or whose existence you refuse to acknowledge.

There are many good things about America and yes, there are agencies of the government that work tirelessly to protect us from foreign enemies.  But all the good things of America will cease to have any meaning, substance, or effect if “her” vital organs are infected with fatal diseases.

Of course, all of what we have written here is satire.  Sadly, most of the readers will toss this off as just another article by another one of the thousands of conservative authors who erroneously think they are making a difference in curing America’s multitude of mostly liberal-ideological-caused diseases.  In contrast, at least we are actually doing something about coming up with a prescription to limit the effects of those diseases and not just “talking” about them.

For those of you who don’t toss this article off as more conservative fluff, and if you are one of those individuals that have no intention of giving up or giving in without a fight and have found yourself infected with the disease of “Politicomialga Governmentitus” and would like to entertain a prescription for that disease, you might consider checking out the prescription we have developed HERE.

ON THIS MEMORIAL DAY: Let us conclude on this Memorial Day weekend by saluting all those who have, or are still wearing the uniform of the United States of America and those who gave their lives, their limbs, or their minds so that we can live in the land of the free and the brave. Let us not let their sacrifice be in vain by refusing to defend the principles and foundation of liberty, right here at home. We owe them and future generations no less.

The Diseases That Have Infected America’s Vital Organs added on Sunday, May 29, 2016