WILL THE TRUTH EVER BE KNOWN? 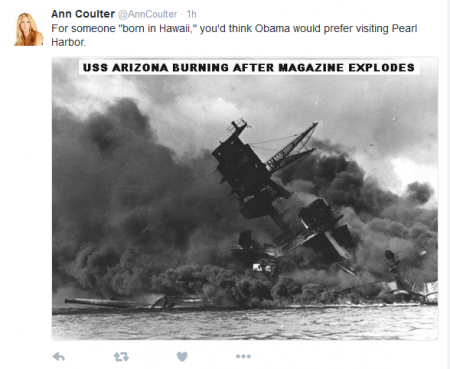 (May 27, 2016) — On Twitter on Friday, commentator and author Ann Coulter tweeted a photo of the December 7, 1941 Japanese attack on Pearl Harbor, HI which destroyed the USS Arizona along with 1, 1,177 sailors and U.S. Marines.

Some survived the attack to tell of the fateful attack that day by the Imperial Japanese Navy.

Coulter accompanied the photo with the comment, “For someone ‘born in Hawaii,’ you’d think Obama would prefer visiting Pearl Harbor” in an apparent response to Barack Hussein Obama’s trip to Japan not only for the G7 Summit, but also to visit the Hiroshima Peace Memorial Park with Japanese Prime Minister Shinzo Abe to commemorate the dropping of the first atomic bombs in August 1945 to end World War II.

During an address at the park, Obama spoke, calling for “peace and nuclear disarmament.”

The White House has said that Obama’s visit to the memorial did not constitute “an apology” for the United States’s bombing of Hiroshima and Nagasaki on August 6 and 9, 1945, respectively.

During the war, Japan, Germany and Italy were known as the “Axis Powers,” while the U.S. and Europe were the “Allied” nations seeking to stop Adolf Hitler‘s march toward world domination.

On May 11, Reuters quoted Obama’s deputy national security adviser, Ben Rhodes, as having said that while on his trip to Vietnam and Japan, “Obama will ‘highlight his continued commitment to pursuing the peace and security of a world without nuclear weapons.'”

Just days before, Rhodes was sharply criticized for his alleged purposeful deceiving of the Washington media corps on Obama’s “Iran nuclear deal” as related in a New York Times Magazine article by David Samuels.

Obama’s remarks at the Hiroshima Memorial included the following:

Mere words cannot give voice to such suffering, but we have a shared responsibility to look directly into the eye of history and ask what we must do differently to curb such suffering again.

When asked during a May 10 interview if she were “surprised” by Obama’s plans to visit Hiroshima, Dartmouth College Associate Professor of Government Jennifer Lind told NPR host Ari Shapiro:

I am and I am not. I’m a bit surprised because it is a risky move in the middle of a presidential campaign when the risk of losing has such consequences (laughter). And at the same time, I’m not surprised given what we know of President Obama. We know from these speeches, such as Strausberg and Cairo and elsewhere, that he ruminates about America’s past behavior. And so in that respect it does seem like a natural thing for him to do.

Coulter also tweeted during the same time frame on Friday:

Coulter’s comments may have been prompted by Memorial Day on Monday, which has been recognized as a national day of mourning America’s war dead since 1866. As noted in Obama’s Memorial Day proclamation this year, Congress has passed two statutes since 1950 designating Memorial Day “as a day of prayer for permanent peace” as well as honoring those who made the ultimate sacrifice.

Obama claims to have been born in Honolulu, HI on August 4, 1961; whether or not he ever visited the USS Arizona Memorial as a child or young adult is unclear.  As Oval Office occupant, he visited on December 29, 2011 while on his Christmas vacation and in 2008, according to CNN.

In her tweet depicting the sinking of the ship on that fateful day, Coulter placed the words “born in Hawaii” in quotes in an apparent reference to the persistent doubts surrounding Obama’s origins stemming from the unwillingness or inability of any Hawaii hospital to claim to be the place of his birth.  Additionally, conflicting life stories have been presented by the Associated Press, UPI, MSNBC, NPR and other news outlets, some of which reported Obama as having been “born in Kenya” or “born in Indonesia.” There is also the matter of the declared forgery of the long-form birth certificate image posted on the White House website in April 2011 after Donald Trump applied public pressure for several months, calling into question Obama’s constitutional eligibility to serve as president.

In 1991, Obama’s then-literary agent published a promotional booklet stating that he was “born in Kenya and raised in Indonesia.”  The biography was mysteriously changed in April 2007, two months after Obama declared his presidential candidacy, to say that he was “born in Hawaii.”

In March 2012, after approximately six months of analysis, the Maricopa County Cold Case Posse stated at a formal press conference that the long-form birth certificate image released by the White House is a “computer-generated forgery,” along with Obama’s purported Selective Service registration form.  A follow-up presser in July of that year revealed more details about the team’s conclusions but oddly did not generate curiosity from the media or a congressional investigation.

Selective Service System Director Lawrence Romo declined to release a certified copy or to allow inspection of any of Obama’s documentation which might be held by the agency.  On the day of the birth certificate image’s release on the internet, the White House termed the controversy over Obama’s birthplace and eligibility “a fake issue.”

CNN, which has arguably issued deceptive reporting about the microfilm purported to contain Obama’s birth record, has accused Trump of promulgating “conspiracy theories,” including on the subject of Obama’s birth certificate and nativity story.

Coulter endorsed Trump for president months ago and has spoken out previously about the doubts surrounding Obama’s birthplace.  At a Trump event in February, addressing the crowd prior to Trump’s arrival, Coulter stated that there is “a ‘whole list of politically-incorrect words you’re never supposed to use,'” including that of “natural born Citizen,” a requirement appearing in Article II, Section 1, clause 5 of the Constitution solely for the chief executive.

On Thursday, The Post & Email speculated that after stating that world leaders are “rattled” by Trump’s popularity in the Republican primaries, Obama might himself be “rattled” by the prospect of a Trump presidency given that Trump had publicly raised the issue in 2011 and that if elected, he could direct the U.S. Department of Justice to open an investigation into the forgeries.

Ann Coulter Comments on Obama’s “Born in Hawaii” Claim added on Friday, May 27, 2016