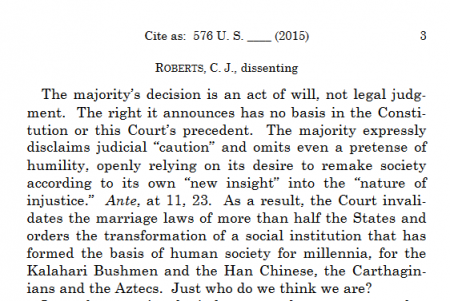 (May 26, 2016) — That this great Republic was founded in the name of the Creator, there is no doubt. Every one of the signers of our Constitution adhered to our Judeo-Christian ethos (Online Etymology Dictionary, ©2010 Douglas Harper).

The mere suggestion that we, as a nation, recognize that abomination, “same-sex marriage,” which we have had forced upon us by a corrupt, ungodly and carnal president and a complicit judiciary would have been sufficient to condemn those responsible and complicit to the gallows for the crimes of homosexuality and heresy.

Our Puritan forebears were correct in their Biblical readings and unequivocal interpretation of the Scriptures. They would and could have quoted verbatim those scriptures pertinent to “same-sex marriage.” Furthermore, the learned among them would have labeled such a term exactly as the title of this piece, a “carnal non-sequitur,” meaning, “A filthy inference that illogically follows a faulty premise.”

The Holy Bible is remarkably but predictably clear on the subject of marriage as it is on homosexuality. “So God created man in His own image; in the image of God He created him; male and female He created them.” — Genesis 1:27 (NKJV)  “The image of God is both male and female and is reflected in a godly union between male and female where the creative power of God, His life-giving, His self-giving and His moral nature are perfectly expressed. This is only possible in a heterosexual union.” (Ibid)

The partner God created for Adam was not another man; it was a woman, the natural complement to man to facilitate procreation, impossible in a homosexual relationship and therefore “unnatural.” Both then stood naked and unashamed before God because they were yet without sin.

Furthermore, God condemned homosexual unions as did Jesus, as was written in 1 Corinthians 6:9-10 (NKJV): “Do you not know that the unrighteous will not inherit the kingdom of God? ”Do not be deceived. Neither fornicators, nor idolaters, nor adulterers, nor homosexuals, nor sodomites, nor thieves, nor covetous, nor drunkards, nor revilers, nor extortioners will inherit the kingdom of God.” This was further amplified in 1 Timothy 1:9-10 (NKJV):  “Knowing this: that the law is not made for a righteous person, but for the lawless and insubordinate, for the ungodly and for sinners, for the unholy and profane, for murderers of fathers and murderers of mothers, for manslayers, for fornicators, for sodomites, for kidnappers, for liars, for perjurers, and if there is any other thing that is contrary to sound doctrine.”

Lust, perversion, unconsecrated love and procreation are all self-deceiving.  Regardless of who legislates that which is a sin in the eyes of God and the court that puts its imprimatur upon a “marriage” between members of the same sex are guilty of conspiratorial sin. A self-serving, perverted leader and cockalorum MUST be taught to “heel” by his masters and follow their dictates and those of our Benevolent Creator.