(May 23, 2016) — On Sunday, The Post & Email began to report first-hand accounts of living conditions, visitation, staffing, medical care and other issues shared with us by visitors to the Trousdale Turner Correctional Center (TTCC), a facility operated by Corrections Corporation of America (CCA) located in Hartsville, TN.

The eyewitnesses contacted us as a result of two articles we published last week in which we related an inmate’s observations of understaffing and the consequence of having to spend virtually all of his time in his cell, despite his designation as minimum security before his recent arrival at TTCC.

Our attempt to reach CCA media representative Jonathan Burns for comment was first acknowledged but then ignored after we fulfilled his request for a list of specific questions.

On April 30, WSMV in Nashville published an article reporting that relatives of inmates arriving for visits during scheduled hours have cited understaffing as the cause of wait times lasting up to five hours after making long trips to reach the facility.

On Sunday, The Post & Email spoke with Bridget Thweatt, who is heavily quoted in WSMV’s article.  Thweat told us that she has communicated with other media as well and that her husband, who is an inmate with severe medical complications, was retaliated against because of it by an unexpected relocation to another prison in the middle of the night.

Another woman quoted in the article, Nikki Gardner, with whom we have not yet spoken, said that the CCA facility’s policies have not been made public.  When The Post & Email submitted its list of six questions, we inquired as to whether or not there was a corporate handbook with policies and guidelines for inmates and staff as is published by the Tennessee Department of Correction (TDOC) for the prisons it operates.

“They just shipped him to Whitesville out of retaliation,” Thweatt said.  Shen then related that she had contacted a Trousdale County official to ask, “How did you let a private prison come in here?  Were the property taxes such a great asset to you that now your taxpayers are unaware that they’re paying for guards that are coming from the state of Mississippi, Florida, California…they’re coming in from everywhere to try to run these CCAs.  And we’re paying their housing, car rentals…this is not getting out, because if you don’t get something put out in front of you, you don’t think about it.”

“If Tennessee taxpayers were really aware of this, I don’t think they’d stand for it,” she added.  “If you don’t have a loved one in this prison system, you don’t understand how it works.”

Regarding the recent retaliation she reported, Thweatt said, “I have a paper trail.  I’ve had the managing director of CCA contact me.  I have had the administrator over wardens in the TDOC contact me.  They said they were willing to meet with me to address my concerns.”

If you’ll allow me to tell you a brief part of this, my husband in 2013, being incarcerated under the State of Tennessee, had to have neck/spine surgery.  He had cadaver bones disintegrate in his neck, causing a septic infection.  The State of Tennessee did not follow up with his medical care and take him for follow-up care with the doctors.

He ended up with five back-to-back surgeries, on life support, because they failed to do his medical care.  So now, he is back in bad shape.  I went to see him today.  He can’t sleep because he has uncontrollable jerking in the left arm; he’s in chronic pain. I’ve been fighting now for two years to get him to a doctor and they have yet to do it.

He has Hepatitis C, he has a history of seizures and has one lung.

[Editor’s Note:  On May 8, The Tennessean’s Dave Boucher reported that “nearly 3,500” inmates in the state’s prisons affected by Hepatitis C are not receiving treatment for the disease which was said by TDOC’s medical contractor to have reached “epidemic” levels last summer.]

I have every email where I have emailed state representatives on the criminal justice board, and I complained that they are locked down 90% of the time. It’s not due to disciplinary action; it’s due to being understaffed and they can’t run the prison.

They’re not getting their showers; they’re getting fed cold food on styrofoam trays in their cells.  They’re not even able to go to the chow hall.  It’s a mess.  CCA needs to be done with; the private prisons need to go.

At this point, The Post & Email pointed to its having asked in its initial article whether or not a private company could run a superior operation to that of a state, in this case, Tennessee, to which Thweatt responded:

No, because they’re looking for a big profit, and they’re going to protect that money, as a big corporation does.  They’re breaking their Eighth Amendment right to medical treatment; their civil rights are being broken right and left.  If you visit these men in these prisons, they look like death warmed over because they’re so malnourished.

Regarding her report to WSMV, Thweat told us:

We were allowed to go in at 7:30 in the morning to start signing in, because it gets very crowded very quick.  Trousdale County built a facility that houses 2,500 inmates.  Being understaffed, they can’t get the process down to get you through there.  They’ll send a memo out; they’ll pull it back. 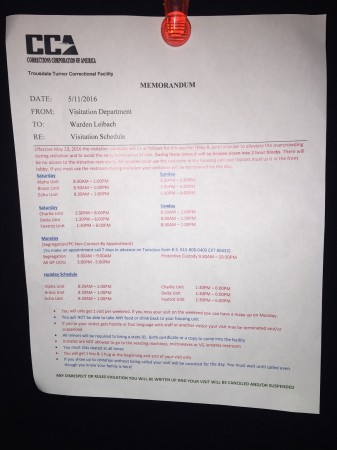 The bottom of the letter read, in part, “You will get 1 kiss & 1 hug at the beginning and end of your visit only”.

I have a copy of a letter my husband personally wrote telling what was going on on the inside, and he’s willing to speak to anybody from the media, but they have what’s called a ‘media blackout’ and are not letting anybody talk to him. 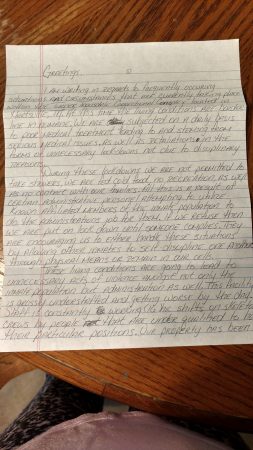 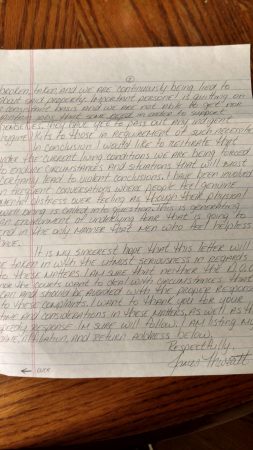 The administrative warden of the TDOC is the one who’s telling the CCA prison, “I approved four-hour visits, and you’re going to have to give these people four-hour visits,” because most people like me drive 3+ hours to go visit, and we’re told after two hours the visit’s over.

CCA has covered up a recent death at Trousdale.  From what we understand, the man had pneumonia, and they got him medical help too late.  Therefore he died, and he had six months and he was getting out.

The CCA is in breach of contracts, too, because it says on their site that they offer adult education, job training, computer skills.  But they don’t, because they have no one there to teach them.

The Post & Email noted in its earlier reportage that there are more than a dozen position openings at Hartsville and directed one of its questions to Burns as to whether or not the positions were in the process of being filled.

The Hartsville Vidette, the area’s local newspaper, has reported on the contract signed between county commissioners and CCA as well as the impending opening of the prison late last year.  Thweat told us that at a March meeting of Trousdale County Commissioners, she and other inmates’ relatives were told that the “turnover” TTCC is experiencing is “normal.”

The minutes of the meeting are here.

Despite public assurances, Thweatt told us, “They told us when our relatives were the first ones going in that they were not ready for them but that [TDOC] Commissioner Schofield ‘forced this issue.'”

Thweatt described Schofield as “an old football buddy” of Tennessee Gov. Bill Haslam and someone who was fired from the Georgia Department of Corrections, where Schofield formerly worked.

“Not only is there my husband, but there are several men willing to tell their stories on this,” Thweat said, adding, however, that, “Trousdale is blocking mail because they know that we’re telling.”

Thweatt’s husband was moved to Whiteville, another CCA facility.  While the TDOC lists four CCA-operated institutions in Tennessee, CCA lists seven plus its headquarters in Nashville.

“They’re doing such long prison terms, and you’ve got so many people going in to prison that there’s a business to provide these facilities and these beds.  It has to stop somewhere.  There are enough forums to make them pay for what they do wrong. By no means am I saying that my husband didn’t do it.  My husband committed a crime; he’s paying his time to society, but it does not mean that you have the right to treat him inhuman,” Thweatt said.