TED’S AN “IMMIGRANT” AND KENYA IS BARACK’S “HOME COUNTRY.” 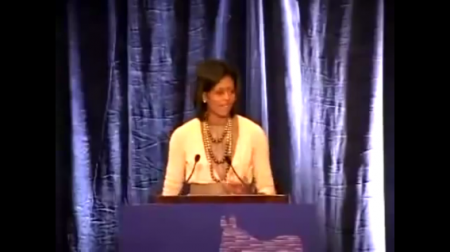 (May 3, 2016) — I had planned to do a piece on why I (and countless other staunch Conservatives) support Donald Trump, but then I heard Heidi Cruz talk about her husband, saying, “Ted is an immigrant. He is Hispanic.” and I had to weigh in.  Hearing her tout this immediately brought to mind Michelle Obama’s betrayal of her own husband’s apparent birth place when she proudly offered, while speaking to the LGBT Delegate, The World as it Should Be, “Barack has led by example. When we took our trip to Africa, and visited his ‘home country’ in Kenya, we took a public HIV test.”

The latter, of course, was confirmed by Obama’s publicist, Dystel & Goderich, in official brochures in both 2003 and 2007, which noted that “He was born in Kenya to an American anthropologist and a Kenyan finance minister, and was raised in Indonesia, Hawaii and Chicago.”

This was only further corroboration of the fact that virtually the entire African continent claimed the then-new U.S. President as its own native son…but I digress!

Referring once more to Heidi Cruz’s offering, spokeswoman Catherine Frazier later explained: “As she has in numerous speeches over and over, Heidi was referring to Ted as being the son of an immigrant.”  Fair enough. “Jane, Joan, whatever!” – for those who remember the 1995 Bud Light commercial (well worth watching again!).

Some years back I heard Ayn Rand Institute President, Yaron Brook, speak at the Tea Party Annual Conference, held in Phoenix, AZ.  He said something that should resonate with every Constitutional Conservative, when he pointed out that, “Before Congress ever considers taking up any law, the members should ask themselves one question: Do we, under the Constitution, have the authority to consider this?”

While that is a paraphrase from memory, the rationale for asking such a question is undeniable. With respect to a Presidential Candidate, I’d suggest that we ask a similar question, before asking anything else:  Is he or she eligible, under the Constitution, to hold this high office?  I suggest that the rationale for asking this question is also undeniable.

The Left (and now, apparently, many on the Right) prove the overriding significance of the stiffer requirements for becoming Commander in Chief, by referring to Article II, Section 1, Paragraph 5, as the “stupidest,” or “worst” provision in the Constitution,” etc., etc.

In his 1995 article, found in the University of Minnesota Digital Conservancy, Professor Robert Post, Dean of the Yale Law School (not Harvard, but close) transparently reveals the following: “Without doubt Joseph Story correctly identified the purpose of this prohibition as cutting ‘off all chances for ambitious foreigners, who might otherwise be intriguing for the office.’ ” (That is taken from Joseph Story’s celebrated, Commentaries on the Constitution of the United States, page 541.)

So, while Dean/Professor Post seeks to dismiss this as the “Constitution’s Worst Provision,” he helpfully, at least, points out its precise and, frankly, self-evident purpose; something only mentioned by the clause’s current detractors (mostly on the “Right” these days) in a derogatory fashion, as does the good professor here.  In other words, these constitutional “scholars” never mention the clause’s obvious and critical purpose – to prevent a person with potentially-divided (“foreign”) loyalties from becoming “the Command in chief of the american army” (in the words of John Jay) – except to deride it.

As a particularly relevant aside, I will note that the current occupant of the Oval Office – who has, for the most part succeeded in “fundamentally transforming” the once-greatest nation on earth, mocking and destroying its spiritual foundations, wrecking its economy, trampling on its Constitution/laws, and decimating its military – would have been the very poster child for the type of man the framers were seeking to preclude from ever becoming our Commander in Chief…in spite of his great “love” for America. As a further aside, if Mitt (short for Mittens?) Romney had ever had the courage to lash out at Michelle’s Barack in that manner, he may well have been the nation’s 45th President, rather than the man he has recently excoriated…a little too much, but also too late!

So let’s end this by answering the question:  Is Heidi’s Ted eligible to hold the highest office in the land?  While it seems that a preponderance of courageous “Conservatives” have taken up the pen to pronounce Mr. Cruz’s eligibility “settled science,” we can dismiss this assertion by answering a single question:  If the higher constitutional bar of “natural born citizen,” set exclusively for the President and Commander in Chief [Senators and Congressmen need only be “citizens”], can be met by one born of not two, but only one U.S. citizen parent, in a foreign land, outside of our national boundaries, then what could possibly be the lower citizenship bar included in the Constitution?

Well, that is simple. The only possible lower bar would be for one to be born outside of the United States to no U.S. citizen parent.  That, of course, can be done, via the process of naturalization…but there were yet no “naturalized” citizens at the time of the writing or the adoption of the Constitution, and yet the Constitution itself recognizes two other distinct types of citizens in its language (including that of Article II, Section 1, Paragraph 5): normal, if you will, “citizens,” and “natural born citizens.”

Clearly one born abroad of only a single U.S. citizen parent would not qualify as the clearly more exclusive class of “natural-born citizens.” So that is essentially all a reasonable person needs to know about the “settled science” of this critical issue…and if the constitutional eligibility of the Commander in Chief of the United States military is not an important issue, or matter of grave concern, I can’t honestly imagine what would be!

To learn more about this critical issue, read the author’s most recent book, Trump vs. The Political/Media Establishment; The Establishment vs. The Rule of Law.  The author, T. M. Ballantyne, Jr., has written a half-dozen previous books, including Oh Really, O’Reilly! and Uncommon Sense…Apparently!