“TO COLLABORATE WITH JIHADISTS IS TO BECOME ONE” 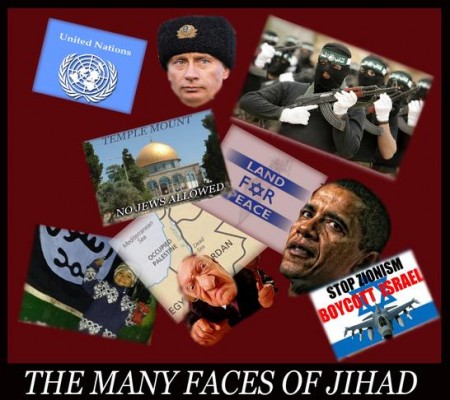 (May 2, 2016) — Islamic scholarship divides the world in two: the House of Islam (dar al-Islam, nations ruled by Sharia law) and the House of War (dar al-harb, nations in rebellion against Allah). It is incumbent on dar al-Islam to make war upon dar al-harb until all nations submit to the will of Allah and accept Sharia law. “He it is who has sent His Messenger (Mohammed) with guidance and the religion of truth (Islam) to make it victorious over all religions even though the infidels may resist.” — Koran 61:9. Jihad is the force that gives Islam meaning.

In his book, Lights Out: Free Speech, Islam and the Twilight of the West, Mark Steyn wrote: “These are the books we will never read, the plays we will never see, the movies that will never be made… The lamps are going out all over the world – one distributor, one publisher, one silenced novelist, one cartoonist in hiding, one sued radio host, one murdered film director at a time.” Preventing free speech worldwide is Jihad, but the Jewish people are Islam’s perpetual target.

In the 7th century, the prophet Mohammad struck the infamous ten-year hudna, with the Quraysh tribe of Mecca, who rejected his claim of prophethood. He broke the agreement over a minor infraction, conquered Mecca, and extirpated the last remaining major tribe of Jews in Medina, the Qurayza, because they rebuffed his faith. Preferring bloodshed to mercy, Mohammad’s 3,000 Muslims set the paradigm of merciless inhumanity for future generations. The brutal annihilation of entire communities is Jihad, and modern-day Israel remains in the spotlight of Islam and her many accomplices.

Allah endorses Islam in battle, celebrates slaughter and enslavement (Sura 33:25-27), and sanctions the capture and beheading of Jews and plundering their property. Jewish experience has shown that Land for Peace has brought nothing but violence and bloodshed from their Muslim neighbors. The concept cannot succeed because land is not returned when the peace agreement fails and becomes a base of operations against Israel. Truces and treaties with Islamic regimes are other opportunities for Jihad.

A similar spirit now infects the nations. The Jews have been a presence in the Golan Heights since Biblical times. After many attacks by Syria, Israel won and, in 1979, Syria signed a disengagement agreement; Israel then democratized the Golan Heights. Although Syria continues supporting terrorism, the Golan is flourishing under Israeli civilian law – with infrastructure, electrical and water services, agricultural improvements and job training, and health clinics for 46,000 Jewish and Druze residents. Israel’s protection has brought welfare and social security programs, schools, freedom of worship, industry and tourism. Yet now, Barack Obama, Vladimir Putin, Syria and the UN are calling for the return of the Golan to Syria. While thousands of people are being massacred in Syria, the UN Security Council together with Israel’s enemies are focused on Israel. Intimidation and coercion for land is Jihad.

Again joining the Jihad war of 1948/49 to enlarge her territory, Jordan occupied Judea, received Samaria from Iraq (renaming the region West Bank), and expelled the Palestinian activists. Another Arab attack against Israel in 1967 became what is now known as the Six Day War, in which Israel regained Judea and Samaria. These wars had nothing to do with Palestinians, yet Obama and Putin are now demanding that Israel abandon the area to the Palestinians. Betrayal by unreliable “allies” is Jihad.

Although Israel is the only homeland for the Jewish people and the only nation whose values and deeds help other countries through every form of natural disaster, and provide agricultural advancements, hi-tech and medical innovation and treatments for even her enemy; and although Mahmoud Abbas brought his wife to Tel Aviv for surgery, and his brother chose an Israeli medical center for his cancer treatment, the Palestinian leader continues the war of lies against Israel. And the world continues to accuse Israel of her enemies’ depravities. False judgment is Jihad.

Israel’s permanent mission to the US and the organization, StandWithUs, submitted a thirteen-panel exhibition, Israel Matters, to the UN in early April, ‘16. The Jerusalem Panel describes the Jewish people as indigenous to Israel, the city as the focus of Jewish life and religion for three millennia, and its holiness to Christians and Muslims. The Arab-Israel Panel describes Arabs as the largest minority (20+ percent) in Israel and as equal citizens under the law in Israel. The Zionism Panel defines “the liberation movement of the Jewish people . . . to overcome 1,900 years of oppression and regain self-determination in their indigenous homeland.” However, Israel was told by the UN Department of Political Affairs that these three Panels were censored for being “inappropriate.” Suppression of the truth is Jihad.

The next step after suppression of truth is the invention of a false narrative. The most recent resolution of the United Nations Educational, Scientific and Cultural Organization (UNESCO) is their de-legitimization of Israel, calling Israel an “occupying power” and giving Arabic names to the Temple Mount and Western Wall, the Jewish holiest site. Thus, they deny the Jewish attachment to the Temple Mount, and ban Jewish worship on the Mount, falsely claiming that Israel is threatening to prohibit prayer to Muslims so as to incite continued deadly attacks by Palestinians. The UN is also planning an egalitarian prayer service space near Robinson’s Arch with restricted access to the site during Muslim holidays (destined for full restriction of all dhimmis). Supporting or inventing a false narrative is Jihad.

Other UN condemnations include Israel’s blockade against Hamas-controlled Gaza and Israel’s control over her historic landmarks, the Tomb of the Patriarch and Rachel’s Tomb, which the UN is renaming and usurping for Palestinians. The UN calls for stopping Israel’s historic excavations, which continues to yield evidence of Jewish history, while never denouncing Palestinians’ continuous destruction of archaeological artifacts beneath the Al Aqsa mosque compound. Destroying Israel’s history is the Machiavellian strategy of Jihad.

The Pentagon has just approved aggressive American airstrikes against the Islamic State, disregarding civilian casualties or the “proportional force” concept. Yet this very disproportionate defense is a frequent accusation against Israel, despite her more serious threat from Hamas and their use of women and children as shields. Although verification of Israel’s extraordinary care and morality exists, the Obama administration invariably faults Israel for “excessive” collateral damage – sheer hypocrisy and, worst of all, destroying Israel’s credibility is Jihad.

Closer to home, anti-Israel activity on American college campuses includes Boycott, Divestment and Sanctions (BDS) campaigns in an effort to isolate, delegitimize, and dismantle Israel, using a tactic of falsely accusing the State of Israel of apartheidism. Additionally, two American academic associations, the American Studies Association and the Asian American Studies Association, passed resolutions to boycott Israel. Boycotts against democratic Israel, but not against despotic regimes, is Jihad.

Harper Collins, publishing giant, omitted Israel from its Middle East map, a powerful tool in delegitimization, saying their maps would otherwise not have been acceptable to their customers. A subsidiary, Collins Bartholomew published its Primary Geography Atlas for the Middle East, without Israel, and its fallacious Palestinian Narrative of History. Thea Stilton and the Blue Scarab Hunt, published by Scholastic, also contains a map without Israel. Palestinian textbooks make no mention of Israel and NPR (National Public Radio) omitted Israel from its Middle East map, labeling it Palestine instead. Denying Israel’s existence is Jihad.

To collaborate with Jihadists is to become one.