HAVE TRUMP’S REMARKS BEEN CENSORED? 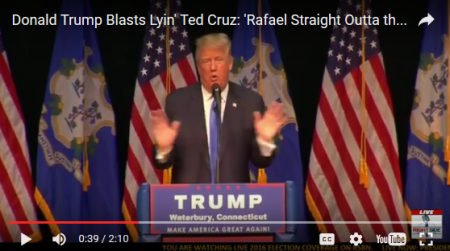 (May 1, 2016) — In writing an article earlier on Sunday about Heidi Cruz’s comment that her husband, presidential candidate Ted Cruz, “is an immigrant,” The Post & Email noted that The Washington Examiner, which appears to have been the original reporter of the “immigrant” comment, misquoted Donald Trump slightly in reporting his April 23 comments in Waterbury, CT.

The paper quoted Trump as having said on that day:

It can be verified from the video of the event that Trump said, allegedly quoting Cruz responding to the revelation that he possessed Canadian citizenship, “I never knew that,” not “I’d never do that.”  Trump also cut his sentence short by saying, “I can’t believe…” rather than “I can’t believe that.”

Additionally, The Washington Examiner omitted Trump’s words, “Four years in Canada” before the words “was a Canadian citizen…”

Cruz was born in Calgary, Alberta, Canada and is said to have lived there until he was four, when he and his mother joined his father in Houston, TX.  In 2013, The Dallas Morning News reported that Cruz was born with “dual citizenship,” although Cruz has shown nothing to verify that he was registered as anything except Canadian at the time of his birth.  Through the Canadian Citizenship Act of 1947, nearly all children born in Canada were instant citizens, regardless of the citizenship of their parents except in the case of foreign diplomats, as in the United States.

It is unknown if Cruz’s mother had to show any identification when she and Ted crossed the Canadian-U.S. border, reportedly by plane, to join Rafael Bienvenido Cruz in Houston.  The elder Cruz reportedly became a Canadian citizen in 1973.

After noting the discrepancies between the Examiner’s quote and that which we recalled hearing and seeing on last weekend’s video, something else caught The Post & Email’s attention.

On April 23, a transcript of Trump’s comments in Waterbury, CT was posted by Twitterer “Sopan Deb” which The Post & Email is certain first appeared in the body of an article at Breitbart.  The next day, the transcript was relegated to its place on Twitter which the reader would be able to see only by clicking the link provided by Sopan Deb.

After observing that the transcript statement of Sopan Deb’s was no longer embedded in the article, The Post & Email submitted two comments questioning its disappearance which were posted for a few minutes under the Breitbart article but then disappeared. One was later found at what looked to be a comment archive of some sort and received one response of which we are aware.

On April 24, The Post & Email viewed the video of the Trump event posted by The Gateway Pundit via RightSide Broadcasting to verify that Trump had said exactly that which Sopan Deb presented in his tweet.  After verifying it, we published a story about it that Sunday afternoon.

Today, it seemed that something was missing from Trump’s original Waterbury comments as quoted by the Examiner.

Rafael!  Rafael! Straight out of the hills of Canada.  Four years in Canada – was a Canadian citizen until 14, 15 months ago.  And then he ran for the Senate and they advised him, you know you’re registered as a Canadian citizen.  He said, “Oh, I never knew that!”…

The subtitle of The Post & Email’s April 24 article was an exact quote from Trump’s Waterbury rally comments.  When one hears and sees the video today, the words “and they advised him” are no longer there and the intent of the sentence altered.

The YouTube video of the entire event, which lasted just over an hour, is also missing the words (begins at 15:12).

The State of Texas has failed to respond to The Post & Email and the North American Law Center (NALC) when asked if it possesses any documentation that Cruz was a U.S. citizen when he sought his Senate seat in 2012.

Exclusive: Trump’s Claim that Cruz was “Advised” about Running for Senate as “a Canadian Citizen” Disappears From Event Video added on Sunday, May 1, 2016

One Response to "Exclusive: Trump’s Claim that Cruz was “Advised” about Running for Senate as “a Canadian Citizen” Disappears From Event Video"