“ILLEGALS OF EVERY STRIPE” 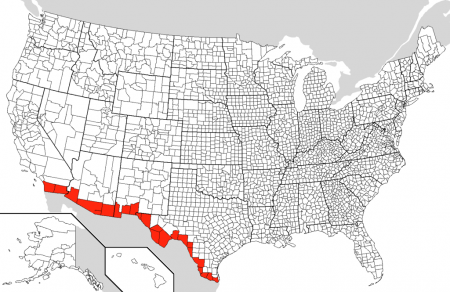 (Apr. 25, 2016) — I first interviewed Dave Stoddard in 2006.  With the ObamaGov having vigorously stepped up its efforts to complete the destruction of our country via invasion from and by illegals from foreign powers, I thought it a good time to visit again with him.

Stoddard provided testimony about immigration reform to Rep. F. James Sensenbrenner’s (R-WI) House Subcommittee on Immigration and Claims in 1999 and a Congressional subcommittee on Criminal Justice, Drug Policy and Human Resources in 2002. His observations and, subsequent, contentions are that our US Border Patrol and our borders are increasingly under the control of a foreign power — the Mexican government.

Dave Stoddard has lived and worked on the Mexican border for most of his life. He was in the Army in the late sixties and then served in the U.S. Border Patrol.

Stoddard has, also, appeared on televised programs on CBS, ABC, NBC, FOX and PBS. He has been a guest on talk radio from California to Maryland and has fought to secure our borders for several decades.

Sher: Dave, since we last talked our southern border crisis has become even more dire. We have cartel members who’ve easily taken up residence in the US and some who have run for political office here and won.  And, just last week another air-conditioned underground drug-tunnel between Tijuana and California was unearthed in which seven tons of marijuana and a ton of cocaine was found.

US Border Patrol Agents are regularly leaving their jobs by the dozens, now, as they’re being commanded by DHS and the rest of the current federal government administration to not stop any and/or all illegals (criminal and otherwise) crossing our border. The situation is untenable for our country. What are your thoughts on this and what are your former colleagues telling you?

Dave:  Actually, there have now been three cross-border tunnels discovered within the last 30 days in Southern California. The recurring underground tunnel incidents is either indicative of increased security on our border or is indicative of the increased determination cartels to have “safe” passage across our border. I tend to think the tunnels are indicative of the increased law enforcement efforts along our border. It seems counter-intuitive that illegal aliens crossing our border are finding the effort much easier while the shipment of drugs by the cartels is increasingly difficult. I tend to think that DHS has applied great pressure on the movement of drugs while winking an eye at illegal alien crossings. Obama and his subversive White House advisor for domestic affairs, Cecelia Munoz, have effectively rolled out the welcome mat for illegal aliens crossing our borders. The morale in the Border Patrol is at rock bottom because of Obama’s Open Borders policy. Obama’s promise to “fundamentally change America” has been fulfilled.

Sher: You and I began these interviews 10 years ago and the illegal alien situation has only become worse…both here and in Central and South America. Please tell the readers about what has been happening in Venezuela with its daily flight from Damascus and Colombia’s efforts to stop the drug trade.

Dave:  I have stopped monitoring the press in Mexico, Central America and South America, so I know nothing about how their societies are currently reacting to the increased human and drug trafficking. Under Hugo Chavez, there was a daily flight from Damascus to Caracas with Mideast passengers who did not return back home on the return flight. There is a no man’s land along the border between Colombia, Venezuela and Brazil. Training camps have sprouted up along those borders. My information is that these training camps are for training Middle Easterners in guerrilla warfare.

Mexican drug cartels co-opted our enemies in the Tri-Border area. The cartel gets its guns while they trade dope and money for arms. I just assume that the Venezuela activity under the new dictator has continued unabated. A while back I saw reports that Colombia attacked some of those training camps and discovered members of the Mexican narcotics cartel being trained to be enforcers for drug cartels. There is now an AK-47 factory in Venezuela and they supply weapons to the cartel. Obama wants us to believe that the cartels get their weapons from gun shops in the USA. There is no gun shop in the USA where you can buy RPGs, explosives and automatic weapons, but Obama wants us to believe that US gun shops are arming the cartels.

Sher: Isn’t Colombia also hitting encampments of Middle Eastern commanders in Venezuela? How serious do you find this information, in that Hezbollah and other Islamist groups aligning with the Marxists are now being allowed training and eventual entry into the USA by the current administration’s totally open borders policies?

Dave: I think that scenario is super serious. It is happening now and Obama is more concerned with global warming while Cecelia Munoz incrementally cripples the Border Patrol. I hear reports of OTMs being apprehended crossing the Mexican border northbound and Obama does nothing but cripple the Border Patrol. Obama promised to be the most open presidency in U.S. history and just the opposite is true. Meanwhile the democrats have made illegal aliens a protected class.

Sher: Speaking of whom, the [former] head of the radical National Council of La Raza (motto…”Por La Raza todo, Fuera de La Raza nada”…For the race (Hispanic) everything…outside the race nothing) Cecilia Munoz was appointed by Obama as the Director of the White House Domestic Policy Council.

In my opinion, Ms. Munoz has been a rabid supporter for the importation of Hispanic illegals into the USA.  Just prior to her current appointment, Munoz served as Obama’s White House Director of Intergovernmental Affairs. Doesn’t that tell us that the Obama government is actively working against the American people and for the “transformation” of this country with illegals of every stripe to replace US citizens?  Both Houses and both sides of the aisle seem to fully support Obama and his apparent treason.  What, if anything, do you believe the American people can do to stop this blatant destruction of our country?  Or, is it finally too late?

Dave: Honestly, I think it is too late to resolve the border situation without a great deal of pain. Hillary gets the permanently dumbed-down vote while Republicans sabotage themselves. In the unlikely event we get a Conservative president who does what is right for America instead of pandering for the ethnic vote, we just might be saved. Even so, it will take years to get back to the status we had before Bush and Obama ruined border enforcement.

Sher:  Ominous ending, Dave.  But, it appears that We-the-People have likely waited too long to even begin to stop this invasion and—even now—few-to-none are doing anything to end it.

Thanks so much, again, Dave, for both your time and for your profound service to our country.  We can now only pray it has some time left for us to either correct this…or to leave.

The Final Destruction of the US Southern Border? added on Monday, April 25, 2016

4 Responses to "The Final Destruction of the US Southern Border?"