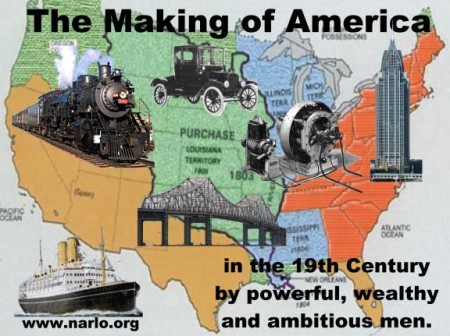 (Apr. 24, 2016) — Our last two articles, “An Establishment Always Evolves Into An All-powerful Oligarchy” and “Men In Dark Suits, Blue Smoke and Backroom Deals,” ripped the hide off of powerful, wealthy, ambitious men, and for good reason.  Still, having done so, it must be abundantly obvious to anyone with half an intellect that the huddled masses and the poor don’t build anything.  So if it wasn’t for those same powerful, wealthy, ambitious men, steel wouldn’t have been made, skyscrapers, bridges, locomotives and ships would have not been built, oil would not have been refined into gasoline, fuel oil, paints, resins and nylon stockings, and a largely untamed land would have not been tamed.  And if it weren’t for the bold financiers who took the huge risks to fund those ventures, none of it would have been possible.

The days of the railroad and land barons of the latter half of the 1800’s and into the early 1900’s were a picture of good and evil working together to build a nation.  America grew at an unprecedented rate during this time under the flag of freedom.  It seems that no matter what a man could dream up, he could bring it to fruition in this great land, if he was bold, brave, ambitious, a little greedy and sometimes ruthless.

Railroads crisscrossed the land from the Atlantic to the Pacific and to all points on the compass, built out of the steel Andrew Carnegie created in his smelters, smelters fired by the almost unlimited coal that lay under the ground for anyone with the courage to dig it up.  The railroad and the “Iron Horse” became the conduit to passenger people and freight all over America, on a ribbon of steel rails and crossties.   Nevertheless, it was no easy task. The railroad builders battled Indians, the weather, landowners and the land itself.  Routes for the railroad right-of-way became political battles between states, towns and townships.  If these powerful men didn’t border on ruthless, the railroad would have never been built.

John D. Rockefeller turned crude oil into the fuel to power our early cars, ships and light our lamps.  Westinghouse gave us alternating current generators, created by the genius inventor, Nikola Tesla.  Westinghouse and Tesla gave us light at night from light bulbs created by the prolific inventor, Thomas Edison.  Charles Goodyear, a self-taught indigent chemist, gave us vulcanized rubber.   Samuel Morse gave us the telegraph and his assistant, Alfred Vail, developed the Morse Code.  Ford gave us the assembly line and the car and expanded our freedom to reach out across the land at faster and faster speeds.  The horse and horse-drawn buggy, wagon and stagecoach became the victim of the railroad and the car.  J. P. Morgan, as ruthless as he was, provided the funds for many of these risky ventures.  At one point Morgan even bailed out the federal government.

America needed these powerful men to take it from a wilderness, agrarian society to a civilized nation, all the while increasing the standard of living of every American.  Our wealth allowed us to become the most powerful nation on earth.  Our wealth and our growing standard of living were the envy of every other nation on earth and still are today.

But with the good came the evil.  Workers were viciously exploited, leading to unions.  Landowners were run over as if they weren’t there.  Suppliers were ripped off.  The land was raped.  To stop the railroad and land barons, violence broke out in the form of land wars, riots, robbery and sabotage.

Miners and loggers took the resources from the land and left it scarred and ruined.  Hydraulic mining tore the land to pieces and sluiced it down into streams, rivers and lakes, poisoning them.  Loggers took the giant trees and left the forest floor littered with branches and smaller trees that were in the way when the big ones came crashing down.  After a dry summer, the forest floor turned into tinder dry fuel for out-of-control, explosive forest fires.

To stem the tide of these no-rules, free-for-all industrial and land barons, mining companies and loggers, government was forced to pass laws.  Now we are not a fan of laws and regulations but when a group of people harm other people and the land on a grand scale, laws become necessary.  To slow the industrial barons down, anti-trust laws were passed and monopoly corporations were broken up.  Even so, powerful, wealthy and ambitious men find ways around laws and nothing has changed.  It has just gotten more subtle and secretive.

In one of our articles a while back we wrote:  “When your vision is clouded by an irrational obsession, the first things to leave your soul are honor, morality and virtue.”  If powerful, wealthy, ambitious men are obsessed with being powerful, wealthy and ambitious, in most cases their honor, morality and virtue are crowded out of their soul, if they had any in the first place.

And so it was with the railroad and land barons of yesteryear and so it is today with the men and women of the Trilateral Commission, the Bilderberg Group, the Council on Foreign Relations, every politician and every powerful, wealthy and ambitious man or woman who seek only wealth and power for wealth and power’s sake.  If nothing stands in their way, as was the case during the industrial revolution and just as much as it does today, then the powerful get their way.  Our representatives can blunt the power of these three groups but only if the people put pressure on those representatives to do so.  The problem arises from the fact that so many of our representatives are card-carrying members of these three groups.

The only thing with enough power to stop them is the people themselves.  If the people fear the powerful and wealthy industrialist, banker, politician, or bureaucrat, or they don’t care what the powerful do, then the people can get kings, dictators, oligarchies, corruption and slavery in return.  In that event, the people get what they deserve.

The hard truth is, without honor in the people, in businessmen and women, or in politicians, a nation is doomed to burn to the ground from the fuel of its own corruption.  We stand on the precipice of that failure today.

What has happened to America and our Constitutional Republic?  What catalyst or disease-transformed politicians into men and women who have become ruthless and devoid of honor?  No, not all men are devoid of honor, but way too many of them are.  Why have the principles of freedom and liberty become passé, out-of-date, or just plain irrelevant?  How is it we have morphed into the false loyalty of “my party, right or wrong, my party.”  That’s Nazi stuff, not American.  What on earth possessed us to “spit” on the foundation of our liberties, in favor of what …… Security? Comfort? Entertainment?  Have we lost our collective minds?

Why do so many Americans think it is perfectly OK to cheat on auto, fire, or medical claims to insurance companies?  And we wonder why insurance premiums are so high!  Why do we lie on employment or loan applications?   Why do we engage in the consumption of illegal drugs that get people killed on both sides of our southern border?  It is Americans consuming illegal drugs that drive the violent drug wars, corruption and the killings in Mexico and America.

The reason for all these things is that many of us have lost our honor.  A large segment of our American population has lost it by succumbing to the siren call of a “free” lunch from government, in exchange for their votes, when we all know the “lunch” isn’t free.  The politicians have lost honor because, in a representative government, politicians are a reflection of the people who vote them into office.

If we do not value honor, integrity and honesty in ourselves, we will not value those very same qualities in our leaders.  In today’s world, those men and women without honor, integrity and honesty continue to be elected to public office.  Therefore, by our own choice, we allow dishonor and dishonesty to perpetuate itself.  Along those same lines we allow powerful, wealthy and ambitious men to deceive us and run all over us and herd us into pens like cattle and sheep.  We are cajoled and manipulated by the media, academia, the public schools and our institutions of government that collude with powerful, wealthy and ambitious men.

Have we become a nation of sheep that does not think for themselves and cannot recognize a wolf when they see it?   Have we become so numb to reality by drowning in a gluttonous diet of entertainment and self-gratification?  Does liberty mean so little that we would sacrifice it out of fear and intimidation of those with power over us?  Are we so afraid of the bully that we would let him rule us with deception, propaganda, distortions, lies and sometimes force?

Ladies and gentlemen, we cannot expect our politicians, businessmen, or union members to be free of corruption if the American people themselves are corrupt, or hopelessly apathetic.  If the American people are without honor, it is quite likely that those they elect to office will also be without honor.  It is folly, if not just plain stupid, to expect our representatives to be more perfect than those who put them in office.

Nevertheless, having said all that, a nation still needs powerful, wealthy and ambitious men and women to create, finance, invest, invent, market and build things.  The trick is to keep their power, their wealth and their ambition in check.  Laws can’t do that alone.  Only honorable people who care about their freedom can do that.  After over two centuries of trying, we are failing miserably.  As a result, our identity as a free nation and a people and our very sovereignty are in grave peril.

Over the last 10 years we have written over 500 articles on freedom, liberty and property rights through our weekly column.  Many of those articles touched on honor, morality and virtue and how they are irreplaceable elements to a free society and maintaining liberty, not in a religious context but from a purely pragmatic viewpoint.  You can find those articles on our website by title and date HERE, that is of course, if you care about such things as freedom, liberty, property rights, honor, morality and virtue.

One Response to "A Nation Needs Powerful, Wealthy, Ambitious Men!"