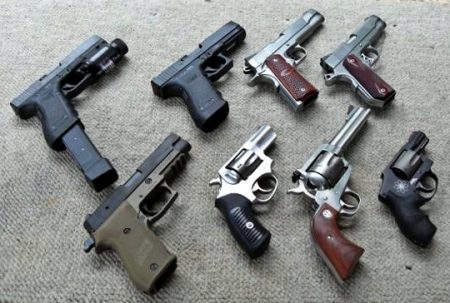 (Apr. 23, 2016) — “Good evening, ladies and gentlemen, and welcome to ‘Pulse of the Nation.’ For those of you who aren’t familiar with us, it’s our job to find out what’s on everyday people’s minds; to get down to the nitty-gritty on what makes our country tick by interviewing people just like you on their trek through life, or in this case, on their way to wherever they’re going on this sidewalk.

“Besides yours truly, Mr. Roving Reporter, we have Molly, the sound-boom operator, and Stan, the cameraman. We usually tape the show in the morning, then it’s back to the studio to do the editing and then we send the finished product to the station – hopefully — by the deadline and then they, in turn, broadcast it whenever they can get the most advertising dollars.

“And speaking of people to interview, here comes a man walking his dog. Good morning, sir, mind if I ask you a question? Oh, I remember you: aren’t you the crazy one who talks for his dog or something like that?”

“Look, son, calling a Vietnam Vet ‘crazy’ isn’t the best way to make friends. Just because you have some kind of issue about me being the mouthpiece for my dog here, Miss Ginger, that’s not my problem: it’s yours.”

“It’s sure not my problem.”

“It is now. See how it starts? It starts by some young whippersnapper running his mouth. My wife likes your show, by the way. Now, if you’d like to ask my dog, here, a question, you’re welcome to. She tells me she’s got a lot to say.”

“Look, maybe I’m the crazy one after all, but if you or anyone else thinks that I’m going to interview a dog, and on camera to boot, they got another thing coming. ”

“Okay, just for kicks, let’s say I do interview Miss Ginger; what then?”

“That’s another strike, son. Not a good idea to use the phrase ‘just for kicks’ when talking to a dog; do you see where I’m coming from?”

“I’m sorry, but I see this is all spiraling out of control, but as they say, ‘out of the pan and into the fire,’ or something like that.

“Better look at me or the men in white coats will come and take you away.”

“And here I thought I was going to have a normal day.”

“Not in these perilous times you aren’t, and certainly not in Obama’s America where the inmates have ruled the roost for the past seven years.”

“Is this the dog talking or is it you?”

“Let’s just say, for the sake of this interview, it’s either me or the dog. Maybe there’s a difference; maybe not. Now the dog, here, would mention something along the lines that you shouldn’t be allowing the immigration of people who hate dogs. And then I just might chime in and say, not only do they hate dogs, but all animals, all living things, and that includes women as well. I mean, there’s the obvious and then there’s the ‘way-over-the-top’ obvious; the ‘in-your-face’; the ‘what, are you blind?’ and the ever-so-popular, ‘What were you thinking?’ when your wife and/or daughter is raped/tortured/beheaded because someone’s complete misunderstanding of ‘Just because they do it over there they won’t do it here’ warped sense of ‘reasoning.’ Look, we’re on the way to the park because the dog has to go. Bye.”

“Goodbye, man and dog. Whew, that’s one for the books. Ah, here comes a young lady. Good morning, mind if we ask you a question? Roving and crew for ‘Pulse of the Nation.’”

“I know who you are. Good morning to you and crew. Ask away.”

“Old news. Remember right after 9-11 when the FBI so gallantly accommodated the ‘extraction’ of Osama bin Laden’s family out of Boston back to Saudi Arabia? Old news; ancient history, and if you can’t come up with something better, I’ve got a life to live.”

“What about this transgendered washroom issue?”

“See what I mean? You’re not with it; you’re not hip. This transgendered issue isn’t even an issue. It’s just as asinine as the ‘same-sex marriage’ hogwash. Look, if you want to placate the mentally-challenged, give them something that they can’t understand and make them think they can. Works every time. Like the ‘anti-Trump’ is good for America when in reality it’s the worse possible scenario for America. Look, one more try and then I’m out of here.”

“What’s your take on the 2nd Amendment?”

“Simple. First have to ask yourself why anybody would want to leave another person defenseless; what ulterior motive can they possibly have? It’s either to rob them or make them defenseless for some other reason, and whatever that reason could be sure can’t be good. Look, remember what Hitler did to the Germans after he confiscated their guns? Well, guess what? Obama and his thugs have been following the NAZI blueprint page-for-page.

“Paris was a ‘gun-free zone’ and look what it got them. If the bad guys want guns, they’ll get guns, it’s as simple as that. If your life depended on you being armed you’ll find a way to be armed, I don’t care where you are.

“When I was living at home, if a guy came over to pick me up for a date my father would ask him if he carried. If he said ‘yes’ I was allowed to go on the date and if they were defenseless my dad would kick them out.

“It didn’t make any difference if I had a gun in my purse: my dad just wanted to make sure the young man had a head on his shoulders is all. Anyway, the argument is as stupid as women on Navy ships. By the way, like your show. You going off for a burger now, aren’t you? Goodbye.”

“Wait, wait! Thanks for watching tonight’s show, so on behalf of the crew I’ll be saying goodnight: Goodnight.”