ALLEGATION:  JUDGE WAS “CHERRY-PICKED” BASED ON “PAST EXPERIENCE”

On Monday morning, Williams and Atty. Mario Apuzzo argued their objections to Cruz’s placement on the New Jersey primary ballot to Masin.  Atty. Shalom Stone represented Cruz.  Williams, who is an attorney and teaches law at Catholic University of America in Washington, DC, represented himself, while Apuzzo represented three New Jersey citizens and registered voters.

Cruz was born in Calgary, Alberta, Canada to a Cuban father and a mother born in the U.S.  Cruz claims that his mother never became a Canadian citizen as her husband reportedly did in 1973 and that his alleged “citizen-by-birth” status makes him a natural born Citizen as required by Article II, Section 1, clause 5 the U.S. Constitution.

In his opinion issued on Tuesday after hearing the arguments, Masin wrote that the objectors possessed “standing,” that their objections were “justiciable,” and he acknowledged that Cruz was born outside the country.  However, Masin then wrote, in part:

His mother was born in the State of Delaware in 1934, and was a citizen at the time of her birth and remained so.  Further, it is undisputed that at the time of his birth to an American citizen, Mr. Cruz was a citizen of the United States.  Therefore, this case involves a purely legal issue, that is, is Senator Cruz a “natural born Citizen?”

In an interview following the presentation of arguments on Monday evening, Apuzzo told The Post & Email that he “did not concede” that Cruz was born to a U.S.-citizen mother.  “I’m not saying he’s not, but he has the burden [of proof],” Apuzzo said he told the judge, then asked, “Why doesn’t he just conform with a little paperwork?”

On Monday night, Pete Williams of NBC News published a report on Williams’s write-in candidacy and ballot challenge to Cruz’s eligibility while contending that Cruz “became a naturalized U.S. citizen in 2014.”

Cruz renounced his Canadian citizenship in May 2014, nine months after The Dallas Morning News revealed to the public that he possessed it, a fact which Cruz’s Senate office originally denied.  Some speculated as to why it took Cruz nine months to file the renunciation request, which costs $100 and must be accompanied by evidence that the applicant has or shortly will have citizenship in another country.

On pages 21 and 22 of Masin’s opinion, he relied on the 1790 Naturalization Act, which referred to children born “beyond sea” to U.S. citizens as “natural born citizens.”  However, Masin did not discuss that the statute was repealed five years later.

Masin concluded that despite Cruz’s having been born outside the country and that doubts about his eligibility continue to exist, “…the more persuasive legal analysis is that such a child, born of a citizen-father, citizen-mother, or both, is indeed a ‘natural born Citizen’ within the contemplation of the Constitution.” 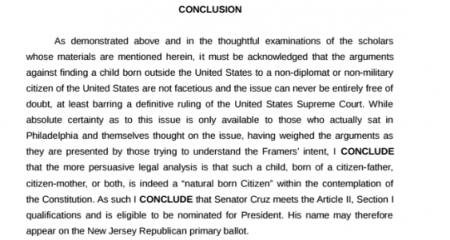 An essay published in the Harvard Law Review Forum 12 days before Cruz declared himself a presidential candidate, although arguing strongly that Cruz is eligible by the 1790 Act, also acknowledged that in regard to the presidency, “a naturalized citizen cannot serve.”

On April 13, 2016 Victor Williams filed an “Exception” (protest)  with the New Jersey Secretary of State to respectfully but strongly disagree with the “Initial Decision” of administrative hearing officer/judge Jeff Masin.

In addition to detailing the substantive errors in Mr. Masin’s determination, Williams raised serious ethical and procedural concerns regarding how the New Jersey Office of Administrative Law had “recalled” Mr. Masin in a special appointment to hear the Cruz dispute rather than follow regular order in the random appointment of an existing, neutral OAL hearing officer/judge.

The final and only real judge in the ballot disqualification matter is Lt. Governor/Secretary of State Kim Guadagno whose sworn duty is to protect the integrity of the New Jersey ballot.  She will issue a ruling by Thursday, April 14, 2016.

Williams’s and Apuzzo’s respective briefs are uploaded below.

Williams began his brief by stating that Masin was “cherry-picked” to preside over Monday’s ballot objections without regard to “a regular order of a random assignment.”

On page 2 of his brief, Apuzzo stated, “ALJ Masin has neither considered nor addressed the historical and legal evidence that objectors provided in their two briefs to the court.”