WHERE IS THE PROOF OF HIS U.S. CITIZENSHIP? 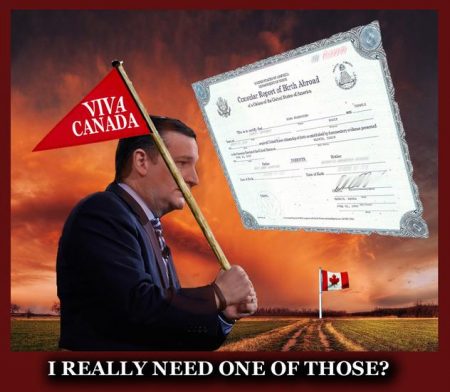 (Apr. 8, 2016) — There has been speculation across the social media spectrum this past week that something big was about to be revealed concerning Ted Cruz.  I’m not referencing any of his purported dalliances with those to whom he was not married, but something quite a bit more troubling.

As we all know, there is a great dispute among the ideologues, the judiciary and political pundits concerning what the founders intended to be the requirement for a candidate to be considered a “Natural Born Citizen” and therefore eligible to hold the office of American President.  Senator Cruz’s troubles may be much more problematic than his status relating to that particular phrase in Article II.

It is important for readers of this article to know, this writer is more than confident that Ted Cruz does not qualify as a Natural Born Citizen.  Many have said, “We need to drop this issue because no one cares about what it actually means.”  The only concerns any one of these people have are if their illegal candidate has the proper ideology or that any definition of the term will not impact the legitimacy of Obama.

No one could argue that no matter what the description of a Natural Born Citizen could be or should be, the President of the US must be at least a citizen.  There now appear to be some very important questions relating to that quite minimal requisite.

Here are some facts. First we will discuss what is required by Canadian law to be a citizen of Canada.  Keep in mind that Canadian law has no relevance nor control over U.S. law, except that it references what would be required for foreign parents giving birth on Canadian soil to have that child be a Canadian citizen.  Any child born to legal residents on Canadian soil is automatically a Canadian Citizen and would be issued a Canadian birth certificate to that effect.  Understanding that some foreign residents or workers may not want their child to be a Canadian citizen, laws were enacted which would halt the automatic citizenship.   The parents would have had to report the birth to the Consulate of the country where the parents were citizens, in Cruz’s case, either the U.S. Consulate or the Cuban Consulate.

It would have been legal under U.S. law for the parents to apply for citizenship later, even if the child already had a Canadian BC.  They would have to have applied to the American Consulate for an application or from the U.S. State Department.  They would have had to get this application either at the time of birth or a later date not exceeding the child’s 18th birthday.   It is called the “Application for Consular Report of Birth Abroad.”

This application is extensive and requires payment of a fee. It is $100 now, but it may have been less expensive 40 years ago.  The parents were required to supply much information and apply their signatures to the application in witness of a U.S. Official.  Once this process is complete and approved, the child will receive the Certificate of Consular Birth Abroad (CRBA).  That certificate confers upon the holder naturalized citizenship.  Without the CRBA, no person born outside the country while his parents were residents outside the country is a citizen. (Exceptions exist for parents in service of their country, which does not apply to Cruz.) Once that person has been issued a CRBA he would be legally permitted to obtain a Social Security number, an American passport, etc.

This following text was copied directly from the State Department website:

“Children who acquire U.S. citizenship by birth abroad to a U.S. citizen receive a Consular Report of Birth Abroad (CRBA), the equivalent of a U.S. birth certificate.”

It must be, therefore, that for any child to be a naturalized citizen of America his parents would have had to go through the application process and obtain the CRBA.  Without that certificate any child born in Canada would remain only a Canadian citizen until such time as an application was filed and then granted by the State Department.

Regardless of whether or not the parents returned to the U.S., their child would not be an American citizen.  And if such a person, upon reaching adulthood, had not filed and been approved to hold a CRB, and then denounced his Canadian citizenship, he would then, in all that is logical, simply be a man without a country.  Denouncing a citizenship from one country does not automatically grant citizenship of another, even if one might be living in a particular country.

In the final analysis there are several important issues which need to be examined.

Does Ted Cruz have a Canadian Birth Certificate?  Because if he does, it would suggest that his parents, at least at the time of his birth, did not file for American citizenship with the American Consulate in Canada.

Does Ted Cruz have a CRBA, and when was the application filed in the American Consulate; or if done later, the State Department?

If Ted Cruz does not have a CRBA, he is not an American citizen and will not be until such time that he files and is approved.

If Ted Cruz does not have a CRBA and has a Social Security number, a crime may have been committed in obtaining that number.

If Ted Cruz does not have a CRBA and has denounced his legal citizenship of Canada, he is now a citizen of no country, except possibly Cuba.  (This writer is not familiar with nor does he care about Cuban citizenship requirements)

If Ted Cruz has only a Canadian Birth Certificate and an American mother who was living in Canada when he was born, he is not an American Citizen.

If Ted Cruz does not have a CRBA he is illegally holding the political office of United States Senator, because he is not a citizen.

If Ted Cruz does not have a CRBA he is not a naturalized citizen, and won’t be until such time that he goes through the application process.

If Ted Cruz is not a naturalized citizen, he surely can’t be a Natural Born Citizen and certainly is not eligible to be Commander in Chief of America.

All of this may well be moot if in fact Cruz can produce the CRBA.  I have scoured many documents and websites including those put up by Ted Cruz.  To this date no CRBA has been found or even mentioned.  He may have one someplace.  If he does he’s good to go as far as not having an illegally-obtained Social Security number and he’s okay as far as holding the office of US Senator, depending of course that the date on the CRBA predates those other events.

Some might even suggest that given what we know about Cruz’s mother, that she was born in America; “What’s the big deal?  Why should he have to go through the application process just to get a piece of paper which says what we already know?”

To that it should be noted, first, it’s the law and second, it’s the law for a good reason.   That object being, of course, the government requires more proof of lineage beyond the word of an individual.  People, it may come as a surprise to some, have been known to lie.  Rafael “Lyin’ Ted” Cruz is perhaps the greatest example of why the country needs to have foreign-born people acquire a CRBA.

A concluding thought:  Cruz is a very well-trained lawyer who knows the law. Why, then, has he not long ago gone through the process of getting official proof and documentation of his right to be a naturalized citizen?  Is it possible that that process might reveal something? Who knows? But before we put yet another unknown entity into our White House, wouldn’t it seem a good idea to find out?

Unfortunately for Ted Cruz, even if he has the CRBA and is a legally naturalized citizen, he will never, ever be Natural Born.

If anyone has a copy of Cruz’s CRBA, please make it available to me or tell me where it can be seen.  Cruz has been asked about this document and has said he did not have to go through that process.  Maybe because he’s so darned special.  In his mind he may not have had to, but under the law, he does.

By the way, Obama may have a few people who are probably a bit more sophisticated in the use of PhotoShop than they were a few years ago.  Cruz may want to contact them.