“OTHERS” ARE WORRIED ABOUT IT; CANDIDATE NOW SAYS IT’S A “NON-ISSUE“ 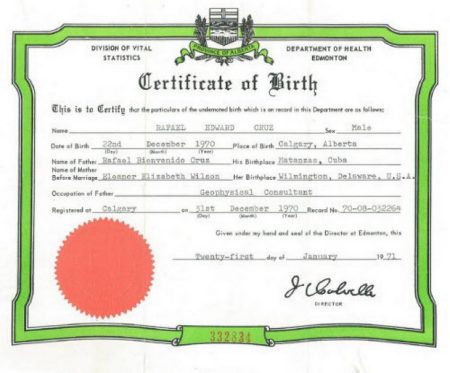 (Mar. 22, 2016) — In a video uploaded to YouTube in October 2013 by BirtherReport.com produced by fusion.net, Sen. Ted Cruz is seen in an interview with an unidentified reporter who presses him on whether or not he plans to run for president in 2016 and if he is constitutionally qualified.

In November 2012, Cruz was elected to the U.S. Senate from Texas, where he said that he was striving to provide effective representation for “26 million Texans and bringing back economic growth.”

The reporter appeared to ask Cruz about his support of the partial government shutdown in the fall of 2014 which Sen. Harry Reid, at the opening of the video, deplored.  “He said it was very damaging, and he said it because you want to run for president,” the reporter told Cruz.  “Do you?” he asked.  When Cruz did not answer directly, the reporter asked bluntly, “Do you want to run for president?”

“You were born in Calgary, Canada, so can you run for president?  The Constitution says you can’t,” the reporter insisted, to which Cruz said that his birth to a U.S.-citizen mother and Cuban-citizen father rendered him “a U.S. citizen by birth.”  Cruz declined to answer affirmatively when the reporter differentiated between “citizen” and the higher standard of “natural born Citizen,” as is required by Article II, Section 1, clause 5 of the U.S. Constitution.

“Beyond that, I’m going to leave it to others to worry about the legal consequences” of his constitutional eligibility, Cruz told the reporter, who conducted research and concluded that Cruz was born a U.S. citizen.  The reporter did not, however, state that Cruz met the higher standard of “natural born Citizen.”

Cruz confirmed to the unnamed reporter that he had at that time begun the process of renouncing his Canadian citizenship which he originally denied having possessed all of his life, revealed by The Dallas Morning News in August 2013.  His application to renounce was filed in May 2014 and approved the following month, with many curious as to why the process was not initiated directly after Cruz allegedly learned of it.

Cruz had publicly claimed that his mother had told him that he was born a U.S citizen in Canada and that he would have had to have taken specific steps to claim Canadian citizenship.

Cruz is considered a constitutional scholar and attorney and is Harvard Law School graduate.  He led the Debate Team at his undergraduate alma mater, Princeton University.

On March 23, 2015, Cruz declared himself a presidential candidate following the publication approximately ten days previously of an essay in the Harvard Law Review titled, “On the Meaning of ‘Natural Born Citizen'” by two former solicitors general.  To date, he has been unwilling to authorize the release of his documentation from both Canada and the United States, if the latter possesses it, with the only documents made public his Canadian birth certificate and the certificate of citizenship renunciation.

Many Americans are apparently concerned about the “legal consequences” of whether or not Cruz meets the “natural born Citizen” criterion, as ballot challenges in a handful of states leading up to the Republican primaries have been filed. Administrative law judges hearing the challenges have declined to remove Cruz’s name from the state ballot.

In November, Rep. Alan Grayson of Florida promised to file a “beautiful lawsuit” on the Alan Colmes radio show if Cruz became the Republican nominee.  “The Constitution says natural born Americans, so now we’re counting Canadians as natural born Americans? How does that work? I’m waiting for the moment that he gets the nomination and then I will file that beautiful lawsuit saying that he’s unqualified for the job because he’s in eligible,” Grayson said.

In November 2014, Ken Post wrote to the Republican National Committee (RNC) to express his concerns about the consequences should Cruz received the Republican nomination given the questions about his constitutional eligibility. In his letter, Post depicted a scenario whereby following the nomination, the Democrat Party would file a lawsuit which the courts would hear and adjudicate in the Democrats’ favor shortly before the general election, leaving the Republican Party without adequate time to find a qualified candidate.

Post further elaborated on the predicted scenario by publishing a fictional but perhaps realistic news release early this year.

Professors of constitutional law and other legal minds are divided over whether or not Cruz can be considered a “natural born Citizen.” The term was included in the Constitution after Founding Father John Jay expressed to George Washington in a letter during the time of the constitutional convention that foreign influence should be prohibited in the office of the presidency. Washington later responded to Jay’s “hint” by stating that his suggestion was well-taken.

There was reportedly very little, if any, debate over the inclusion of the “natural born Citizen” term.  Very few in the media have delved into the origins of the term or seriously questioned the eligibility of any candidate.

In 2008, Obama’s eligibility was questioned amidst rumors and reports that he was born in Kenya or Indonesia, not Hawaii, as he claimed.  The media failed to investigate, and anyone who openly questioned Obama’s eligibility, life story, past associations or allegiance was immediately labeled “a racist” by his online supporters.  The criminal investigation conducted by the Maricopa County Cold Case Posse into his scant documentation has at least touched on the identities of some of those individuals in addition to declaring the birth certificate image and Obama’s Selective Service registration form “computer-generated forgeries.”

Flashback: Cruz Said He Would “Leave it to Others to Worry About the Legal Consequences” of His Eligibility added on Tuesday, March 22, 2016

3 Responses to "Flashback: Cruz Said He Would “Leave it to Others to Worry About the Legal Consequences” of His Eligibility"