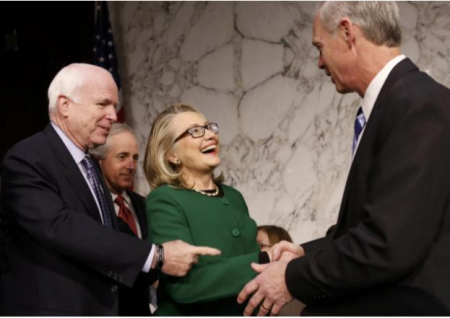 (Mar. 15, 2016) — On September 11, 2012, the Democratic cabal of the criminals cited in the title became willing partners to a ghastly massacre that need not have occurred. For any nation to have one of its senior diplomats killed while performing his duty is tragic and senseless; to have him tortured, emasculated and mechanically sodomized and tossed into a roadside ditch is without precedent, animalistic and grotesque!

Not only did this occur on the executive watch of an obviously uncaring, sordid, un-American, Democratic Party faux president, but he is still in office nearly FOUR years later, a situation criminal in and of itself. To exacerbate the situation even more, during a Senate hearing Clinton stated, “At this point, what difference does it make?” How crass can one witch be?

Just recently, the former Secretary of State, describing the butchery noted above, called the mother of Sean Smith, one of those killed during the attack, a liar.

As a matter of fact, and on the record, Mrs. Smith was absolutely correct. A quote: As The Federalist reported in October [2012], “Hillary’s own e-mail correspondence shows that from day one Clinton had two different stories surrounding the cause of the Benghazi attack. Under her leadership, the State Department pushed out a false, and politically advantageous, narrative to the American people blaming an Internet video, while privately acknowledging that the events in Benghazi were purely motivated by organized Islamic terrorism.”

To further complicate matters, UN Ambassador Susan Rice went on five different TV talk shows and peddled the administration’s totally false message that an anti-Muslim video was the cause of the attack. Though government officials eventually said the attack was an act of terrorism with ties to al-Qaida, White House officials initially said the violence was the result of a mob protesting an anti-Muslim film that had been posted on YouTube.

Why would a rather effective UN Ambassador knowingly go along with two compulsive liars? Easy:  she was aware that Clinton was leaving the Department of State and Rice aggressively sought the position that ultimately went to “Stolen Valor non-hero” John Kerry.

Today, March 15, 2016, just over three and one-half years after these horrendous crimes were committed, few steps or actions have been taken to bring these notorious criminals to trial. Far too much focus is on Clinton’s email server, which appears to be just another delaying tactic, while the same old dirty politics is the real, and only, game in Washington.

1. Clinton’s actions before and during the Benghazi debacle were investigated “thoroughly” by a Clinton hand-picked Accountability Review Board (ARB). Since when does a “suspect” get to choose the “jury?”

3. Barry Soetoro-Obama was re-elected to continue his abuse of the office of president, the Constitution and the other two branches of our government.

4. Eric Holder resigned awaiting the retirement or death of U.S. Supreme Court Associate Justice Ginsberg in order that Soetoro-Obama could nominate him as the replacement.

5. The 114th Congress, even in the light of Soetoro-Obama’s threats and acts as dictator, has abjectly failed to Impeach this “Obnoxious” faux Chief Executive. What could be their excuse? Inter-party collusion?

6. Two members of the United States Senate spend more time on the Presidential Campaign trail than they do in the Senate chambers performing the obligations for which they are handsomely remunerated AND, neither is legally qualified to serve as President per Article II, Section 1, Clause 5.

7. The Republican Party establishment has failed to produce any evidence to prove that Ted Cruz and Marco Rubio are, in fact, qualified to serve; rather, there are indications that the Chairman of the GOP, Reince Preibus, wants to bring about a brokered convention to defeat the only superbly-qualified candidate in the race, Donald J. Trump.

And though the records of the House of Representatives indicate more than the required 34 States have made application for an Article V Convention of States, Congress has either simply ignored or blatantly refused to comply.

8. Lastly, Soetoro-Obama gave as his reason for not sending aid to Benghazi, “There was not enough time!” That is both stupid, ridiculous, un-American, and a blatant LIE! How did this arrogant phony, having but little intelligence and no military experience, know how long the “attack” would last? Furthermore, Gregory Hicks, Deputy Chief of Mission, testified that he “virtually begged for help” as Stevens and his colleagues were being killed that night of Sept. 11, 2012. The help never came. The administration’s response has been that Hicks, a diplomat, is no expert in military capabilities, and his allegations have already been directly rebutted by both Gen. Martin Dempsey, the Joint Chiefs chairman, and former Defense Secretary Leon Panetta. Dempsey testified in February that it would have taken “up to 20 hours or so” to get F-16s to the site, and he called them “the wrong tool for the job.”

9. The testimony by Dempsey and Panetta has been labeled as false by numerous military experts such as Retired Admiral James “Ace” Lyons, who has stated and reiterated to the effect that “Naval Air was poised and ready in Aviano, Italy on the evening of September 11, 2012.  Our fighter jets could have been at our Benghazi mission within an hour.”

10. Lies, deceptions and misdirection have been and continue to be hallmarks of the Soetoro-Obama administration and of the Clintons.