“SIDES HAVE BEEN CHOSEN” 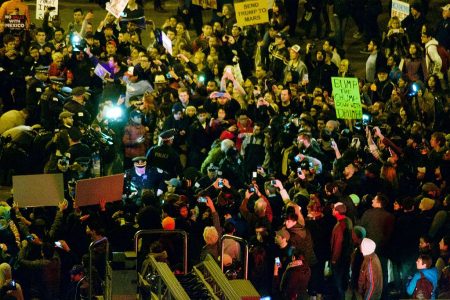 (Mar. 14, 2016) — “Remember, democracy never lasts long. It soon wastes, exhausts, and murders itself. There never was a democracy yet that did not commit suicide.” ~ John Adams

“Democracy is the road to Socialism” ~ Karl Marx

Friday night last, in the city of Chicago, we saw a microcosm of what those in government who see that government as a path to power and wealth and those they promise to support for life, in return for their votes, have brought to this once proud Republic.

The dichotomy of law enforcement shooting farmers and ranchers in the West in order to seize private property for their masters while members of law enforcement are shot to death by welfare recipients and illegal aliens in the cities that have embraced socialism on a grand scale is lost on Ignoramus Americanus and those who blindly serve and worship the god called government.

Black Lives Matter, La Raza and others are demanding, using violence if necessary, the government continue to provide them with “free stuff” such as Hillary and Bernie are falling all over themselves to promise, not only to continue, but to increase. When those who suckle at the breast of current socialist polices in this country form a brotherhood with a new wave of immigrants (Muslims) who see violence as a means of revenge and retribution, many more cities in this country will find themselves awash in violence and death.

Donald Trump, for all of his warts, the largest being his recently-avowed allegiance to Israel (a commitment to Israel is a commitment to perpetual war and a disregard for the principles of US sovereignty), scares the crap out of those who depend on the government for their daily bread and circuses. The fact these factions bonded together to cause the cancellation of a Trump appearance in Chicago is truly a portent of things to come all over this country. Shutting down a major political presentation will only fuel the monster.

Take a close look at Socialism where it is most highly concentrated in this country. Major metropolitan cities are the best examples, with Chicago being a leader in socialist program endeavors. Chicago is the hometown of several well-known Marxist and Fabian Socialists, including, Obama, Hillary, Saul Alinsky (Rules for Radicals) and others. Socialist organizations abound in Chicago with a recent meeting of Socialists in that city drawing groups such as Solidarity, Socialist Alternative, The International Socialist Organization and the Chicago Teachers Union. Also, according to Chicago-Magazine, Bernie Sanders found Socialism at the University of Chicago.

It is also of relevance that Chicago’s current mayor, a friend of the Clintons and former chief of staff for Obama, is a die-hard Fabian Socialist with dual citizenship with Israel.

The rank and file among the Chicago Police Department state the leadership of that city, all the way to Mayor Rahm Emanuel, intentionally allowed the crowd consisting of Black Lives Matter and the beneficiaries of Chicago’s “sanctuary city” status to disrupt the Trump rally in order to prevent the public from seeing support for Trump in that city. According to these officers, very few police assets were assigned to the event—very unusual for an event of this magnitude. So who are Trump’s enemies—–Democrats and the Republican Party old guard—because they both work towards the same socialist goals.

The overwhelming number of those shot, and those doing the shooting in Chicago, are of the same race or ethnicity as those who shut down Trump’s appearance on Friday. You’ve seen them in the media; Black Lives Matter folks and others proudly waving the flag of a foreign country. (Mexico)

When these “people of color” riot in cities such as Ferguson, Missouri and Baltimore, Maryland, set fire to businesses and destroy private property, the police are told to stand-down and wait for the violence to subside, but when a group of White ranchers and farmers peacefully demonstrate against the unconstitutional acts of government, they are lured into an ambush and murdered with the survivors placed in prison, quite probably for some, the rest of their lives.

When one mentions Socialism, the next thought that comes to mind is the Democrat Party, but, truth be told, the Republicans support socialist polices and fascist policies just as much as the Democrats—the only difference being the Republicans deny it. But, try to find a Republican who does not support and defend Social Security, Medicare, and Medicaid, all of which are socialist. But, it appears many Trump supporters have wised up to the deception. That is the reason Trump is universally hated by those of socialist persuasion in both parties.

We read and hear often now of the crimes being committed throughout the countries of Europe who have opened their borders to a wave of immigrants—immigrants who have totally different cultures and values than the inhabitants of the countries those immigrants now inhabit. But, at the same time, we somehow ignore the crimes that are being committed throughout our own country by immigrants, many of whom are here illegally. Check the 10 most wanted feature of Tucson, Arizona’s website, or watch the local news from Albuquerque, Dallas, or hundreds of other cities. Combine this with the rampant incidence of violent crimes in cities like Chicago, Ferguson, Baltimore, Detroit, Oakland, Memphis, Birmingham, Atlanta, Stockton, Cleveland, and Buffalo, and one will quickly learn there is a war going on in this country. Check the race or ethnicity of the majority of the perpetrators of the out-of-control crime in those cities. In most cases you will find it to be the same as those who rallied to shut down the Trump rally in Chicago. Racism is as racism does.

Wake up, people. The lines have been drawn; sides have been chosen. Our central government; its shills, sycophants and white apologists have created a monster while trolling for votes. A monster they will not oppose, for at the center of that creature lies the basis of their power. When the Muslim hoards arrive—riding your tax dollars into this country—things will get much worse. If you take a close look at those who are clamoring for the admission of a new wave of immigrants, you will find Socialism to be their religion of choice.

To appease the illegals already in this country, along with the millions of people of color who have been the beneficiary of trillions of taxpayer dollars in the so-called war on poverty, the central government must eliminate entirely the culture that created this country and relies on its founding principles and the rights guaranteed by their Creator as the basis for their Freedom and Liberty.

Who showed up in Harney County, Oregon to oppose those who were protesting the unconstitutional acts of our central government? The same forces who murdered LaVoy Finicum and imprisoned the Bundys and others who opposed them? Dare we ask why these same assets are not deployed in cities like Chicago where shootings and homicide are the norm instead of the exception? The answer is obvious: those criminals shooting each other every few hours support the central government and embrace Socialism on a grand scale. They are indeed the wards of the State. The people who assembled in Harney County oppose the illegal actions of that same government. Who, indeed, is the enemy of the State? More importantly, who does our central government see as the forces which contest their continued pursuit of Socialism?

The culture of our founders and their ideas for a Republic are a huge impediment to our Socialist oriented central government’s end game. This government, its standing army and  federal and state sheriffs, cannot allow ideas of opposition to their tyranny to grow and flourish. The central government has declared Freedom, Liberty, private property and the culture of our founders to be its sworn enemy. The evidence is everywhere—-look at the streets of Chicago and a country road in Oregon.

Michael is a political activist, writer and teacher who defends and teaches the Constitution as ratified (Originalist), our Bill of Rights and the tenets of our Declaration of Independence. He is constantly trying to understand why the great majority of people in this country are content being slaves to an unconstitutional, criminal government; a government that is systematically destroying the intent of the founders of this country and the culture that brought us Liberty and Individual Freedom. Dependent on readers in continuing this effort, please support his work by mail at: 404 West Main St. PMB 121, Cortez, CO 81321.

We Are Almost There: Socialism Coming Home to Roost added on Monday, March 14, 2016