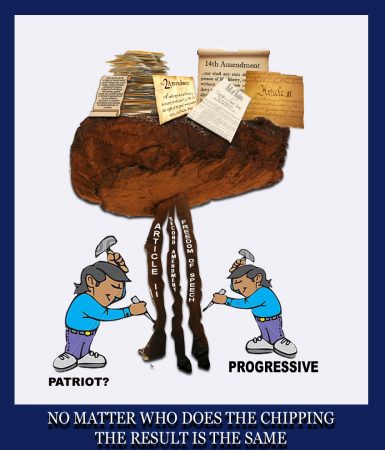 (Mar. 11, 2016) — Several years ago many Americans awoke to the outrageous mess this country was in.  A movement, not planned or anticipated, spontaneously spawned as groups formed all across this country comprised of concerned parents and grandparents who coalesced in a common cause.  So popular was this movement it actually inspired Tea Party type organizations in Europe, Asia and even the Middle East.

Those foreign groups, however, as much as they had passion and a desire to be free, they lacked a vital component.  That is, they lacked a legal support structure in the form of a constitution which could or would protect them against government tyranny.

The American Tea Party movement was not saddled with that deficiency.  Precisely because America did have such a constitution and these new patriotic organizations were able to form around that document as they began sounding the alarm bells concerning the chipping away of the liberties found therein.  The unquestionable need to prevent any further dilution of the founding documents became the binding core around which protests, rallies and the support of constitutionalist candidates were based.

Strong patronage of these values is why the Tea Party movement was so hated and feared by the left.  Successful manipulation of the people, by the progressives, requires ignorance of the constitution by the masses and politicians who disregard it.  If all of the above is true and it is quite doubtful that any of it can be denied, then one must then wonder or a least question, why so many patriot groups and individuals have forsaken the bindings of that core?

One might look at the average run of the mill voter, a father, husband, mother or wife and give them a pass on their lack of knowledge or Constitutional acumen.  After all, many if not most, have been schooled in liberal environments where social justice and inclusiveness are expounded while history and individualism are marginalized.

That same pass cannot, however, be given to those who claim to have risen up in defense of our founding documents as they now have joined with the progressive left in the adoption of the dangerous policy of choosing which law to abide and which to flout.   Many of the leaders, founders and organizers of the various Tea Party organizations have decided that they too will ignore the Constitution, thereby putting themselves in the same deceitful and dangerous road to tyranny as those they claim to have risen up to defeat.

Many who will read this and whom are the object of this discourse know in their hearts that when they support any unconstitutional activity, they are in a sense assisting the further weakening of the documents which have kept our country relatively free for over 200 years.   Some have offered, as a defense for this treacherous course, the statement that “they did it, so we can too.”

That thinking is precisely why it should be avoided.  Every breach of law transiting uncontested, provides a smoother path to the removal of the next chip off the support foundation of our liberty.  The only reasonable outcome will be that each new path down tyranny’s expressway will be less contested than the previous one.  No one in the patriotic organizations need be informed as to where that will lead.

Consider for a moment what chaos the civilized world would devolve into if law enforcement officials across the country decided to ignore murder after OJ Simpson was allowed to slaughter two individuals.   You may think this not a fair analogism simply because murder of people can’t be allowed.  But the slow murder of our liberty may in fact someday lead to many more deaths than just two.  If you doubt this, visit the history books concerning Mao, Stalin and Pol Pot, just to name a very few from a long list.

Many have, in an effort to avoid admitting that they are in the process of supporting unconstitutional deeds used the Bill Clinton defense which laughably has asked, what the meaning of is, is.  These same people who couldn’t believe that anyone could actually present that as a viable defense are now ready to apply it to the constitution.

The left has employed that tactic for decades now as they try to convince the courts, politicians and the people that the Second Amendment doesn’t say what it says.  Even though history, letters, documents and speeches produced in abundance by our founders clearly laid out what was intended, the argument of the left, over and over again, is that the Second Amendment did not include a description of certain words or phrases.

If anyone would like to know why the founders did not produce a glossary of terms and descriptions and attach it to the Constitution, the answer might be insulting to some.  The fact is, nevertheless, the founders anticipated that the people entrusted with the enforcement of these documents would not be idiots.    It looks like they may have gotten that wrong.

Now we get to the hub of this treatise.  There has been reams of papers and writings concerning the eligibility requirements to hold the office of the Presidency of these United States.  These articles have gone into the legal terms as well as the intent of the founders.  Most of it substantially enforces that Ted Cruz nor Marco Rubio conform.

So without going into too much of it, but for those who may have missed those tutelages, the following information is being supplied to you, as briefly as possible but with enough information that you will hopefully apply it to the points being made in the body of this article.

HERE ARE A FEW INDISPUTABLE FACTS
To be eligible to hold the office of the US Presidency, if a person was born after the signing date of the Constitution, he/she must be a “Natural Born Citizen”.

Article II included that requirement at the request of John Jay because he had strong concerns about allowing the Command(er) in Chief to have any allegiance to a foreign power.

There was no doubt that the definition of Natural Born Citizen meant a person who was born in a country to parents who were citizens.  They knew this because of the tome, Law of Nations, written by Vattel, which clearly describes it.

There is no doubt either that Vattel’s work was used by the authors of the Constitution by referencing it in many writings and journals.

Benjamin Franklin went so far as to purchase many copies of Vattel’s work, distributed them to some of the founders and even placed a copy in the research library which was used by the founders as they prepared the Constitution.

The amendment process can change the requirement related to eligibility, but no law or amendment can change the intent of Article II by changing the meaning of the term Natural Born Citizen.

The 14th Amendment did not nor could it redefine Natural Born Citizenship.  It dealt with awarding naturalized citizenship to specific categories of people and it did so within its authority.  In total it gave citizenship to persons born in this country to a parent who was living here under the jurisdiction of the US Government.  Therefore, the children of slaves who were here under the jurisdiction of the government were given naturalized citizenship. Naturalized and Natural born are two very different statuses.

Cruz was born in Canada to a father who was a Cuban National and a mother from Delaware.  Cruz holds only one of the requirements, his American mother, of the three required.  He is not eligible to hold the office of the Presidency. Period!

Rubio was born in America to two parents who were here legally and therefore they resided under the jurisdiction of the US Government.  However neither one of his parents were citizens of the US at the time of Rubio’s birth.  They were both Cuban Nationals.  Rubio is therefore not a Natural Born Citizen, but a naturalized citizen.  As with Cruz, Rubio too only carries one of the three requirements to be eligible.

In summation, let’s refer once again to the Patriots who do what they do and the good work they have done.  Many of their mission statements have declared the significance of the need to preserve America by means of defending our Constitution.

Those who would now forsake those proclaimed obligations in support of any one individual, will be recorded in history to be no less complicit in the demise of freedom than those who espoused hatred for our country.  Every chip off that foundation, regardless of who wields the hammer and chisel, whether it be for supposed good intentions or not, will carry forever an equal assessment of culpability.  That complicity will lie at the feet of friend and foe alike.

“Pretentious Patriotism” abets the unpatriotic as surely as every action elicits a reaction.  Each of which produce consequences, minute or major.  All of us need to contemplate how our patriotism will influence the stability of our country’s future?