A Mississippi state senator was quoted as having said after receiving the news, “The event at JCJC has been cancelled. Ted Cruz will not be in Mississippi tomorrow, as he evidently does not feel well. This is difficult news to deliver, but we trust that God has a plan for the campaign and for Mississippi.”

Also on Monday, Mississippi’s governor endorsed Cruz and urged his constituents to vote for him.

Breitbart identified Cruz’s canceled appearance as having been scheduled for “Jones County Community College,” for which “JCJC” might have been an acronym containing a typographical error.

At approximately 8:45 p.m. ET, Republican presidential contender Donald Trump tweeted that “Cruz came to Mississippi, there was nobody there, he left the state. I had a rally in Madison, MS with 10,000! Thank you!”

Cruz and his surrogates continued to issue tweets throughout the evening.

RealClearPolitics reported that a February 29 poll showed Trump leading in Mississippi with 41% support, followed by John Kasich at 20% and Cruz at 19%.

Also on Tuesday, Hawaii and Idaho will hold Republican caucused, while Michigan and Mississippi will hold primaries for both parties.

On Saturday, Puerto Rico’s Republican primary was won by Florida Senator and presidential contender Marco Rubio, who has won just one other contest in Minnesota since caucuses and primaries commenced this season on February 1 in Iowa.

Several political action committees have formed specifically to derail Trump’s candidacy.  On Saturday, Conservative Political Action Committee (CPAC) chairman Matt Schlapp chastised Trump for canceling his scheduled appearance last Saturday to campaign in Kansas, which Trump lost to Cruz by a wider-than-expected margin. Schlapp opined on Fox News and to Bloomberg News’s “John”  that Trump should have spoken at the event and “answered conservatives’ questions.”

In a play on Schlapp’s name, John asked the conference chairman if Trump had effected a “schlap in the face” by failing to make an appearance.

John made the case that Trump has taken a significant number of questions from “a lot of reporters” since beginning his campaign.  “What was the idea about taking questions…that he objected to?” he asked Schlapp, who responded that “When he comes here, conservatives are going to set the rules.”

Schlapp admitted that he was “disappointed” that Trump did not show.

The reporter then asked in a leading way if Trump had shown “a huge sign of disrespect,” to which Schlapp responded, “It’s disrespectful; it sends a message that there are priorities that are greater than talking to conservatives…”

Schlapp did not mention the voters who Trump chose to address as caucuses and primaries unfolded on Saturday, including in Kansas.  “It’s important to be here,” Schlapp concluded, citing the addresses given by Cruz and Kasich at CPAC which reportedly energized their audiences.

John then concluded that if Trump were to say that “if they claim anything than a scheduling conflict was at play here…” with Schlapp finishing with “That would not be honest.” 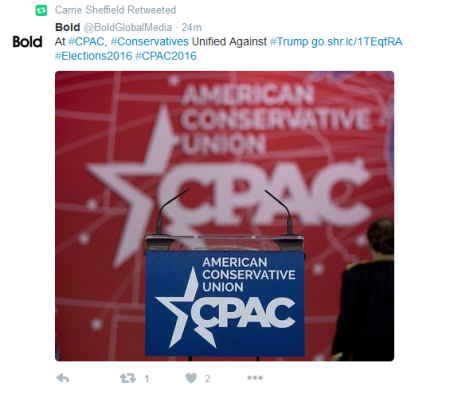 The straw poll taken toward the end of the CPAC convention showed Cruz leading with 40% support, Rubio with 30%, Trump at 15% and John Kasich at 8%.

Cruz claims that the media is withholding damaging articles on Trump until summertime, when the general election season will be in full swing, a theory which some journalists discounted.

Some believe that the momentum has shifted to Cruz and away from Trump in the primary contests.

On Saturday, Schlapp did not address The Post & Email’s tweet directed to him regarding the questions of Cruz’s constitutional eligibility and the fraudulent documents Barack Hussein Obama has presented to the public with impunity.

In the interview with Bloomberg, Schlapp maintained that the American Conservative Union (ACU), which underwrites CPAC, had “stayed neutral” in the presidential race.  He called Trump’s skipping of the last debate before the Iowa caucus a “whiff,” as he did Trump’s absence from CPAC to take questions from the “conservatives” there.

Former 2012 Republican presidential candidate Mitt Romney is reportedly discussing with other Republicans how to deny Trump the nomination should he garner the 1,237 delegates required to win it at the convention.  On Thursday, Romney spoke from the University of Utah in which he called Trump “a phony,” “a fraud,” and unsuited for the presidency.

Video of a Trump appearance in Madison, MS on Monday night is available through RightSide Network TV.

What Happened in Mississippi? added on Monday, March 7, 2016

2 Responses to "What Happened in Mississippi?"