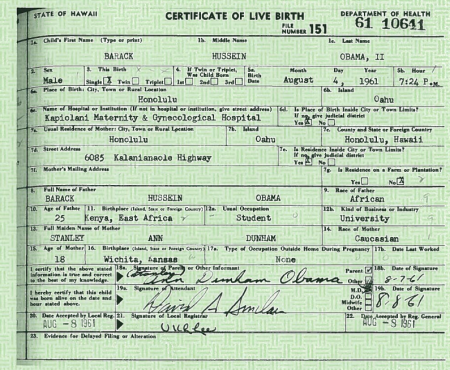 “Dishonesty is Donald Trump’s hallmark,” Romney said, among other accusations, including that he is a “con man.”

During the 2012 presidential election, Romney chose not to attack Barack Hussein Obama on many of his decisions and policies.  While campaigning in Michigan, he stated that “No one’s ever asked to see my birth certificate” in an oblique reference to the questions surrounding Obama’s birthplace and background, Romney did not raise nor investigate the reported forgeries of Obama’s long-form birth certificate and Selective Service registration form found by the Maricopa County, AZ Cold Case Posse revealed more than a year before.

On April 27, 2011, at Trump’s urging, the White House released what it said was a scan of a certified copy of Obama’s long-form birth certificate purportedly proving that he was born at Kapiolani Maternity & Gynecological Hospital in Honolulu on August 4, 1961.

During his speech on Thursday morning, Romney called Trump, who had endorsed Romney in 2012, a  poor businessman, contradicting the praise he had given him as a “job creator” on February 2, 2012, when Trump endorsed Romney’s candidacy against Obama.

On Thursday Romney also criticized Trump’s “personal qualities” and claimed that Trump “inherited his business; he didn’t create it.”

On June 16, 2015, Trump declared his presidential candidacy and $10 billion in assets from his numerous companies under the Trump Organization.  Unlike all other candidates this year, he is funding his own campaign.

On July 17, 2012, Zullo and Arpaio held a second presser during which they revealed more detail as to how the team had reached its conclusions.

Zullo has said that the fraudulent birth certificate was created and posted “with the intent to deceive” and that “there was no birth in Hawaii for Obama.”  No hospital in the world has claimed to be Obama’s birthplace.

Romney referenced the U.S. Constitution during his speech but has ignored Article II, Section 1, clause 5, which requires the president to be a “natural born Citizen” in relation to Obama and current presidential candidates.  On January 8, Romney said in a tweet that Sen. Ted Cruz is eligible, although Cruz was born in Canada to a Cuban-citizen father.

Arpaio indicated recently that a third press conference to reveal more information on Obama’s forgeries will be held if he receives “a couple of lucky breaks.”

In 2008 and 2012, Congress failed to investigate Obama’s background and eligibility.  This year, the eligibility of Cruz and Sen. Marco Rubio has been questioned, with the Republican National Committee (RNC) refusing to take a position on the matter or answer inquiries about it.

The Post & Email has requested by certified mail a certified copy of Democrat presidential candidate Bernie Sanders’ birth certificate as well as his father’s naturalization certificate, if it exists.  Historically, the meaning of “natural born Citizen” meant that foreign allegiance was precluded by a child born in the U.S. to two parents with U.S. citizenship.

Romney said that “Republicans” should vote for an unnamed better candidate to preserve the U.S. as a “shining city on a hill,” quoting a familiar phrase of Ronald Reagan.  In January 2015, Republicans took control of the U.S. Senate and consequently both chambers of Congress, which has gone on to grant funding for Obama’s plan to bring more Syrian and Middle-Eastern refugees and other projects of concern to millions of grassroots Americans.

“Republicans” have also failed to secure the borders with Mexico and Canada as well as limit the number of visas which allow foreign workers into the country, sometimes displacing American workers.

Romney tweeted his remarks and video following the address.  At 12:52 p.m. ET, The Post & Email returned Romney’s tweet with a link to this story.

4 Responses to "Who is Mitt Romney Calling “a Fraud?”"