(Feb. 29, 2016) — On Saturday, The Post & Email observed that presidential candidate Bernie Sanders has said at least twice on the campaign trail, “Nobody has asked for my birth certificate” in response to Americans, including presidential candidate Donald Trump, who in 2011 asked Obama to release his “long-form” birth certificate to prove his constitutional eligibility to hold the office of president and commander-in-chief.

Sanders appeared to believe that he has not been “asked” to produce personal documentation as a white man while Obama, who identifies as black, has.

In response to his initial claim, on January 12, The Post & Email sent the Sanders campaign a letter requesting a certified copy of his long-form birth certificate and naturalization document of his father, if it exists.

Sanders had said that his father immigrated from Poland in an attempted comparison to Obama’s father, who was not an immigrant, but rather, was present in the U.S. on a student visa between 1959 and 1964.

Barack Hussein Obama Sr.’s visa was reportedly non-renewed as a result of behavior he exhibited while on the Harvard campus, where he studied for his Master’s degree.

We received no response to our request from the Sanders campaign.  Last week, Sanders said for a second time during a campaign appearance that no one had requested his birth certificate and that the requests for Obama’s were an attempt to impugn his “legitimacy.”

On April 27, 2011, the White House released what it said was a certified copy of Obama’s detailed birth certificate held by the Hawaii Department of Health (HDOH).  Obama claims a birth on August 4, 1961 in Honolulu to a U.S.-citizen mother and British-citizen father from Kenya.  The long-form birth certificate image was declared a “computer-generated forgery” on March 1, 2012 following a six-month analysis by the Maricopa County Cold Case Posse under the direction of Maricopa County Sheriff Joseph M. Arpaio.

Arpaio has recently hinted at a third press conference to release more information on the probe following the March 1 and July 17, 2012 pressers.

On Monday morning, The Post & Email sent a letter by certified mail to the Sanders campaign with a copy of the previous correspondence.

On January 12, I wrote an initial letter requesting a certified copy of Mr. Sanders’s long-form birth certificate and his father’s naturalization form, if it exists.  I have enclosed a copy of that letter in the event you did not receive it.

I note that Mr. Sanders continues to say that “Nobody has asked for my birth certificate,” which is not the case.  As a member of the media, I am researching the constitutional eligibility of as many presidential candidates as possible, including Mr. Cruz and Mr. Rubio, both of whom had foreign-citizen parent(s) at the time of their respective births.

Is Mr. Sanders aware that the birth certificate to which he refers in his campaign speeches regarding Barack Hussein Obama’s “legitimacy” has been declared a “computer-generated forgery” by a criminal investigation, along with Obama’s Selective Service registration form?

It has been reported that a third press conference on the forgeries is planned for some point in the relatively-near future. 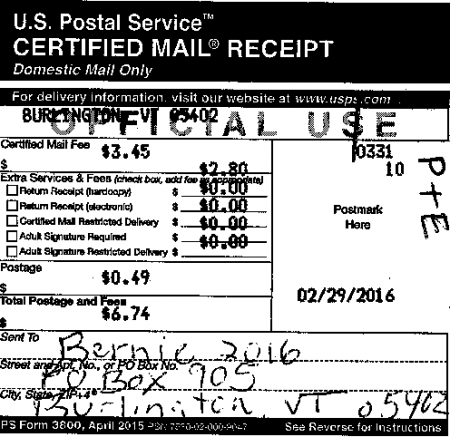