WHAT IS HE SAYING NOW?

(Feb. 29, 2016) — On February 10, after New Jersey Gov. Chris Christie withdrew from the 2016 presidential race, 2012 presidential candidate Mitt Romney, who has recently accused Republican candidate Donald Trump of “hiding” something by refusing to release his tax returns, praised Christie on Twitter for his “candor and integrity.”

Romney has not commented on Christie’s endorsement of Trump, which was announced on Friday.  On Thursday, Romney told Fox News’s Neil Cavuto that he believes there is a “bombshell” within Trump’s tax returns.  Since then, Romney has continued to push for their release.

On Monday, Romney condemned Trump on Twitter for “a disqualifying & disgusting response” to the endorsement of Trump issued by David Duke, head of the Ku Klux Klan. 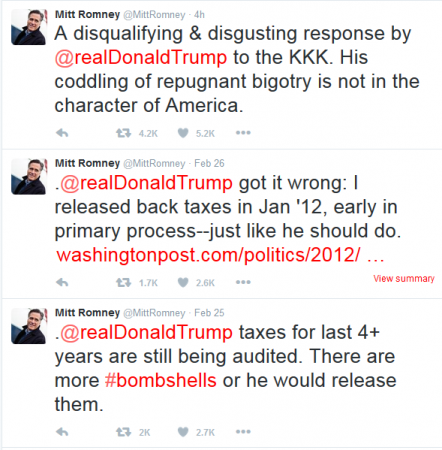 Trump had, in fact, previously disavowed Duke’s endorsement, a fact not consistently reported by the media. Trump campaigned for Romney in the closing days of the 2012 presidential race, a fact presented by The Post & Email last week to Romney in a return tweet which does not appear to have been published.

On Friday, former Trump adviser Roger Stone claimed that Romney is playing a key role in a plan launched by Republican operatives, involving the Koch brothers,, to derail Trump’s candidacy by heftily supporting Marco Rubio financially. Should that fail to result in Rubio’s winning of the Florida primary on March 15, Romney, according to Stone, will file the necessary documents to enter the race as a Republican contender in time for the California primary.

Under “Tweets & replies” in Romney’s account, there appear to be no replies from parties other than Romney, at least as of this writing.

On January 8, Romney tweeted that presidential candidate Ted Cruz is a “natural born citizen,” although if he was responding to another tweet, it does not appear in the Twitter feed.