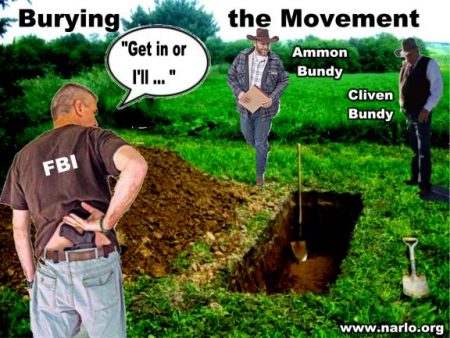 (Feb. 28, 2016) — “In Paris, I found myself surrounded by Germans; they were all over the place. They played music, and people would go and listen to them! All along rue de Rivoli, as far as you could see from place de la Concorde, there were enormous swastika banners five or six floors high.  I just thought, this is impossible.  Imagine that someone comes into your home—someone you don’t like—he settles down, gives orders: ‘Here we are, we’re at home now; you must obey.’ To me that was unbearable.”  ― Pearl Witherington Cornioley, Code Name Pauline: Memoirs of a World War II Special Agent

The French found themselves occupied by German forces that spawned the French Resistance.  Many of those in the Resistance paid with their lives in fighting a guerilla war against the Nazis.  They would have lost that war, to a man, had the U. S. not stepped in to defeat Germany and Italy in World War II.

Now, many farmers and ranchers in America are discovering that there is someone they don’t like settling down in their “home” and giving orders they must obey.   That this event would spawn a resistance, especially in the West, was not too hard to predict.  This semi-silent resistance, starting with the Sage Rebellion in the 1970’s, culminated in an armed standoff at the Bundy Ranch in Southeastern Nevada on April 12, 2014 where at least 400 civilians, some of them armed, confronted around 200 heavily-armed Bureau of Land Management (BLM) agents over rancher Cliven Bundy continuing to graze his cattle on federal land without paying the fees and in violation of two court orders.

The Nevada standoff, which resulted in an unexpected BLM stand-down, was the kindling and the spark that lit a fire for further open resistance against rising government intransigence in the management of federal lands that spilled over onto adjoining private ranch lands and the century-old tradition of raising cattle in America.

When Steven and Dwight Hammond, Oregon ranchers, were accused of arson and sent to jail for five years on trumped-up terrorist charges by the BLM, another spark hit the tinder-dry desert that resulted in the armed takeover of the Malheur National Wildlife Reserve in Oregon by none other than Cliven Bundy’s two sons, Ammon and Ryan Bundy.  The two sons were accompanied by a couple of dozen other armed militia and ranchers that had had enough of BLM bullies and decided to punctuate their displeasure with the display of guns in an open challenge to the FEDS.

One of those ranchers was Lavoy Finicum, who was gunned down by law enforcement at a roadblock on a rural Oregon highway.  Some say Finicum was murdered to silence him because of his open defiance of government on his own ranch.  The rest of the Bundy crew that occupied the Malheur Wildlife Preserve have been arrested and charged with multiple federal violations.  They are now in jail facing trial.

When Cliven Bundy flew to Portland to be with his two sons who were in jail from the Malheur Wildlife Preserve standoff, the FBI arrested him at the Portland Airport and charged him with multiple federal violations connected with the armed standoff in Nevada in April 2014.  Why they waited so long to arrest Bundy has yet to be disclosed by the FBI.

All of the Bundy men are now in jail.  A Federal judge has ordered the Bundys to be extradited to Nevada to face 16 federal charges in connection with the 2014 event.  This will be on top of the charges brought against the younger Bundys and others from the Oregon event.  Cliven Bundy was denied bail by an Oregon federal judge, stating that the elder Bundy was a flight risk.

U.S. Attorney Daniel G. Bogden expectedly said, “Persons who use force and violence against federal law enforcement officers who are enforcing court orders, and nearly causing catastrophic loss of life or injury to others, will be brought to justice.”

The Bundys and the other participants in the Oregon standoff will no doubt go to jail for a very long time.

We will set aside for the moment that what the Bundys did in either event was a direct violation of law and court orders.  Nevertheless, what most can’t seem to grasp, except maybe rural landowners, is that the Bundy-led events in Nevada and then in Oregon are bigger than the sum of those events.  They were and are a totally predictable equal and opposite reaction to the rise of government tyranny, driven and motivated by national and international radical environmentalism, á la Agenda 21.  The name “Bundy” has become synonymous with an almost totally Western mindset that epitomizes a national resistance movement against environmentally-motivated tyrants.

But the FEDS are determined to silence the Bundy movement and nip any spot fires from it in the bud.  They will, through the courts, make an example out of the Bundys for all those who might consider taking on the big, bad vicious wolf known as the federal government.  The trials for these men will be closed to the public.  News of the trials and the verdicts could be buried on page 23, if they appear at all.  Or, maybe the opposite will be true in the FEDS’ attempts to scare off any would-be Bundy wannabes:  you know, like Waco and Ruby Ridge.  The Bundys, for all intent and purposes, will be silent martyrs of an American resistance movement that the FEDS hope will fade into obscurity.

No, America has not morphed into the German Third Reich.  There are not Socialist Banners hanging on the side of buildings anywhere in America, or giant images of Obama.  The Nazi SS, or storm troopers, do not occupy the streets of America ….. yet!  We fully acknowledge that.  But tyranny comes in many forms and rises at different rates.  In Germany, the straw man was the infallibility of the superior Aryan race as perceived by Hitler.  All other races were inferior and it was the mission of the Germans to conquer and rule over all inferior races, by any means, or kill them outright.  And kill them they did, by the millions.  How is this any different than the current batch of insane Islamic Jihadists?

But today the straw man has become the infallibility of the environment.  It supersedes and takes priority over unalienable individual rights, by almost any means, including enforcement by the law and guns.  That this environmental infallibility would come in conflict with individual unalienable rights, especially here in America, was not only not hard to predict; it was pre-ordained.  We now live in worldwide environmental fascism.  The international climate initiatives to limit CO2 to allegedly protect the planet from MAN-CAUSED GLOBAL WARMING that came out of the Paris Climate Summit last December is just another tentacle of that fascism.  It is not about the environment, ladies and gentlemen.  It is about control of the masses and the transfer of America’s wealth, and so is this land battle raging in the West.  How dare we challenge government’s orders and their vast“ wisdom!”  Of course, they are never wrong and they never make mistakes.  In a pig’s eye!

“I put animals over peoples feelings ANYDAY. I would gladly step over a dying human to get to an injured animal. That’s how I am.” – Posted by AminalTales

The environmentalists, the Indians and the government are using the law and kangaroo courts to accomplish their means.  Constitutional property rights are overridden by judicial decrees.  The EPA, by fiat, is taking over all waters of America and thumbing its nose at Congress and the U. S. Supreme Court.  The EPA has become a fascist power unto itself, virtually without accountability.  Who got fired, or went to jail, in the Gold Mine spill in Utah?  No one!  Meanwhile, the Congress appears impotent, or reluctant, to stop them.

Indians are expanding their ancient treaty rights well beyond their reservations and are gobbling up more land, water and resources, with the help of foreign interests, environmentalists and the courts.  Powerful environmental groups lobby Congress and sue the government to accomplish their goals and at the same time reap large profits from court settlements, paid by taxpayer dollars.   Much of what is taking place is described by an article at the Land and Water USA website at this link:

The article includes a video by attorney Larry Kogan, describing how the “dirty” work has been and is being done by your government.

As more of this information sinks into the rural population, the Bundy Movement will only grow in size and force.  No matter what the government does to the Bundys, conflicts between rural landowners and the government will increase.  If the government’s hope was to silence the Bundy Movement by punitive actions and incarceration, they will be disappointed.  The actions by the Bundys, however ill-advised, have exposed a government that no longer preserves, protects and defends the unalienable rights of its citizens and instead is taking those rights away by force under the guise of radical environmentalism, just a different type of fascism.

So the question remains, at the present rate of the loss of liberty, how long will it be before an American version of the SS and storm-troopers are patrolling our cities, towns, villages and the countryside, as they did in Germany?  It won’t be very long (as we keep repeating) if “a critical mass of dedicated and courageous Americans don’t decide to resist government tyranny by acts of civil disobedience on a grand scale, punctuated by the threat of force if necessary, or by some other effective legal means.”

We could turn America around in one or two presidential election cycles with our three-part “legal” plan, provided there were enough dedicated souls and the funds necessary to implement the plan.  It’s taken the last 5 years to perfect that plan and we could accomplish it with an organization of much less than a “Critical Mass” ….. and enough money.  Like many patriots who want to see something positive occur in their lifetime, we grow weary of waiting.  It’s long past time to act.  If you would like to preview a brief summary of our plan, click HERE.

The FEDS Are Determined to Bury the Bundy Movement added on Sunday, February 28, 2016