CAN HE PROVE IT?

(Feb. 26, 2016) — On Friday morning, the Twitter account of presidential candidate Ted Cruz issued a tweet stating, “I’ve consistently stood up to both parties fighting for the people, and I’ll do the same as President!”

In light of Cruz’s renunciation of Canadian citizenship in May 2014 but no documentary evidence of U.S. citizenship at birth or any other time, The Post & Email responded, “Where is your proof of U.S. citizenship?” including a link to one of its many published articles on the topic.

Not surprisingly, we received no response to our tweet, although Cruz’s Twitter account issued repetitions of pledges made on Thursday night and in previous debates to “repeal Obamacare.” 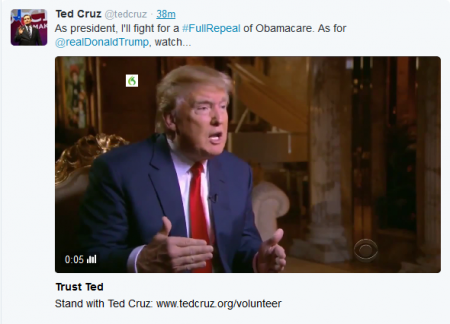 In another tweet, Cruz stated that “Marco Rubio and I would both be a much better president than Donald Trump” with a link to an article published in The Washington Times on Friday by the same name based on a post-debate interview Cruz gave to CNN.

CNN reported in June 2014, when Cruz’s renunciation of his Canadian citizenship became official, that he was “now a citizen of the United States — and the United States only.”  However, to The Post & Email’s knowledge, no documentation of U.S. citizenship has yet been produced by the Cruz campaign.  At issue with many is if Cruz was registered as a U.S. citizen at his birth, afterward, or not at all.  Approximately a dozen FOIA requests made by The Post & Email have not yielded an answer to the question.

When news of his then-Canadian citizenship was reported by The Dallas Morning News in August 2013 , Cruz’s U.S. Senate office erroneously denied its existence.

When Cruz was born in Calgary, Alberta, Canada on December 22, 1970, the Canadian law in effect at the time did not recognize dual citizenship and based citizenship on birthplace.  It is unknown if Cruz’s parents, presumably as foreign citizens there, registered him as a U.S. citizen born abroad at one of several U.S. consulates across the country.  Whether or not seven U.S. consulates in Canada existed in 1970 is not known.  The U.S. Embassy is located in Ottawa, Ontario.

On Friday morning, Gateway Pundit reported that “Marco Rubio and Ted Cruz were caught shaking hands in front of Trump during a commercial break at last night’s CNN GOP debate,” referencing a Fox News video in which a CNN report of the alleged meeting was discussed.

According to Cruz’s spokeswoman, Catherine Frazier, who denied Cruz’s Canadian citizenship, Cruz traveled overseas on a U.S. passport in 1986 for a high school trip.  That documentation has not been released, and the U.S. State Department will not release information on third parties without their expressed written consent.

In October 2012, Trump issued a challenge to Obama in which he offered him $5 million, and then $50 million, to release his college and passport application forms.  Both challenges were ignored.  Trump has said that he suspects that Obama either falsely reported himself as a foreign student to obtain financial aid set aside for that purpose or that Obama accurately applied for the aid as a foreign student.

As for Trump on Friday morning, he tweeted: