(Feb. 22, 2016) — Presidential candidate Sen. Ted Cruz has “asked for the resignation” of his national spokesman, Rick Tyler, according to The Washington Times on Monday.

The Times quoted Cruz as having called Tyler a “staffer,” although he has been identified as the “Communications Director” for the Cruz campaign.

CNN also referred to Tyler as a “national spokesman,” as has Fox News.

The firing came about after Tyler reportedly inaccurately portrayed on Sunday a statement made by presidential candidate Sen. Marco Rubio about the Bible to a Cruz staffer captured on video.

Previously, Rubio, Donald Trump and Dr. Ben Carson, all competing in the presidential race, accused Cruz of “dirty tricks,” beginning with the Iowa caucuses on February 1 when Cruz staffers circulated a false story about Carson’s having decided to quit the race that evening.

Cruz apologized to Carson, although notably blaming the false “news” on his staff and CNN.

CNN maintained that it never reported that which the Cruz campaign began circulating just as voting began in Iowa.

Two days later, political analyst Karl Rove explained on Bill O’Reilly’s show how the false story could have taken votes from both Carson and Trump, the latter of whom was projected to win the Republican Iowa caucus vote by approximately five points.

Cruz won the caucus by the same margin.

CNN quoted Cruz as having said of the incident, “I have made clear in this campaign we will conduct this campaign with the very highest standards and integrity.”

On Sunday, Tyler had apologized on his Facebook page, stating that he had made an assumption based on “unclear audio.”

Rubio’s response to the incident is quoted as, “It’s every single day, something comes out of the Cruz campaign that’s deceptive and untrue, and in this case goes after my faith. So I understand, I guess one of their spokespersons apologized and I’ll accept his apology, but this is a pattern now and I think we’re now at a point where we start asking about accountability.”

As of 4:17 p.m. on Monday, Tyler’s Facebook page still lists him as “Communications Director at Ted Cruz.” 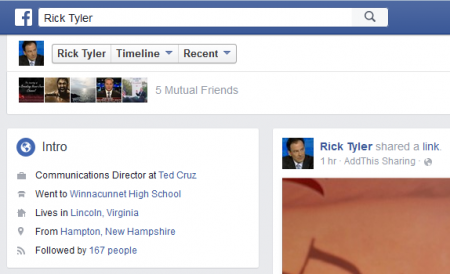 At the 3:19 mark, Tyler discussed his mistake with Fox News’s Martha MacCallum, stating that the original source was “sticking by” its version of the video transcript.

Breitbart News has reported that Rubio is also dishonest.

The constitutional eligibility of both Rubio and Cruz has been questioned by Trump, who in 2011 placed pressure on the White House to release Obama’s “long-form” birth certificate, which was later found by criminal investigators to be fraudulent.